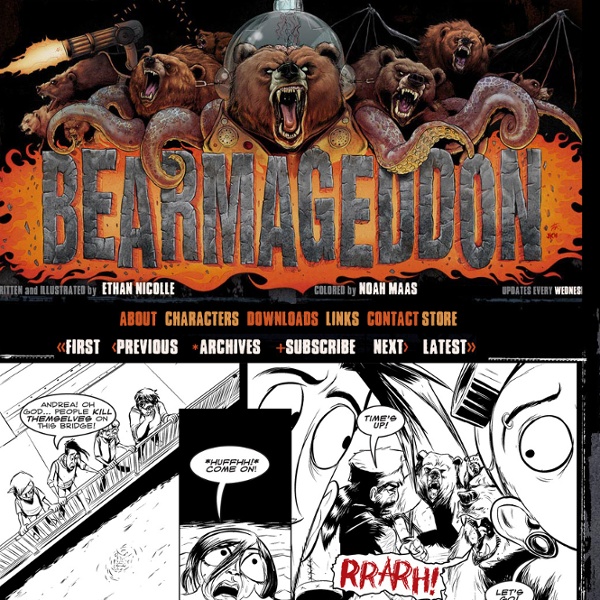 Three Panel Soul Tasty Flesh - #1 Well, shit. Tasty Flesh takes lots of time to create, but you have the power to keep these badass gals coming regularly. Here are several things you can do to help! 1. Tasty Flesh merch! Grab a bonafide Tasty Flesh t-shirt or a Dead Ringer custom zombie sculpt. 2. 3. 4. 5. Lackadaisy Expressions Boy, I didn't know what I was getting myself into when I started this. I've had requests for some sort of expressions tutorial dating back a while now, so I figured, "Sure! I can explain expression drawing...and it'll be way better than all those tutorials out there that are nothing but charts of generic expressions. Yeah! Um. Anyway, I found all I could really do was try to explain ways to teach yourself...and then add some pictures.

0 With that, Captain gestured towards the frozen wasteland in a long, dramatic pause. I lifted a brow, wondering which question was best to utter first. My Directorate issued Dead Zone Tour Guide Emotive-Goggles lifted one of their lenses, replicating my facial expression. “...So, what am I supposed to call you?” I asked finally. I stared at the self-proclaimed lord incredulously, it appeared that "Zee Captain" was completely serious. "The end of the world isn’t the best time to start getting picky about who you hang out with," I thought. My own tired mind was acting rather odd. It's as if something was wrong with my brain, whenever I thought of it, my thought-pattern skipped a beat and simply settled on "Captain". “My name is Charles Snippy,” I introduced myself. My enigmatic acquaintance wore a respirator, like all humanoids in the wasteland. SNIPS, SNAPS, SNOOPS, SNEEEEPZ, SNIP-PIE, SNAPPER, SNIPPING, SHNIPPENG, ZSHNIPPEH, SNOPPEH, SNAIPPEH, SNIPPEH!” "Unfortunate circumstances?

Multiplex - a comic strip about life at the movies Under The Flesh - Comic #1 - "Desolation Day" - Cover In a world ravaged by an unknown virus which only infects males, mankind's last hope lies in a single soldier... Comic #1 - "Desolation Day" - Cover Author Notes: Ch 1: "Looking Forward To The Apocalypse" - Pg 1 | The Last Nerds on Earth Ah, the age old question: do those really count a zombies? Many a debate has been held about what constitutes an actual zombie. New-age zombie fans seem to think anything with cannibalistic tendencies count as zombies, ala 28 Days Later. Purists, on the other hand, basically have the mindset of "Romero or bust." Personally, I tend to skew towards the purists. So where do YOU stand?