Creative Uses of Magic in Your Fantasy Story 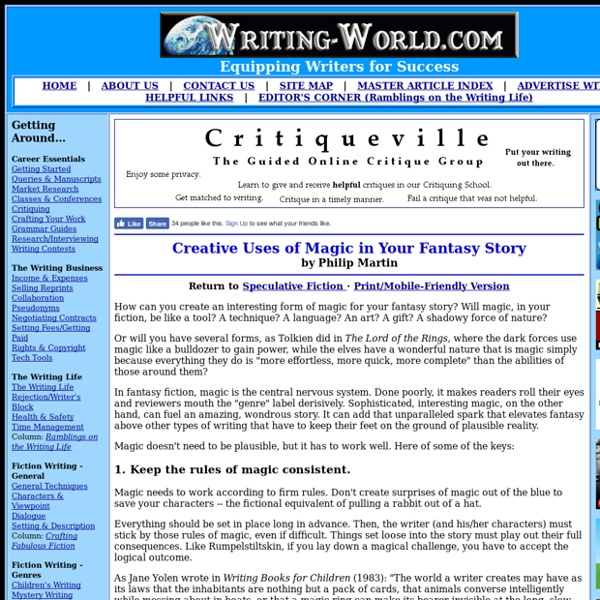 Creative Uses of Magic in Your Fantasy Story by Philip Martin Return to Speculative Fiction · Print/Mobile-Friendly Version How can you create an interesting form of magic for your fantasy story? Will magic, in your fiction, be like a tool? A technique? Or will you have several forms, as Tolkien did in The Lord of the Rings, where the dark forces use magic like a bulldozer to gain power, while the elves have a wonderful nature that is magic simply because everything they do is "more effortless, more quick, more complete" than the abilities of those around them? In fantasy fiction, magic is the central nervous system. Magic doesn't need to be plausible, but it has to work well. 1. Magic needs to work according to firm rules. Everything should be set in place long in advance. 2. For dramatic impact, as important as the powers of magic are its limitations. In the Harry Potter books, Harry's nemesis, Lord Voldemort, has great powers, but even so, those powers are limited. 3. 4. 5. 6. 7. Related:  How to write a book • Sci-fi and/or Fantasy Writing tips

30 Days of WorldBuilding By popular demand, you can now download the Magical WorldBuilder Guide in three easy-to-carry (non-DRM) formats: PDF for printing out at home or reading on a computerePub for use with many fine ereader devicesMOBI for use with Kindles and MobiPocket software.As of 2007, The world-builder exercises are licensed under a Creative Commons license to help you in deciding whether you can translate (yes, with credit back), distribute to your writing group (yes, with credit), sell (not without permission), reprint (yes, for non-commercial purposes), or mirror (yes, with credit back) this useful guide! In October, 2004, I posted 30 days of world-building exercises to the NaNoWriMo discussion forums. These are short, 15-minute exercises that can help you make crucial decisions about your world, and what you want your story to say about it. These exercises have been edited for general use and re-posted here. So, give yourself 7 and a half hours this month-- 15 minutes a day-- to build a world.

Science and Magic Holly Lisle's Vision John Ward ©2001, John Ward “Any sufficiently advanced technology is indistinguishable from magic" - Arthur C. Clarke Many times, fantasy seems to be the Goodwill Store of literature. Nowhere is this repetition of ideas more apparent than in the magic systems of the worlds that we create. A great example (actually, a perfect example) of using physics to define a magic system is Holly Lisle's article that explains the magic system of her fantasy world from the Secret Texts series. Scientific thought and theory are waiting to be exploited by the fantasy writer. Sp(20)_1 X U(1)^2 Do you need to understand these glyphs? Once you gain access to this material, you will learn that they explain many things that most fantasy writers never stop to ponder. Let’s make our magic more interesting by making it more realistic. 1. 2. 3.

Victorian Era Names, A Writer's Guide circa 1840's-1890's Being a compilation drawn from old census and vital statistic records. A large part of creating a good set of characters in fiction writing is giving your imaginary populace good names. The same holds true for writing stories set in the 1800's. Nor was it unusual for parents to look closer to home, borrowing from close friends or people they admired. In a few places on this list, I have enumerated certain first and middle names together, (such as Sarah Ann,) because I find them joined thus so many times on old public records, that it is apparent those name-pairings enjoyed great popularity. Special thanks to Christine/Sevenstars, for her comments and assistance with this collection. Compiled by G. Old West Slang Writer's Guide ~ Colorful sayings for colorful characters, and links for research and study of the Old West.

Thoughts on Creating Magic Systems at SF Novelists David B. Coe July 21st 2011 I’ve written before, on other blogs (including a site I maintain with several other fantasy authors) about creating magic systems and what I feel such a system needs to read as “real.” In recent months, though, I’ve been thinking about magic a bit differently, in part because I’m now writing historical fantasy and contemporary urban fantasy rather than the alternate-world epic fantasy I’ve published throughout my career. Let me start by saying that I approach the creation of a magic system with a fair amount of rigor. Over the years, when I have created magic systems, I have followed three basic rules. Recently, I have come to recognize one more component of a successful magic system. For my contemporary fantasies, I have tried to create magic systems that draw upon existing elements of our world. Those are the things I’ve been thinking about recently when creating magic. Filed under For Novelists, our books, writing process.

The Top 10 Relationship Words That Aren't Translatable Into English | Marriage 3.0 Here are my top ten words, compiled from online collections, to describe love, desire and relationships that have no real English translation, but that capture subtle realities that even we English speakers have felt once or twice. As I came across these words I’d have the occasional epiphany: “Oh yeah! That’s what I was feeling...” Mamihlapinatapei (Yagan, an indigenous language of Tierra del Fuego): The wordless yet meaningful look shared by two people who desire to initiate something, but are both reluctant to start. Oh yes, this is an exquisite word, compressing a thrilling and scary relationship moment. It’s that delicious, cusp-y moment of imminent seduction. Yuanfen (Chinese): A relationship by fate or destiny. From what I glean, in common usage yuanfen means the "binding force" that links two people together in any relationship. But interestingly, “fate” isn’t the same thing as “destiny.” Retrouvailles (French): The happiness of meeting again after a long time.

Magic-like Psychic Abilities Holly Lisle's Vision By Jim Mills and Dawn Greenlee ©2001, Jim Mills and Dawn Greenlee In collaboration with my good friend, Dawn Greenlee, I have written several SF and fantasy novels. For the purposes of this discussion, I am going to concentrate on Secret Psychics and the efforts that went into the background work -- specifically, how we devised the "rules" for how psychic abilities function. Like in many works of speculative fiction, Dawn and I started with a "What if" question. We started by deciding what we didn't want: mages chanting spells and making arcane gestures were out. In order to document how all of this would work, I turned to Holly and followed her teachings. All of Holly's "How to" articles and a lot of other very good information can be found at the Forward motion web site: A: Special physics. 1. 2. 3. We used the Champion ™ game mechanics, mostly limited to low-level powers. 4. The Others first appeared in New Mexico in 1947. 5. 6. 1. 2.

How to write a book - Now Novel Fantasy Holly Lisle's Vision By Jim Francis ©2001, Jim Francis One of the fun things about magic stories is, well, the fun. Take a look at the magic your characters can work. What might go wrong when your average magic-practicing and harassed housewife needs to go to the supermarket, or mall? She keeps her Palm locked away because her husband tends to play with things. She comes back ,hits enter, and the computer speakers intone the spell. At the check out her debit card is rejected, and the cashier hits a key. The adventure, however, is not yet over. Misktakes In Writing Here's the slightly revised and updated text of an article I wrote a while back. It seems to have done a lot of folks a lot of good as they have set out to learn the craft of writing fiction. Note: Except for the links to my Home page and the list of my books, all of the links and jumps in this article stay inside the document. You can save it to disk, load it to your Web reader off-line, and jump from item to item without accidently popping off into some other file in Katmandu. by Roger MacBride Allen You can read straight through or jump to: Roger MacBride Allen's Home Page A list of Roger MacBride Allen's books Introduction Errors of Style: Passive Voice Inappropriate Use of Summary Narration Point of View errors Poor Choice of Tense and Person Time Control Errors Unnamed Characters Errors of Substance: The Weird Opener & The Unintergrated Opener Retread of the Same Old Same Old Confusing the Author's Motives with the Character's Failure to Deal with Consequences Development Errors Bad Planning 1. 2.

Defining the Sources, Effects and Costs of Magic by Lital Talmor So we have a hero: tall and handsome, with a mysterious past, a claim for the throne and an arch-enemy. Oh, yes, and he can do magic. When writing fantasy fiction, especially when magic is involved, you get to set all the rules. Magical By Definition There are, in general, two types of magic: passive and active. magical creatures (dragons, manticores and the sort), and magical phenomena (such as storms of crystal raindrops). Active magic is defined as a noun: "The art that purports to control or forecast natural events, effects, or forces by invoking the supernatural". Source What allows certain people to manipulate reality at their will? If internal, then magic is a function of either the body or the mind. External sources may be The Spirit of the World, a God, a magical artifact, and the like. When working with an external source of magic, you can make it more distinctive by applying certain restrictions: How often can one draw on that source? Technique Range Effect Cost

Related:
Related:  How to write a book   -  Sci-fi and/or Fantasy Writing tips