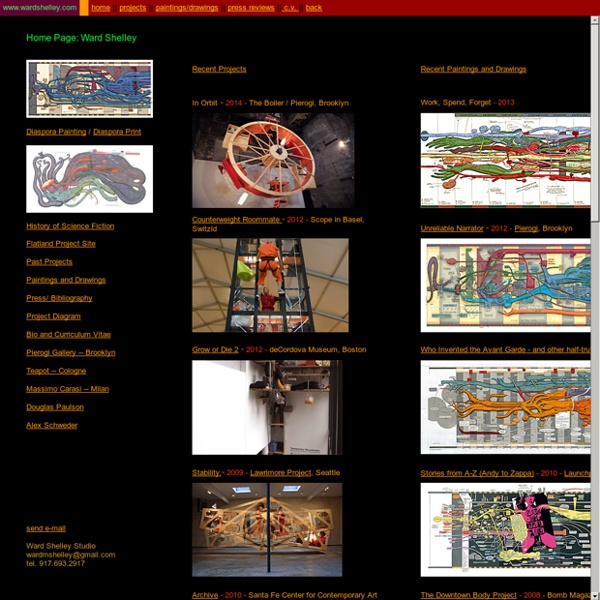 'Mapping Brooklyn,' a Joint Exhibition of BRIC and the Brooklyn Historical Society, Explores the Complexities of the Borough Logan Square: the "Brooklyn" of Chicago. Oakland: the "Brooklyn" of San Francisco. NYC's 71-square-mile borough to the east has become such a strong cultural metaphor, so easily abstracted to explain other cities, that one can lose sight of the things that make it Brooklyn, not "Brooklyn." Recognizable Geometry: Wolfram Physics Project Technical Background Particularly for potential applications to fundamental physics, it will be of great importance to understand what happens if we run our models for many steps—and to find ways to characterize overall behavior that emerges. Sometimes the characterization is easy. One gets a loop with progressively more links: {{x, y}} -> {{y, z}, {z, x}} ResourceFunction["WolframModelPlot"][#, "MaxImageSize" -> 100] & /@ ResourceFunction[ "WolframModel"][{{x, y}} -> {{y, z}, {z, x}}, {{0, 0}}, 5, "StatesList"]

An Illustrated Guide to Space Maps Nebra Sky Disc, Germany, 1600 BC. (Photo: Rainer Zenz/WikiCommons CC BY-SA 3.0) With its patinated bronze background and shiny gold sun, moon and stars, the 3600-year-old Nebra Sky Disc is worth gazing at for its beauty alone. What Is a Particle? Given that everything in the universe reduces to particles, a question presents itself: What are particles? The easy answer quickly shows itself to be unsatisfying. Namely, electrons, photons, quarks and other “fundamental” particles supposedly lack substructure or physical extent. “We basically think of a particle as a pointlike object,” said Mary Gaillard, a particle theorist at the University of California, Berkeley who predicted the masses of two types of quarks in the 1970s. And yet particles have distinct traits, such as charge and mass. How can a dimensionless point bear weight?

New London Model A 1:2000 scale interactive model of central London is now on display at The Building Centre as part of NLA’s new permanent exhibition. The model brings the story of London’s historical and physical development to life through a sophisticated projection system integrated with films. At 12.5 metres-long, the model covers more than 85 square kilometres of London, 19 Boroughs and approximately 170,000 buildings, including 34km of the Thames with its corresponding 21 bridges. It extends from King’s Cross in the north to Peckham in the south and the Royal Docks in the east to Old Oak Common in the west. Touchscreens allow buildings and major infrastructure projects to be brought to life across the surface of the model, showing the key areas of change and revealing the sheer scale of proposed development in the capital.

Where Americans Find Meaning in Life Economic, religious and political divides shape where Americans find meaning – but family, career and friendship emerge as common themes What makes life meaningful? Answering such a big question might be challenging for many people. Even among researchers, there is little consensus about the best way to measure what brings human beings satisfaction and fulfillment. Traditional survey questions – with a prespecified set of response options – may not capture important sources of meaning.

Ten facts about the economics of climate change and climate policy Fact 1: Damages to the U.S. economy grow with temperature change at an increasing rate. The physical changes described in the introduction will have substantial effects on the U.S. economy. Climate change will affect agricultural productivity, mortality, crime, energy use, storm activity, and coastal inundation (Hsiang et al. 2017). In figure 1 we focus on the economic costs imposed by climate change in the United States for different cumulative increases in temperature. It is immediately apparent that economic costs will vary greatly depending on the extent to which global temperature increase (above preindustrial levels) is limited by technological and policy changes.

map-of-the-internet-10-explore-this-beautiful-handdrawn-map-of-the-online-world-9098834 Vargic began the project in December 2013, using old National Geographic maps for visual inspiration and Alexa data of the most visited websites in the world to scale the different land masses. Perhaps the amazing fact is that the map was drawn free hand, directly into Photoshop. "My map is divided into two distinct parts,” Vargic explained to The Independent. “The eastern continent, the Old World, showcases software companies, gaming companies and some of the more real-life oriented websites."

Double tipping points in 2019: When the world became mostly rich and largely old When it comes to economic development, positive change is typically gradual and only noticeable over long periods of time; by contrast negative developments—economic crises—are often rapid and spectacular. This creates a biased narrative that focuses on negative news, while positive trends go unnoticed because they are less dramatic. In this blog, amid an atmosphere of deepening gloom about prospects for the world economy, we want to draw attention to two long-term trends that illustrate the significant progress being made by most of humanity.

The most expensive paintings sold in Europe, in one gorgeous map Created by howmuch.net, a cost information site, this map shows the most expensive art works ever created by an artist of that nationality or painted in that country. The authors have created maps for other continents as well, but the European map is probably the most interesting, for its diversity of color and name recognition. Topping the list of the continent’s most expensive paintings is “Les Femmes d’Alger” (“The Women of Algiers”) by Picasso of Spain. Despite being one of Picasso’s less famous works, the painting sold in May for $179 million, a new world record — prompting commentators to ask, “Is any painting really worth $179m?” The rest of the list also reads like a Who’s Who of art: Works by Edvard Munch of Norway, Gustav Klimt of Austria, Britain’s Francis Bacon, Van Gogh of the Netherlands, Gerhard Richter from Germany, Amedeo Modigliani from Italy, Peter Paul Rubens of Belgium and Kazimir Severinovich Malevich of Russia.