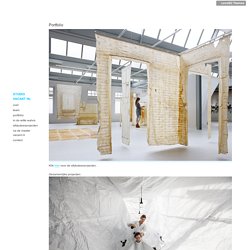 Alban Karsten. Mushroom the New Solution to Plastics. Imagine a life without any plastic around! 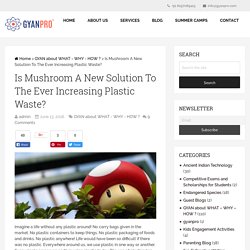 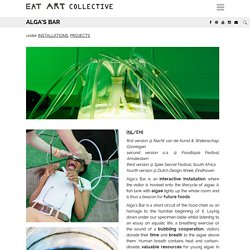 A fish tank with algae lights up the whole room and is thus a beacon for future foods. Alga’s Bar is a short circuit of the food chain as an homage to the humble beginning of it. Laying down under our specimen-table whilst listening to an essay on aquatic life, a breathing exercise or the sound of a bubbling cooperation, visitors donate their time and breath to the algae above them.

Eva Rust. Life at the Edges - Science Gallery. How the humble sweatpants became “critical wearables” While in Brussels last month, i went to BOZAR to see Somewhere In Between, an exhibition that “provides a unique window on today’s artistic hotbeds of Europe.” 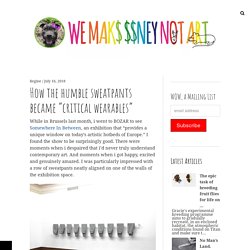 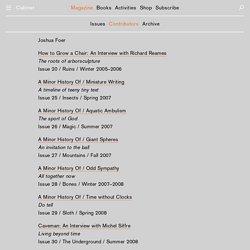 ROBOTANICA – The New Wilderness. Plasm / Tez (NL/IT) It’s a great pleasure to announce the premiere of the Plasm performance by artist Tez. 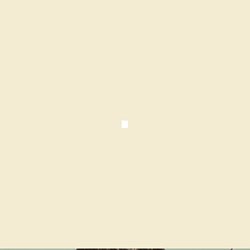 Plasm aims to explore and revive Alan Turing’s research into morphogenesis – the chemical basis of spontaneous pattern formation in the natural world. By means of an AI driven, custom built software system, movements and body sensors are read and translated into control for sound. With Plasm, interdisciplinary artist Tez immerses his audience in an experience that delves deeper into the ever-evolving environment of organic forms: living cells, tissue, organs, and other lifelike formations. www.tez.it Seamless / Theo Triantafyllidis (US/GR) The difference between nature and landscape is the presence of humans.

Transnatural Art & Design - Balancing Nature & Technology - ROBOTANICA. ___ It seems we are witnessing a shift in time with the arrival of robotic creatures and evolved hybrid species in the natural environment. 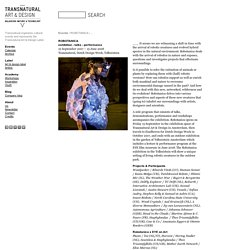 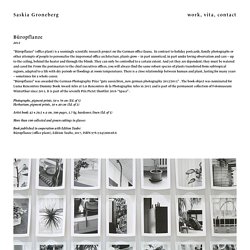 In contrast to holiday postcards, family photographs or other attempts of people to personalise the impersonal office architecture, plants grow – in part unnoticed, in part under loving observation and care – up to the ceiling, behind the heater and through the blinds. They can only be controlled to a certain extent. And yet they are dependent; they must be watered and cared for. From the postmasters to the chief executives offices, you will always find the same robust species of plants transferred from subtropical regions, adapted to a life with dry periods or floodings at room temperatures. Ward Shelley Homepage. Alex Schweder. Ian Ingram. Marvelous Meat (2016) Doctor Maggotty is Anxious about The End (2015) Lizardless Legs (2014) The Gap Crack Gang (2013) 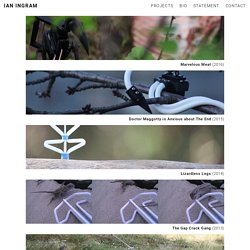 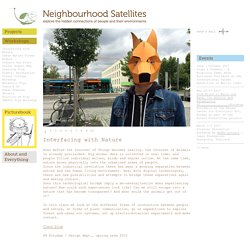 Big animal data is collected in real time, and people follow individual wolves, birds and sharks online. At the same time, nature moves physically into the urbanised areas of people. Since the industrial revolution there has been a growing separation between nature and the human living environment. Studio 1:1 › alle projecten. Didier Faustino. Archigram. Ant Farm (group) Ant Farm was an avant-garde architecture, graphic arts, and environmental design practice, founded in San Francisco in 1968 by Chip Lord and Doug Michels (1943-2003). Superstudio - Google Search. Haus rucker - Google Search. Breath (BRH) – inflating crpyto with lung power. Building for Water Collection with Buckets. Future Bodies – Bart Hess. Modular body. Jaemin Paik. When We All Live To 150 2012, Jun 1 year Research Project, Mixed media How would family life change if we all lived to one-hundred and fifty or beyond?

With up to six generations living together, and the possibility of huge age gaps between siblings, the traditional model of the family would change dramatically, perhaps even becoming unsustainable with the burden of its large membership. Institute of Critical Zoologists. "The work to follow is an exploration of these complexities and reminds us that birds occupy a large and central part of that universe that human beings constantly carve out of nature. " Ding Li “In contemporary society birds are, perhaps, both the most watched and most eaten animal on our planet. They have become a focal point of debates about a 'proper' relationship between humankind and nature, and about definitions of humanity itself.” Naoko Noguchi Against the very real environmental drama unfolding across the globe, multidisciplinary artist Renhui Zhao presents the exhibition A Bird in the Hand.

We Make Money Not Art. Dunne & Raby. Atelier van Lieshout. Earth Porn vs. Reality. Every Frame a Painting. Nerdwriter1. ⟣ Projects ⟢ — ⟜ R a c h e l ⋅ S u s s m a n ⤀ Clarify today, design tomorrow. Thomas Thwaites - The man who tried to live as a GOAT, living as part of a herd in the Swiss Alps. Machinefabriek - Crumble released. Lambert Kamps, Studio for Art & Design in Groningen, The Netherlands. / News. News - Studio Makkink & Bey. Olaf Stapledon. William Olaf Stapledon (10 May 1886 – 6 September 1950) – known as Olaf Stapledon – was a British philosopher and author of influential works of science fiction.[1][2] In 2014, he was inducted into the Science Fiction and Fantasy Hall of Fame. Life[edit] During the First World War he served as a conscientious objector.[2] Stapledon became an ambulance driver with the Friends' Ambulance Unit in France and Belgium from July 1915 to January 1919; he was awarded the Croix de Guerre for bravery.[5] On 16 July 1919 he married Agnes Zena Miller (1894–1984), an Australian cousin.[2] They had first met in 1903, and later maintained a correspondence throughout the war.

They had a daughter, Mary Sydney Stapledon (1920–2008), and a son, John David Stapledon (1923–2014). In 1920 they moved to West Kirby. On Stapledon's religious views, he was an agnostic.[8] Stapledon was cremated at Landican Crematorium. Works[edit] Bibliography[edit] Fiction[edit] Non-fiction[edit] Poetry[edit] BLDGBLOG. Politics of Space and Bodies. ArjenLucassen.com. Cascoland. Dominic Wilcox portfolio, news and videos. Rural and Proud. Arjen Boerstra - Visual Art - Beeldende Kunst. Andrea Zittel. T A K E H I T O / E T A N I. Kenichi okada / projects. Scarcity of hunger - wei. Scarcity of hunger Feed me next meal Scarcity project with Het Nieuwe Instituut, Rotterdam, 2013-2014 - In this fast-paced society, we take it for granted that hungry feeling can be solved immediately. With all the prepared food and fast food around us, we can get food easily from 24/7 stores in next corner and feed ourselves within 10 minutes.

This project originated from the high density of convenience stores in Taiwan. According to research in 2009, Taiwan has 9204 convenient sores. These years, convenience store recipes are popular on Internet and mobile apps in Taiwan. It seems like prepared food and fast food industries start to dominate the trend of food consumptions and markets, and gradually change our food cultures and eating habits. Scarcity of Hunger starts from an assumption that hungry feeling doesn’t exist anymore in modern society. How is possible to slow down the pace of eating habit, to extend the waiting time, and to bring the profound hungry feeling back? Bon appétit! Atelier Mats. Index. Auger Loizeau.