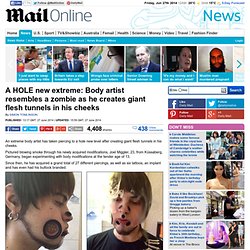 Ohio man busted for sex with pool float... again. Men who dress up as rubber dolls speak out in Secrets of the Living Dolls documentary. Stars of new Channel 4 documentary, Secrets of the Living Dolls Unlike transgenders, ‘rubber dollers’ don't feel born in the wrong bodyDressing up as a member of opposite sex is way to have fun By Ruth Styles Published: 09:00 GMT, 6 January 2014 | Updated: 20:59 GMT, 6 January 2014 With her long blonde locks, curvaceous figure and elfin features, 40-something Sherry is a woman few men would turn down. 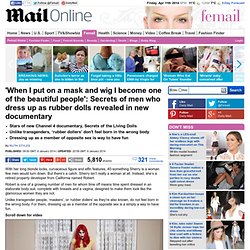 But there’s a catch. Sherry isn’t really a woman at all. Robert is one of a growing number of men for whom time off means time spent dressed in an elaborate body suit, complete with breasts and a vagina, designed to make them look like the glamorous women they are not. Unlike transgender people, ‘maskers’, or ‘rubber dollers’ as they’re also known, do not feel born in the wrong body. Scroll down for video ‘They’re just like what they call “vanilla people” - that’s you and me - except for at night or on special occasions, they like to put on a mask. Hooked on you! The extreme body art fans who love nothing better than being suspended by metal barbs in their back. 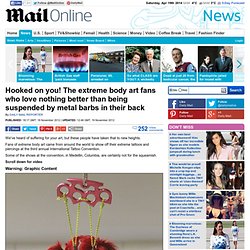 Fans of extreme body art came from around the world to show off their extreme tattoos and piercings at the third annual International Tattoo Convention. Grieving Belgian woman sleeps next to the grisly remains of her dead husband for almost a year. WARNING: GRAPHIC CONTENTIt's thought that an asthma attack killed the man, from Brussels, last yearThe neighbours weren't suspicious, but unpaid rent alerted the authorities By Ted Thornhill Published: 16:56 GMT, 19 November 2013 | Updated: 20:00 GMT, 19 November 2013. 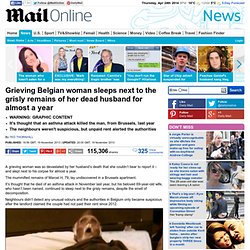 'I'm gonna have my son back': Father finds missing son was 'locked in a room for years and so malnourished that he still had baby teeth' after 15-year search. Tony Wawrzynski of Nevada was informed by Georgia detectives that his long-lost son, now 18, is the alleged victim in a Georgia abuse scandalWawrzynski said his son, Mitch, was kidnapped by the boy's mother 15 years agoA retired policeman found Mitch in Los Angeles looking malnourished, confused and only around 12 or 13 years old Mitch told police he was put on a bus to California on his 18th birthday by his stepfatherHe said his parents had barely fed him and forced him to stand on his tiptoes, facing a wall, with his hands on his head for eight hours every dayHis two stepsisters said they could hear him cry and scream for food By Daily Mail Reporter and Associated Press Published: 01:16 GMT, 26 October 2012 | Updated: 03:29 GMT, 26 October 2012 Found: Tony Wawrzynski of Reno, Nevada has found his son that was kidnapped by the boy's mother 15 years ago -- and the boy is believed to be a victim in a Georgia child abuse scandal 'They both conceded that that was his life,' Morgan said. 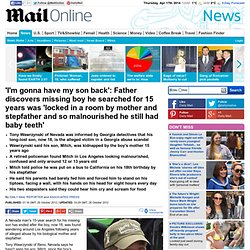 The man who is in love with INFLATABLES and says he would marry his favourite... a dragon named Lila who he sleeps with every night. Mark, 20, keeps 15 inflatables at his homes in Redlands in California He claims he is in love with a blow-up yellow dragon called LilaMark believes his addiction began he got a pool inflatable when he was 14 By Suzannah Hills Published: 10:42 GMT, 14 February 2013 | Updated: 09:00 GMT, 15 February 2013 Many people will be taking time out today to do something special for their loved one on Valentine's. 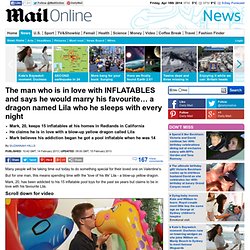 Japanese man who cooked his genitals and served them up to paying guests is charged with indecent exposure. They were garnished with mushrooms and parsleyFive guests paid around £160 each for the mealHe could be jailed for up to two years or fined $32,000 By Daily Mail Reporter. 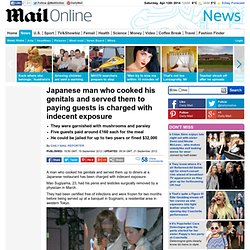 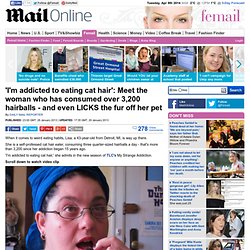 She is a self-professed cat hair eater, consuming three quarter-sized hairballs a day - that's more than 3,200 since her addiction began 15 years ago. 'I'm addicted to eating cat hair,' she admits in the new season of TLC's My Strange Addiction. Scroll down to watch video clip Fancy feast: Woman addicted to eating cat hair from the new season of TLC's My Strange Addiction This is one of many new and extremely odd obsessions from season 4 of the hit show, which premieres on February 13. Lisa prepares her wacky snack of choice by gathering cat fur from around the apartment, including off the floor and from the back of her sofa, but says 'the best ones are right off the cat.' Jason Barnum arrested: Terrifying criminal with a tattooed EYEBALL arrested for 'shooting at police officer' Published: 13:33 GMT, 15 September 2012 | Updated: 00:47 GMT, 21 September 2012 Shooting: Jason Barnum, pictured, was charged with shooting a police officer on Friday A heavily tattooed man who admitted robbing homes and stealing cars to fund his heroin habit has been charged with shooting at a police officer. 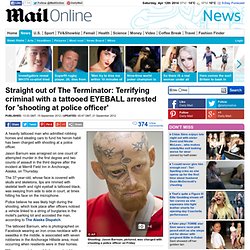 Jason Barnum was arraigned on one count of attempted murder in the first degree and two counts of assault in the third degree after the incident at Merrill Field Inn in Anchorage, Alaska, on Thursday. The 37-year-old, whose face is covered with skulls and skeletons, lips are rimmed with skeletal teeth and right eyeball is tattooed black, was swaying from side to side in court, at times hitting his face on the microphone. New York City police officer busted in 'failed plot to kidnap women, cook and eat them' held without bail. A New York police officer who allegedly plotted to kidnap up to 100 women before raping, killing, cooking and eating them has been charged. 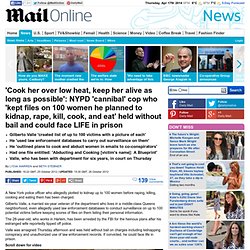 Gilberto Valle, a married six-year veteran of the department who lives in a middle-class Queens neighborhood, even allegedly used law enforcement databases to conduct surveillance on up to 100 potential victims before keeping scores of files on them listing their personal information. The 28-year-old, who works in Harlem, has been arrested by the FBI for the heinous plans after his estranged wife reportedly tipped off police. Valle was arraigned Thursday afternoon and was held without bail on charges including kidnapping conspiracy and unauthorized use of law enforcement records.

Are you taking the Mickey? Disney fanatic shares her bed with 400 cuddly toys... and her husband. Caroline Rayner, 27, started buying Disney toys when she was only threeMassive collection takes pride of place in her bedroom in Bromley, KentHusband David, 30, has to compete for bed space with the toys By Rob Preece Published: 11:55 GMT, 24 August 2012 | Updated: 18:43 GMT, 24 August 2012. Famous anorexic identical twins die in house fire following prophecy they would die together.

Clare and Rachel Wallmeyer, 42, died when fire swept through their home in Geelong, near MelbourneOne died in the flames while the other succumbed to severe burns on the way to hospitalInitial investigation suggests fire was not suspicious but twins had tried to kill one another before Pair were addicted to long distance running and fractured their feet endlessly attempting marathons Authorities considered locking sisters up to stop them starving themselves as each weighed little more than four stone Twins predicted they would 'die together' as they transformed into living skeletons By Richard Shears Published: 03:02 GMT, 28 August 2012 | Updated: 11:45 GMT, 28 August 2012 A pair of identical twins, who became famous through their desperate battle with anorexia, have died in a house fire.

Clare and Rachel Wallmeyer, 42, were killed after a fire broke out in their home in Geelong, near Melbourne, one perishing in the flames, the other succumbing to her severe burns on the way to hospital. 'I feel such a close bond to them': Mother-of-five amasses £12,000 collection of FIFTY fake babies because she can't have any more children. Alice Winstone has spent £12,000 in seven years buying enormous brood of fake childrenShe cannot have more children because of blood disorder which would make pregnancy unsafeLifelike dolls fill several rooms of her maisonette in Cardigan, Mid Wales - which she still shares with three of her five childrenMost expensive doll cost her £1,200Her obsession saw her husband move out because he 'couldn't cope' with number of dolls By Chris Parsons Published: 10:33 GMT, 24 August 2012 | Updated: 14:34 GMT, 24 August 2012 When mother-of-five Alice Winstone was told she could not have more children for health reasons, she remained determined to fill her home with babies.

And the maternal 39-year-old is so desperate to care for infants she has spent thousands buying 50 lifelike baby dolls which take up her entire house. Maternal instincts: Alice Winstone cares for one of the 50 fake babies which fill her home in Cardigan, Mid Wales 'I wouldn't have given up my dolls for Chris - we come as a package. Girl, 15, 'forced to live in chicken coop' by parents in Taylor County. By Rebecca Seales Published: 08:50 GMT, 31 May 2012 | Updated: 11:50 GMT, 31 May 2012 Police in Georgia are investigating claims that a 15-year-old girl was held captive in a chicken coop by her adoptive parents, and forced to perform manual labour. The unnamed teenager, from Taylor County, was taken from her home on Friday by officers from the Division of Family and Children Services. One neighbour told WTVM's News Leader 9 the girl had been made to live in a small red chicken pen at the back of the house, only to be moved to a workshop building 'when her behaviour improved'.

Cooped up: Investigators believe the girl's adoptive parents may have forced her to live in this hen house. Swedish professor 'cut off his wife's lips and ate them over affair' Octomom’s tragic new low. The boy who is eating his bedroom: Rare condition of Zach, 5, who can't tell the difference between food and inedible objects.

Youngster suffers from extreme form of a disorder called PicaEats blinds and plaster from walls as has a constant need to chewZach is also autistic and cannot speakMother Rachel plans to build 'safe room' without objects he can eat By Daniel Miller. At home with the buffaloes: The couple who live alongside TWO giant beasts with a combined weight of 3,300lbs. Trunk of burnin' love! Canadian woman is barking mad for oak tree she travels 7,000 miles a year to be alone with. Britain's most tattooed man Mathew Whelan has 3D branding on his face. Carer, 40, spends every day with £400 Adonis moulding she has dubbed 'Hans' Enjoys kissing and talking to the marble statueObsession known as objectum sexuality, shared by people in love with fences, the Eiffel Tower and a hydraulic flood barrier By Rachel Rickard Straus.