An Illustrated Guide to Space Maps 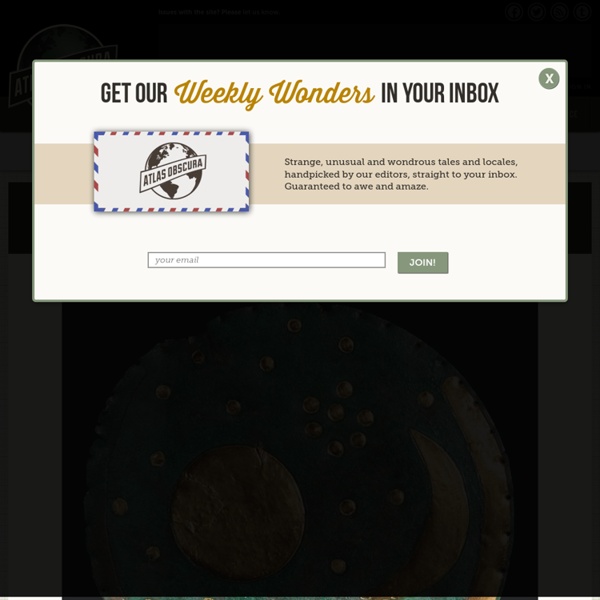 Nebra Sky Disc, Germany, 1600 BC. (Photo: Rainer Zenz/WikiCommons CC BY-SA 3.0) With its patinated bronze background and shiny gold sun, moon and stars, the 3600-year-old Nebra Sky Disc is worth gazing at for its beauty alone. For as long as humans have stared at the sky, we have sought to understand our place in the cosmos. The story behind the disc’s discovery is almost as crazy as the disc itself: it was dug up by metal-detector- wielding treasure hunters in 1999, along with “two swords, two axes, a chisel, and fragments of armlets.” Is it art or science? From the Harmonia Macrocosmica, Holland, 1660. Compiled by the Dutch astronomer and mathematician Andreas Cellarius towards the end of his life, the Harmonia Macrocosmica is a masterpiece of 17th century space mapping. From the Harmonia Macrocosmica, Holland, 1660. "Idea dell'Universo." Vincenzo Coronelli was a Franciscan monk who moonlit as a cartographer for the Republic of Venice. "Systema Solare et Planetarium." Related:  Strange maps - Cartographies et arts • Maps And Mapping

New London Model A 1:2000 scale interactive model of central London is now on display at The Building Centre as part of NLA’s new permanent exhibition. The model brings the story of London’s historical and physical development to life through a sophisticated projection system integrated with films. At 12.5 metres-long, the model covers more than 85 square kilometres of London, 19 Boroughs and approximately 170,000 buildings, including 34km of the Thames with its corresponding 21 bridges. It extends from King’s Cross in the north to Peckham in the south and the Royal Docks in the east to Old Oak Common in the west. Touchscreens allow buildings and major infrastructure projects to be brought to life across the surface of the model, showing the key areas of change and revealing the sheer scale of proposed development in the capital. The New London Model was built by Pipers with data supplied by Ordnance Survey using a combination of laser-cutting, 3-D printing and hand-crafting.

Anglo-Saxon London Map The full map in overview. A high-resolution version can be found by clicking below. Central London was once largely marshland. The first major Anglo Saxon settlement was Lundenwic (now Covent Garden/Aldwych). Later, King Alfred re-established a town within the old Roman walls, known as Lundenburh. South London, with some familiar place names. The Thames near Chiswick, which means ‘cheese farm’. North-west London, with the ‘nose-shaped hill’ (Neasdun), Wemba Lea and the curling River Brent, which still flows through the area. The eastern Thames, showing Charlton, Woolwich and Plumstead and, to the north, the important abbey town of Barking (Bercingum). Click here for the full-resolution Anglo-Saxon map (3.2 MB). Three years ago, we put together a map showing the London area in Anglo Saxon times (roughly speaking, 500-1066AD). We’ve now updated the map, based on feedback and further research. The map comes with a few caveats.

Impression de monde carte n 11 aquarelle par JessicaIllustration Wagner & Debes Cartographers English: The Leipzig Geographical Institute of Wagner & Debes was important German cartographic printer and publisher of cartographic work in the 19th- and early 20th century. Established in 1835 as a lithographic press by Eduard Wagner, who worked with cartography publisher Karl Baedeker. In 1872 Heinrich Wagner, son of Eduard Wagner, took over, moved the presses to Leipzig, and established his own publishing firm in collaboration with Ernst Debes. Subcategories This category has the following 2 subcategories, out of 2 total.

Concours Carto Actualité USGS Historical Topographic Maps Accessing historical topographic maps has never been easier TopoView highlights one of the USGS's most important and useful products, the topographic map. In 1879, the USGS began to map the Nation's topography. This mapping was done at different levels of detail, in order to support various land use and other purposes. As the years passed, the USGS produced new map versions of each area. The most current maps are available from The National Map. This interface was created by the National Geologic Map Database project (NGMDB), in support of topographic mapping program managed by the National Geospatial Program (NGP). Packed with new features and downloadable file formats The maps shown through topoView are from the USGS’s Historical Topographic Map Collection (HTMC). GeoTIFF – The GeoTIFF files are a compressed, 300 dpi TIFF image format, with embedded georeferencing information so that the map can be used directly in a Geographic Information System (GIS). Send us your feedback

map-of-the-internet-10-explore-this-beautiful-handdrawn-map-of-the-online-world-9098834 Vargic began the project in December 2013, using old National Geographic maps for visual inspiration and Alexa data of the most visited websites in the world to scale the different land masses. Perhaps the amazing fact is that the map was drawn free hand, directly into Photoshop. "My map is divided into two distinct parts,” Vargic explained to The Independent. “The eastern continent, the Old World, showcases software companies, gaming companies and some of the more real-life oriented websites." "The western part, the New World, is composed from two major continents; the northern one showcasing social networks, search websites, video websites, blogs, forums and art websites. Loading gallery In detail: Martin Vargic's astounding Map of the Internet 1 of 12 Vargic says he was inspired by an earlier map of the internet created by Randal Munroe, the programmer behind the well-known xkcd web-comic.

Inside The Most Amazing Map Library That You've Never Heard Of | Atlas Obscura The American Geographical Society Library at the University of Wisconsin, Milwaukee. (Photo: Luke Spencer.) Within the campus of University of Wisconsin-Milwaukee is a geographer’s treasure trove: over a million artifacts from the American Geographical Society, one of the most incredible collections of maps, atlases and globes to be found in America. But, ironically, the library is practically unexplored territory. When I asked for directions on campus many students themselves didn’t know it was there. It's an inconspicuous home for a storied collection: this is the final resting place of the library of the illustrious American Geographical Society. Faculty members of the geography department at UWM heard what was happening and applied. It took 16 trucks to move the vast collection, where it lives and is actively curated today in the Golda Meir Library. The 'rare room' of the Library containing some of its most valuable items. The oldest map in the collection dates from 1452. Dr.

'Mapping Brooklyn,' a Joint Exhibition of BRIC and the Brooklyn Historical Society, Explores the Complexities of the Borough Logan Square: the "Brooklyn" of Chicago. Oakland: the "Brooklyn" of San Francisco. NYC's 71-square-mile borough to the east has become such a strong cultural metaphor, so easily abstracted to explain other cities, that one can lose sight of the things that make it Brooklyn, not "Brooklyn." In "Mapping Brooklyn," a joint exhibition of BRIC House and the Brooklyn Historical Society, the manifold geographies of Brooklyn are on full display. "Through mapping, these artists have brought out a wide range of themes: the change and development and gentrification of Brooklyn, political issues, historical issues, issues of diversity," says Elizabeth Ferrer, vice president of contemporary art at BRIC and the exhibition's curator. Simonetta Moro's mixed-media on Mylar "Prospect Expressway" is a great example of that last theme. "There's some drawings where he maps the skyscrapers of the city, and in others he maps micro-sites, like the room of an AA meeting," says Ferrer.

Appalachian Mountain Club's Equipped: Nearly Every USGS Topo Map Ever Made. For Free. The U.S. Geological Survey (USGS) has been producing detailed topographic maps for more than 125 years. Today they are nearly all digitized and free to download through the USGS Map Store, an incredible treasure trove for both map junkies and casual hikers alike. To do so, find your desired location and select the type of map you wish to download (usually the 7.5-minute versions, which provide the most detail). Next mark a point within your desired map by first selecting the button next to "Mark Points" and then clicking anywhere within the area of interest. One important thing to note is that, in general, the most recent topo maps listed are markedly different from their predecessors. Lastly, and one of the single-most useful online tools I've discovered in recent years, is the ability to overlay every USGS topo map on top of Google Earth, another free (and extremely powerful) tool to add to your trip planning quiver. “Equipped” is an AMC Outdoors blog, written by Matt Heid.