Top 10 Most Overlooked Mysteries in History 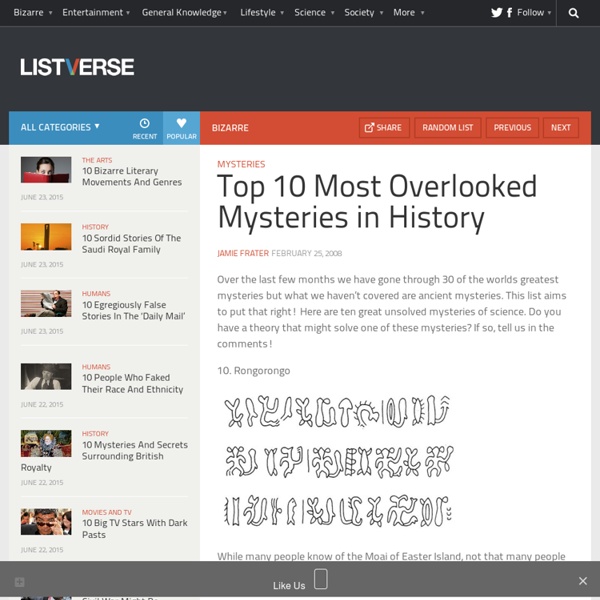 Mysteries Over the last few months we have gone through 30 of the worlds greatest mysteries but what we haven’t covered are ancient mysteries. This list aims to put that right! 10. While many people know of the Moai of Easter Island, not that many people know of the other mystery associated with Easter Island. 9. In the late 2nd century AD, the Greek writer Pausanias wrote an account of how (4-500 years earlier?) 8. This mystery may even be a problem for those legendary investigators from CSI and the like! 7. The Minoans are best known for the legend of Theseus and the Minotaur, but it is in fact the demise of this once-great civilisation that is more interesting. 6. Everyone has heard of Stonehenge, but few know the Carnac Stones. 5. The historical search for the legendary thief Robin Hood has turned up masses of possible names. 4. 3. The Voynich Manuscript is a medieval document written in an unknown script and in an unknown language. 2. 1. Jamie Frater

The 10 Most Puzzling Ancient Artifacts The Bible tells us that God created Adam and Eve just a few thousand years ago, by some fundamentalist interpretations. Science informs us that this is mere fiction and that man is a few million years old, and that civilization just tens of thousands of years old. Could it be, however, that conventional science is just as mistaken as the Bible stories? There is a great deal of archeological evidence that the history of life on earth might be far different than what current geological and anthropological texts tell us. Consider these astonishing finds: The Grooved Spheres Over the last few decades, miners in South Africa have been digging up mysterious metal spheres. The Dropa Stones In 1938, an archeological expedition led by Dr. The Ica StonesBeginning in the 1930s, the father of Dr. The Antikythera MechanismA perplexing artifact was recovered by sponge-divers from a shipwreck in 1900 off the coast of Antikythera, a small island that lies northwest of Crete. Ancient Model Aircraft

'Lost' Medieval City Discovered Beneath Cambodian Jungle A lost city known only from inscriptions that existed some 1,200 years ago near Angkor in what is now Cambodia has been uncovered using airborne laser scanning. The previously undocumented cityscape, called Mahendraparvata, is hidden beneath a dense forest on the holy mountain Phnom Kulen, which means "Mountain of the Lychees." The cityscape came into clear view, along with a vast expanse of ancient urban spaces that made up Greater Angkor, the large area where one of the largest religious monuments ever constructed — Angkor Wat, meaning "temple city" — was built between A.D. 1113 and 1150. Aerial view of Angkor Wat, showing the moat and causeway and the central tower surrounded by four smaller towersCredit: Alexey Stiop | Shutterstock.com Traces of temples In a series of archaeological mapping projects, scientists had previously used remote sensing to map subtle traces of Angkor. Lost medieval city Weird landscape

9 Extraordinary Human Abilities Humans This list of extraordinary human abilities was inspired The Top 10 Tips to Improve Your Memory when I began thinking about how some people are blessed (or cursed, depending on your point of view) with the ability to recall a scene as if they were looking at a photograph. And how other people can recreate music from memory, such as Mozart’s famed reproduction of Gregorio Allegri’s Miserere after one hearing. People who experience taste with greater intensity than the rest of the population are called supertasters. Scientists first noticed the differing abilities of people to taste a known compound when a DuPont chemist called Arthur Fox asked people to taste Phenylthiocarbamide (PTC). Supertasters will often dislike certain foods, particularly bitter ones, such as brussel sprouts, cabbage, coffee, and grapefruit juice. People with absolute pitch are capable of identifying and reproducing a tone without needing a known reference.

I have just been shot And now, friends, I want to take advantage of this incident to say a word of solemn warning to my fellow countrymen. First of all, I want to say this about myself: I have altogether too important things to think of to feel any concern over my own death; and now I cannot speak to you insincerely within five minutes of being shot. I am telling you the literal truth when I say that my concern is for many other things. It is not in the least for my own life. I am in this cause with my whole heart and soul. Friends, I ask you now this evening to accept what I am saying as absolutely true, when I tell you I am not thinking of my own success. I am going to ask you to be as quiet as possible for I am not able to give the challenge of the bull moose quite as loudly. Now, friends, I am not speaking for myself at all, I give you my word, I do not care a rap about being shot; not a rap. I have had a good many experiences in my time and this is one of them. Nobody was doing anything. Mr.

6 Insane Discoveries That Science Cant Explain We like to feel superior to the people who lived centuries ago, what with their shitty mud huts and curing colds by drilling a hole in their skulls. But we have to give them credit: They left behind some artifacts that have left the smartest of modern scientists scratching their heads. For instance, you have the following enigmas that we believe were created for no other purpose than to fuck with future generations. The Voynich Manuscript The Mystery: The Voynich manuscript is an ancient book that has thwarted all attempts at deciphering its contents. It appears to be a real language--just one that nobody has seen before. Translation: "...and when you get her to put the tennis racket in her mouth, have her stand in a fountain for a while. There is not even a consensus on who wrote it, or even when it was written. Why Can't They Solve It? Could you? Don't even try. As you can imagine, proposed solutions have been all over the board, from reasonable to completely clownshit. Our Guess:

Timeline Outline View : From Cave Paintings to the Internet 11 Things You May Not Know About Ancient Egypt — HISTORY Lists Ancient Egypt stood as one of the world’s most advanced civilizations for nearly 3,000 years and created a culture so rich that it has spawned its own field of study. But while Egyptian art, architecture and burial methods have become enduring objects of fascination, there is still a lot you probably don’t know about these famed builders of the pyramids. From the earliest recorded peace treaty to ancient board games, find out 11 surprising facts about the Gift of the Nile. Along with King Tut, perhaps no figure is more famously associated with ancient Egypt than Cleopatra VII. But while she was born in Alexandria, Cleopatra was actually part of a long line of Greek Macedonians originally descended from Ptolemy I, one of Alexander the Great’s most trusted lieutenants. For over two centuries the Egyptians fought against the Hittite Empire for control of lands in modern day Syria. After a long day’s work along the Nile River, Egyptians often relaxed by playing board games.

10 Fascinating Animals You Probably Haven’t Heard Of Animals Turns out the world isn’t all about lions, giraffes, dogs, and cats. Our planet contains many animals that are just now being discovered by scientists. Not only at the bottom of the ocean, either; a six-foot-long tree lizard and a new kind of African antelope have been among the discoveries so far this year. Here are ten animals—both recently discovered and otherwise—which you should know about: The Angora rabbit is the product of hundreds of years of domestic breeding; generation after generation of humans have bred it for its wool. There are actually multiple breeds of this rabbit , and they were very popular among French royalty. The dumbo octopus can be found at really, really deep parts of the ocean. The rather hideous blobfish isn’t a particularly fast swimmer. But how does it avoid being eaten? The kakapo is a New Zealand parrot, which owes its existence to the lack of native mammalian predators on the islands. That’s one remarkable creature.