The Question of Free Will 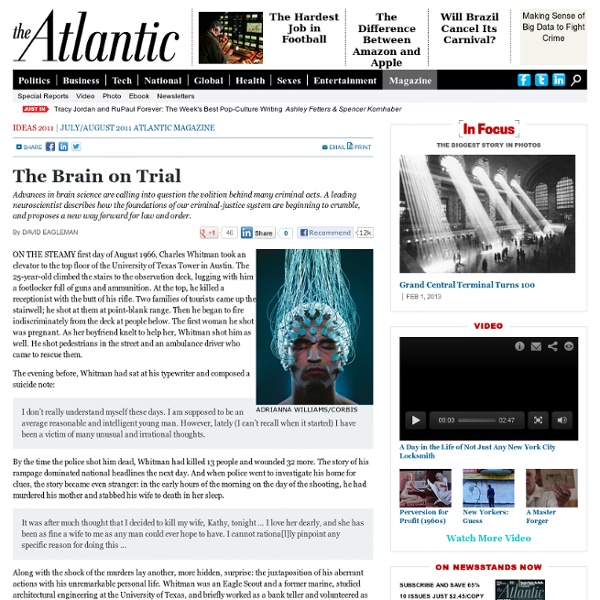 Advances in brain science are calling into question the volition behind many criminal acts. A leading neuroscientist describes how the foundations of our criminal-justice system are beginning to crumble, and proposes a new way forward for law and order. On the steamy first day of August 1966, Charles Whitman took an elevator to the top floor of the University of Texas Tower in Austin. The evening before, Whitman had sat at his typewriter and composed a suicide note: I don’t really understand myself these days. By the time the police shot him dead, Whitman had killed 13 people and wounded 32 more. It was after much thought that I decided to kill my wife, Kathy, tonight … I love her dearly, and she has been as fine a wife to me as any man could ever hope to have. Along with the shock of the murders lay another, more hidden, surprise: the juxtaposition of his aberrant actions with his unremarkable personal life. For that matter, so did Whitman.

List of paradoxes This is a list of paradoxes, grouped thematically. The grouping is approximate, as paradoxes may fit into more than one category. Because of varying definitions of the term paradox, some of the following are not considered to be paradoxes by everyone. This list collects only scenarios that have been called a paradox by at least one source and have their own article. Although considered paradoxes, some of these are based on fallacious reasoning, or incomplete/faulty analysis. Logic[edit] Self-reference[edit] These paradoxes have in common a contradiction arising from self-reference. Barber paradox: A barber (who is a man) shaves all and only those men who do not shave themselves. Vagueness[edit] Ship of Theseus (a.k.a. Mathematics[edit] Statistics[edit] Probability[edit] Infinity and infinitesimals[edit] Geometry and topology[edit] The Banach–Tarski paradox: A ball can be decomposed and reassembled into two balls the same size as the original.

THC Prevents MDMA Neurotoxicity in Mice. [PLoS One. 2010 Chapter 7: Neuroscience-Based Lie Detection: The Need for Regulation - American Academy of Arts & Sciences “I swear I didn’t do it.” “The check is in the mail.” “The article is almost done.” In our lives and in our legal system we often are vitally interested in whether someone is telling us the truth. Over the years, humans have used reputation, body language, oaths, and even torture as lie detectors. In the twentieth century, polygraphs and truth serum made bids for widespread use. The possibility of effective lie detection raises a host of legal and ethical questions. These issues are fascinating and the temptation is strong to pursue them, but we must not forget a crucial first question: does neuroscience-based lie detection work and, if so, how well? It is not. Arguably all lie detection, like all human cognitive behavior, has its roots in neuroscience, but the term neuroscience-based lie detection describes newer methods of lie detection that try to detect deception based on information about activity in a subject’s brain. First, almost none of the work has been replicated. The U.S.

More Than 1 Billion People Are Hungry in the World For many in the West, poverty is almost synonymous with hunger. Indeed, the announcement by the United Nations Food and Agriculture Organization in 2009 that more than 1 billion people are suffering from hunger grabbed headlines in a way that any number of World Bank estimates of how many poor people live on less than a dollar a day never did. But is it really true? Are there really more than a billion people going to bed hungry each night? Our research on this question has taken us to rural villages and teeming urban slums around the world, collecting data and speaking with poor people about what they eat and what else they buy, from Morocco to Kenya, Indonesia to India. But unfortunately, this is not always the world as the experts view it. Jeffrey Sachs, an advisor to the United Nations and director of Columbia University's Earth Institute, is one such expert. But then there are others, equally vocal, who believe that all of Sachs's answers are wrong. What is going on? Why?

Consciousness Search tips There are three kinds of search you can perform: All fields This mode searches for entries containing all the entered words in their title, author, date, comment field, or in any of many other fields showing on OPC pages. Surname This mode searches for entries containing the text string you entered in their author field. Advanced This mode differs from the all fields mode in two respects. Note that short and / or common words are ignored by the search engine. How the Brain Stops Time One of the strangest side-effects of intense fear is time dilation, the apparent slowing-down of time. It's a common trope in movies and TV shows, like the memorable scene from The Matrix in which time slows down so dramatically that bullets fired at the hero seem to move at a walking pace. In real life, our perceptions aren't keyed up quite that dramatically, but survivors of life-and-death situations often report that things seem to take longer to happen, objects fall more slowly, and they're capable of complex thoughts in what would normally be the blink of an eye. Now a research team from Israel reports that not only does time slow down, but that it slows down more for some than for others. An intriguing result, and one that raises a more fundamental question: how, exactly, does the brain carry out this remarkable feat? Researcher David Eagleman has tackled his very issue in a very clever way . Was it scary enough to generate a sense of time dilation?

What is Functional Magnetic Resonance Imaging (fMRI)? Functional magnetic resonance imaging, or fMRI, is a technique for measuring brain activity. It works by detecting the changes in blood oxygenation and flow that occur in response to neural activity – when a brain area is more active it consumes more oxygen and to meet this increased demand blood flow increases to the active area. fMRI can be used to produce activation maps showing which parts of the brain are involved in a particular mental process. The development of FMRI in the 1990s, generally credited to Seiji Ogawa and Ken Kwong, is the latest in long line of innovations, including positron emission tomography (PET) and near infrared spectroscopy (NIRS), which use blood flow and oxygen metabolism to infer brain activity. 1. The attractions of FMRI have made it a popular tool for imaging normal brain function – especially for psychologists. How Does an fMRI Work? The cylindrical tube of an MRI scanner houses a very powerful electro-magnet. What Does an fMRI Scan Look Like?

The Social Psychological Narrative—or—What Is Social Psychology, Anyway? There has been a question lurking in the back of my mind for all those years, which is how can we take this basic knowledge and use it to solve problems of today? I grew up in the turbulent 1960s, in an era where it seemed like the whole world was changing, and that we could have a hand in changing it. Part of my reason for studying psychology in the first place was because I felt that this was something that could help solve social problems. In graduate school and beyond I fell in love with basic research, which is still my first love. It is thrilling to investigate basic questions of self-knowledge and consciousness and unconsciousness. But those other, more applied questions have continued to rattle around and recently come to the fore, the more I realized how much social psychology has to offer. One of the basic assumptions of the field is that it's not the objective environment that influences people, but their constructs of the world. There are lots of other examples.

Animal Thought By Temple Grandin, Ph.D. Department of Animal Science Colorado State University Western Horseman, Nov. 1997, pp.140-145 (Updated January 2015) Temple Grandin is an assistant professor of animal science at Colorado State University. As a person with autism, it is easy for me to understand how animals think because my thinking processes are like an animal's. I have no language-based thoughts at all. Most people use a combination of both verbal and visual skills. A radio station person I talked to once said that she had no pictures at all in her mind. Associative Thinking A horse trainer once said to me, "Animals don't think, they just make associations." Animals also tend to make place-specific associations. Years ago a scientist named N. Fear Is the Main Emotion Fear is the main emotion in autism and it is also the main emotion in prey animals such as horses and cattle. Both animals and people with autism are also fearful of high-pitched noises. Fear-based behaviors are complex. References

Aymara people's "reversed" concept of time The Aymara, an indigenous group in the Andes highlands, have a concept of time that's opposite our own spatial metaphor. A new study by cognitive scientists explains how the Aymara consider the past to be ahead and the future behind them. According to the study, this is the first documented culture that seems not to have mapped time with the properties of space "as if (the future) were in front of ego and the past in back." From UCSD: The linguistic evidence seems, on the surface, clear: The Aymara language recruits “nayra,” the basic word for “eye,” “front” or “sight,” to mean “past” and recruits “qhipa,” the basic word for “back” or “behind,” to mean “future.” Link UPDATE: Thanks to all the readers who pointed out that a similar concept is presented in Robert Pirsig's book Zen and the Art of Motorcycle Maintenance.