The myth of the eight-hour sleep 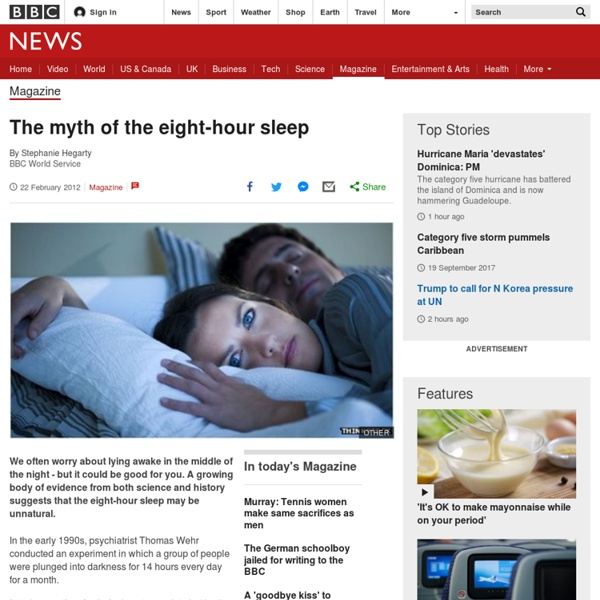 Image copyright Other We often worry about lying awake in the middle of the night - but it could be good for you. A growing body of evidence from both science and history suggests that the eight-hour sleep may be unnatural. In the early 1990s, psychiatrist Thomas Wehr conducted an experiment in which a group of people were plunged into darkness for 14 hours every day for a month. It took some time for their sleep to regulate but by the fourth week the subjects had settled into a very distinct sleeping pattern. They slept first for four hours, then woke for one or two hours before falling into a second four-hour sleep. Though sleep scientists were impressed by the study, among the general public the idea that we must sleep for eight consecutive hours persists. In 2001, historian Roger Ekirch of Virginia Tech published a seminal paper, drawn from 16 years of research, revealing a wealth of historical evidence that humans used to sleep in two distinct chunks. Image copyright bbc

A little known hack from Japan to get your notebook organized Tools like Evernote make organizing and finding information really simple. Yet despite that, I still often find myself using the humble notebook to jot down valuable ideas, especially when I’m on the go. However notebooks are hard to organize your ideas. Decoding the Science of Sleep Zlatko Glusica was the captain of an Air India Express plane carrying 166 passengers from Dubai to Mangalore, a bustling port city on India's southern coast. As his Boeing 737 approached the city, Mr. Glusica woke up from a nap in the cockpit and took over the controls. His co-pilot warned him repeatedly that he was coming in at the wrong angle and that he should pull up and try again.

15 Years of Cutting-Edge Thinking on Understanding the Mind by Maria Popova What mirror neurons have to do with Abu Ghraib, the science of religion, and how happiness flourishes. For the past 15 years, literary-agent-turned-crusader-of-human-progress John Brockman has been a remarkable curator of curiosity, long before either “curator” or “curiosity” was a frivolously tossed around buzzword. His Edge.org has become an epicenter of bleeding-edge insight across science, technology and beyond, hosting conversations with some of our era’s greatest thinkers (and, once a year, asking them some big questions.) Last month marked the release of The Mind, the first volume in The Best of Edge Series, presenting eighteen provocative, landmark pieces — essays, interviews, transcribed talks — from the Edge archive.

Nicola Tesla, Albert Einstein and Swami Vivekananda The Vedas are a collection of writings consisting of hymns, prayers, myths, historical accounting, dissertations on science, and the nature of reality, which date back at least 5,000 years. The nature of matter, antimatter, and the make up of atomic structure are described in the Vedas. The language of the Vedas is known as Sanskrit. The origin of Sanskrit is not fully understood. Western scholars suggest that it was brought into the Himalayas and thence south into India by the southward migrations of the Aryan culture. VIDEO: Meet Windsor's Millennials - Windsor Join the Conversation This is the first story in CBC Windsor's There's No Place Like Home series, an in-depth local look at the city's generation Y. Join the conversation on Twitter #cbcwdr or by logging onto cbc.ca/windsor and Facebook to discuss how Windsor can attract and retain the best and brightest Millennials.

Trick Your Brain for Happiness This month, we feature videos of a Greater Good presentation by Rick Hanson, the best-selling author and trailblazing psychologist. In this excerpt from his talk, Dr. Hanson explains how we can take advantage of the brain’s natural “plasticity”—it’s ability to change shape over time. gobyg There’s this great line by Ani Tenzin Palmo, an English woman who spent 12 years in a cave in Tibet: “We do not know what a thought is, yet we’re thinking them all the time.” It’s true.

View topic - Official Solicitor Yes John, I do realize that some kind of mental capacity act was around dating from the Tudor period. Going by earlier marriage laws in England, I believe that a husband and wife was treated as one person, in some earlier cases I believe that husband's had ownership of their wives. But the whole reason for me publishing our case is that a person was badly injured the legal and judicial system had let the patient down severely, like a bird falling from the sky and left to die. Even though the claimant had a spouse but he was prevented from taking part in her claim, because the legal and judicial system was collaborating together in preventing the spouse and family in having any say in the outcome of the claim.

Zorba the Greek Unmasked: Chorba the Macedonian, by Alex K. Gigeroff Originally published September, 1990 Printable Version To make a good soup you have to collect the ingredients and cook it very slowly. My Dedo Naumche was born in Macedonia way back about 1870. I never met him but I've heard lots about him. Tech conversion: India's richest shrine goes green 31 January 2012Last updated at 00:09 By Shilpa Kannan BBC News, Tirumala Green temple: India's Tirupati Temple has adopted a range of green technologies - and the shrine is now trading carbon credits 7 Strategies to Stop Procrastinating Thanks to e-mail, Twitter, Tumblr, YouTube, Facebook, and countless other modern-day distractions, it’s easier than ever to find excuses to not be getting work done. But procrastination leads to guilt, stress, and feelings of being overwhelmed, along with the inevitable shoddy performance on the job. Why do people procrastinate?

British have invaded nine out of ten countries - so look out Luxembourg The analysis is contained in a new book, All the Countries We've Ever Invaded: And the Few We Never Got Round To. Stuart Laycock, the author, has worked his way around the globe, through each country alphabetically, researching its history to establish whether, at any point, they have experienced an incursion by Britain. Only a comparatively small proportion of the total in Mr Laycock's list of invaded states actually formed an official part of the empire. The remainder have been included because the British were found to have achieved some sort of military presence in the territory – however transitory – either through force, the threat of force, negotiation or payment. It's the Economy, Dummkopf! And it troubled her. For a start she refused to believe there was such a thing as a German national character. “No one in my field believes this anymore,” she says. “How do you generalize about 80 million people? You can say they are all the same, but why would they be this way?