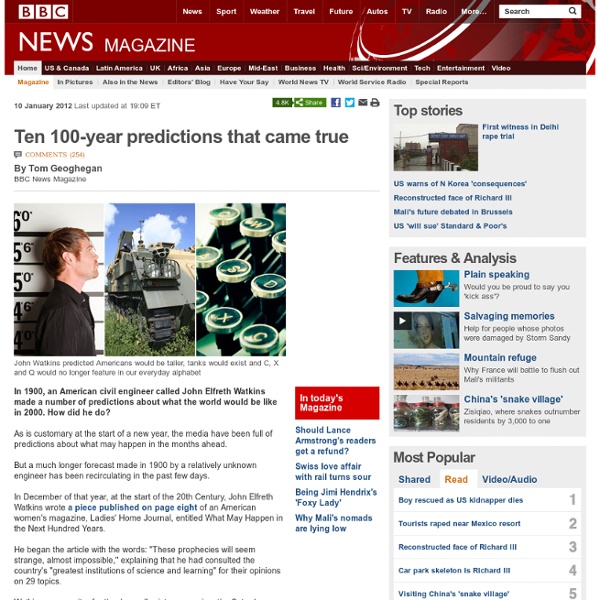 11 January 2012Last updated at 00:09 By Tom Geoghegan BBC News Magazine John Watkins predicted Americans would be taller, tanks would exist and C, X and Q would no longer feature in our everyday alphabet In 1900, an American civil engineer called John Elfreth Watkins made a number of predictions about what the world would be like in 2000. How did he do? As is customary at the start of a new year, the media have been full of predictions about what may happen in the months ahead. But a much longer forecast made in 1900 by a relatively unknown engineer has been recirculating in the past few days. In December of that year, at the start of the 20th Century, John Elfreth Watkins wrote a piece published on page eight of an American women's magazine, Ladies' Home Journal, entitled What May Happen in the Next Hundred Years. Watkins was a writer for the Journal's sister magazine, the Saturday Evening Post, based in Indianapolis. It was picked up and caused some excitement on Twitter. 1. 2. 3. 4. 5. 6.

Is radix sort faster than quicksort for integer arrays? discussion at reddit There are plenty of misconceptions and confusion over radix sort on the internet. The wikipedia article is messy and unclear, and focuses more on trying to explain the philosophy (for lack of a better word) than the characteristics and capabilities of radix sort. American Flag Sort Worst case performance: O(kN) Worst case space complexity: O(k log N) In Engineering radix sort McIlroy et al. discusses how radix sort can be used successfully to sort arrays of strings, using the American Flag Sort variant. The algorithm can be adapted into a high performance sort algorithm for integers, as shown by Birkeland in Searching large data volumes with MISD processing. Implementation The implementation proved to be surprisingly simple. “The troubles with radix sort are inimplementation, not in conception” - McIlroy et al. (1993) The complexity is O(kN) with k = 4 for 32-bit integers. Benchmark sort Hardware: Language options: C++: -O3 radix.cc -o radix Java: -Xmx10G Arrays.sort

Real Farmville: iPad Game Would Let Pigs Play with Humans | Science News Nothing good gets away Steinbeck replied the same day. His beautiful letter of advice can be enjoyed below. (Source: Steinbeck: A Life in Letters; Image: Thom and John Steinbeck with their father in 1954, courtesy of UC Berkeley.) New York November 10, 1958Dear Thom:We had your letter this morning. algorithm - In-Place Radix Sort Synthetic biology and the rise of the 'spider-goats' | Science News Cops release 3 boys questioned in Logan Square sex assault Three teenaged boys being questioned for the New Year's Eve attack on an 18-year-old Highland Park woman came to the Logan Square neighborhood to attend a concert were released without charges late Sunday, the Tribune has learned. The young woman was sexually assaulted and beaten into a coma after she came to the city to attend a Saturday night performance at the Congress Theatre by Rusko, an English producer of electronic dance music and DJ whose real name is Christopher Mercer. But rather than going into the show the woman went into a restaurant on Milwaukee Avenue, across the street from the theater, the source said. While inside the restaurant, she met three people with whom she left, the source said. She was found a short time later on a nearby lawn, apparently beaten unconscious during a sexual assault, police said. The three juvenile males were released from police custody at about 10 p.m. The three, described as being in their mid-teens, were taken into custody.

'Spooky action at distance' in particle physics? | Science News Google+ Is Way Bigger Than We Thought: It's Totally Going To Change How The Web Works LAPD Drops Google Apps Plan Computerworld - After more than two years of work, the city of Los Angeles last month abandoned plans to migrate its police operations to Google's hosted email and office applications because it says the service can't meet FBI security requirements. The city council last month voted to amend a 2009 contract calling for Computer Sciences Corp. (CSC) to undertake a wholesale replacement of the city's GroupWise email system with Google's email and collaboration services. The amended pact cuts the Los Angeles Police Department and its nearly 13,000 employees out of the project; other agencies will continue the migration to Google Apps for Government. The vote came last month after the city's chief legislative analyst, Gerry Miller, and its chief administrative officer, Miguel Santana, determined that the Google service could not be brought into compliance with the FBI's Criminal Justice Information Systems (CJIS).

IBM scientists create the smallest 3D map of planet Earth | Science News The Sexperts' Lounge » Myths and Misconceptions around Female Lubrication By Maxxters Female lubrication may sound like a simple bodily function, but the process is actually incredibly complex. So much so that it still isn’t fully understood. Wetness is naturally produced in a vagina and is actually always present. Lubricant is mostly made up of blood plasma (which is mainly water, along with other trace chemicals). Generally speaking, lubrication is a clear fluid, but many of its characteristics (like taste and colour) vary depending on where a woman is in her cycle. A noticeable change in your (or your partner’s) usual smell, lasting more than a few days, may be a sign of infection, so consider seeing a physician. Vaginas get wet so that sex will not be painful. Many women have difficulty getting wet even when they fantasize and add physical stimulation. As women age, their vaginal walls become thinner and need more lubricant to avoid soreness from sexual activity – and at the same time, as women age, they produce less lubrication.

Buzzblog: Who's flying drones in U.S.? ... EFF sues government to find out Most of us think of drones in the military context - they're being used over there to watch and kill enemy combatants - and, collaterally, innocent civilians. Your opinion of their use likely dovetails with your opinion of the wars. But for years now they have come to be used more and more by governmental and private entities here on our home turf - not the weaponry, at least not yet - but as a surveillance tool seen as holding both great promise and the potential for great abuse. (2012's 25 Geekiest 25th Anniversaries) From the EFF press release: Drones are designed to carry surveillance equipment - including video cameras, infrared cameras and heat sensors, and radar - that can allow for sophisticated and almost constant surveillance. Such requests are generally expected to be dealt with within 20 days; this one has gone unfulfilled for nine months. You can read the EFF's filing with the United States District Court for the Northern District of California here (.pdf).