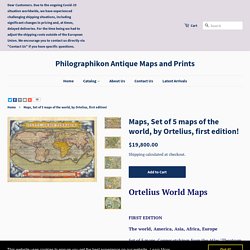 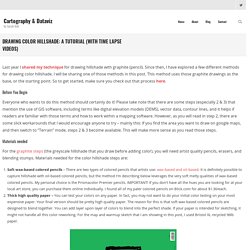 Since then, I have explored a few different methods for drawing color hillshade. I will be sharing one of those methods in this post. Fictions cartographiques au temps du corona - Julien Dupont. Capucine Gros Exhibits ‘Implicit Borders: A Cartography of Free Will’ – WWD. “I’ve always been quite obsessed with maps,” says artist Capucine Gros on a sunny afternoon from Catinca Tabacaru Gallery in the Lower East Side of Manhattan, where she was putting the finishing touches on her solo show “Implicit Borders: A Cartography of Free Will.” 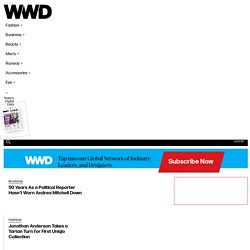 Gros grew up between Switzerland, France and China before landing in New York, where she currently resides. “Traveling always feels like putting pieces of a puzzle together and also just the concept of nationality itself,” she continues, speaking with a hard-to-place accent. “Not really knowing where you’re from exactly, and wondering, well, why are we so constrained by these lines?

They are necessary, but how much importance do we let them have in our lives? '” She explores the concept of borders — emotional and physical — through much of her work. Discover Fascinating Vintage Maps From National Geographic's Archives. Cartography has been close to National Geographic’s heart from the beginning. 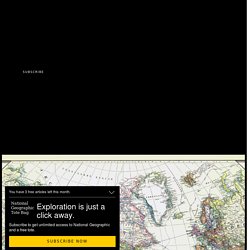 And over the magazine’s 130-year history, maps have been an integral part of its mission. Now, for the first time, National Geographic has compiled a digital archive of its entire editorial cartography collection — every map ever published in the magazine since the first issue in October 1888. The collection is brimming with more than 6,000 maps (and counting), and you’ll have a chance to see some of the highlights as the magazine’s cartographers explore the trove and share one of their favorite maps each day. Follow @NatGeoMaps on Twitter, Instagram, and Facebook to see what they discover. (The separate map archive is not available to the public, but subscribers can see them in their respective issues in the digital magazine archive.) Jo Mora's Maps Brought California History to Life. RADICI STUDIOS...ce n'est pas de la carto...mais c'est si beau! L'Instruction en France en 1867 / par J. Manier, ... Japan Map Drawing 2019. 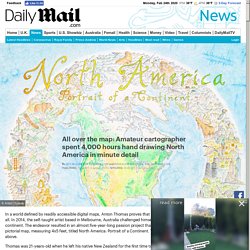 In 2014, the self-taught artist based in Melbourne, Australia challenged himself to hand draw the entire North American continent. The endeavor resulted in an almost five-year-long passion project that culminated in a resplendently animated pictorial map, measuring 4x5 feet, titled North America: Portrait of a Continent. The cartouche, or emblem of the map is pictured above. Mapping a Nation: Japan’s Most Famous Cartographer, Inō Tadataka. Inō Tadataka was 55 years old when he set out to methodically survey the entire coastline of Japan, a task he would spend the next 17 years of his life completing. 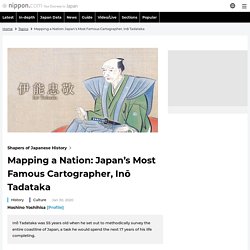 A Monumental Undertaking During the latter part of the Edo period (1603–1868), geographical surveyor Inō Tadataka (1745–1818) set to work charting the coastline of Japan, a mammoth undertaking that consumed the last decades of his life. Inō would die at the age of 73, before seeing his life’s work completed in the form of a map of the nation based on his survey activities. But he is recognized as the first person to survey the entirety of Japan using modern scientific techniques. His collection of highly accurate maps served as the basis of the mapmaking efforts of the modern Meiji government. 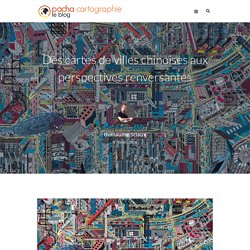 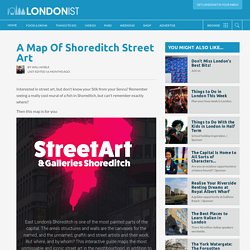 Remember seeing a really cool mural of a fish in Shoreditch, but can't remember exactly where? Then this map is for you: Compiled by The Stage, the interactive map pinpoints the locations of street art around the east London locale that's slathered in the stuff. Atlasobscura. “Other maps are such shapes, with their islands and capes! 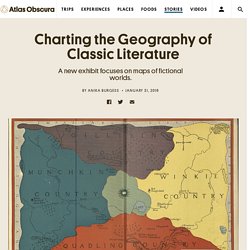 But we’ve got our brave Captain to thank:”(So the crew would protest) “that he’s bought us the best - A perfect and absolute blank!” Not all literary maps are as charmingly obtuse. Spain’s Royal cartographer, Tomás López, designed a gloriously detailed copperplate map of Don Quixote and Sancho Panza’s travels. Madeleine de Scudéry’s 17th-century novel Clélie includes the famous Carte de Tendre, an allegorical map showing the path to love (beware the Lake of Indifference!). 17th-century adult colouring-in book ready for modern hues. Adults finding time for colouring-in books might seem a modern fad, part of the fashion for all things mindful. 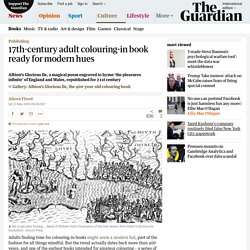 But the trend actually dates back more than 400 years, and one of the earliest books intended for amateur colouring – a series of maps adorned with delicately drawn images of nymphs, water sprites and fairies – is about to be republished, centuries after it was first printed. The maps in Albion’s Glorious Ile, out in June from Unicorn Press, were commissioned to illustrate the poet Michael Drayton’s 17th-century, 15,000-line poem, Poly-Olbion. Describing England and Wales – Drayton didn’t get round to Scotland – the vast poem tours the country, county by county, evoking the topographical features and legends of each location. “Of Albions glorious Ile the wonders … I write, / The sundry varying soyles, the pleasures infinite,” writes Drayton, in the poem he dubbed his “strange Herculean labour” and spent 30 years honing. Jeux cartistiques - Agnès Stienne. European Bus Maps : the State of the Art – Jug Cerovic.

The notion that Europe has superb public transit does not always extend to the quality of public transit maps. I have studied more than 250 European cities and their bus maps, and have also designed a few. Here are some observations about the state of the practice. All transit maps fall within two main categories: geographic maps that show the real scale and distances, and schematic maps that help you see the network structure.

Atlasobscura. To hear Admiral Bartholomew de Fonte tell it, his voyage was full of serendipity and promise. In a 1708 edition of the English periodical The Monthly Miscellany or Memoirs for the Curious, de Fonte recounted a journey, some five decades prior, “to find out if there was any North West Passage from the Atlantick Ocean into the South and Tartarian Sea.” He had shoved off from Lima, he wrote, and navigated to the present-day Pacific Northwest, where he entered an intricate system of watery arteries that beckoned him inland. He chronicled one fortuitous scene after another. 11590. Rotating Planets — Visionscarto. Maps are art in a thought-provoking New York exhibition.

Vintage maps, books and more in UW Libraries Special Collections exhibit ‘All Over the Map’ "Cartografías de lo desconocido": Usted está aquí. King Arthur's Avalon, Sandy Island, and Other Imaginary Islands On Maps. By Simon Worrall In the age of GPS and Google Maps, it is hard to believe that maps can include places that don’t exist. But author Malachy Tallack argues that maps are as much “a cartography of the mind” as they are a way to figure out where we are. In his new book, The Un-Discovered Islands, Tallack takes readers on a journey to imaginary places—mythic islands, mapmakers’ mistakes, mirages, and outright hoaxes. [Find out how explorer Robert Peary discovered a continent that wasn’t there.]

Her work was featured in the 2015 Venice Biennale, in the exhibition All the World’s Futures in the Arsenale, with an installation of 40 map-based drawings relating to the ongoing crisis in Syria. The works’ richly detailed surfaces, with jewel-like tones rendered in ink and paint stick on translucent vellum, belie their somber thematic content charting the country’s ever expanding cycles of violence and refugee displacement. Chung’s work studies the geographical shifts in countries that were traumatized by war, human destruction, or natural disaster. Artist Michelle Chandra Turns City Street Maps into Mazes.

How Trompe-L’Oeil Added Information and Ornamentation to Maps. Cartographers have often added ornamental flourishes to their maps, whether sea monsters in the Medieval and Renaissance eras that attempted to describe ocean life, or octopuses in more modern maps that suggested a spreading evil. In the 18th century, philosophers were considering the connection between sight and touch, an idea that made its way into the world of mapmaking. Look But Don’t Touch: Tactile Illusions on Maps from the Harvard Map Collection explores this emergence of illusions on cartography.

Look But Don’t Touch involves both an extensive online exhibition, and a display at the Map Collection in Harvard University’s Pusey Library. David Weimer, librarian for cartographic collections and learning at the Map Collection, told Hyperallergic that the exhibition was inspired in part by his research on embossed atlases for the blind, which got him thinking about how cartographers expressed space as something visual.

A Wonderfully Stereotypical 1970s Map of New York. Jc fichet sur Twitter : "Deep dream maps show #cartography at its most beautiful MT via @CartogRRaphy... LEGO micro World Map - If you ♥ LEGO, come have a look at LEGO LOVE board - I am the French-Israeli d… The Witcher - Interactive Animated Map. This beautiful map shows what Canada's future looked like in 1955. MI LABORATORIO DE IDEAS: australia: the world's centre.