What ever happened to Rob Bell, the pastor who questioned the gates of hell? Show caption Pastor Rob Bell from “The Rob Bell Show.” 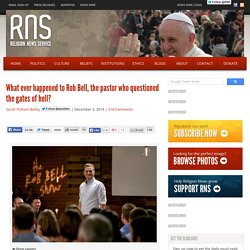 Photo courtesy of Harpo Studios Inc. This image is available for web and print publication. Bizarre Medical Mystery: 12-Year-Old Boy Has No Desire to Eat or Drink. Landon Jones, now age 12, before and after his weight loss, due to a total lack of desire to eat or drink. 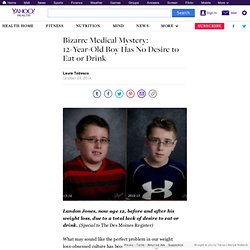 (Special to The Des Moines Register) What may sound like the perfect problem in our weight loss-obsessed culture has become a medical nightmare for a 12-year-old boy, Landon Jones, of Cedar Falls, Iowa. On Oct. 14, 2013, the middle-schooler lost his desire to eat or drink. His perplexing condition, which hasn’t compromised his sense of taste or smell, was accompanied by dizziness and a build-up of phlegm, which he continually coughed up in his chest. More than a year later, Landon’s appetite has yet to return, and doctors are still trying to pinpoint exactly what prompted his mysterious malady. Dr. Although Landon’s condition has gone unexplained, his parents do have a theory: The 12-year-old’s hypothalamus — a region of the brain that regulates hunger and thirst, among other things — may not be functioning properly.

Related: Cell Transplant Helps Paralyzed Man Walk With Frame. 10 Horrifying Premature Burials. Creepy Being buried prematurely is one of the most terrifying of all fears. 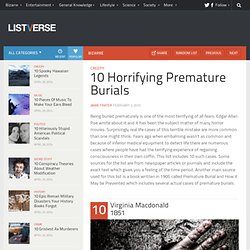 Edgar Allan Poe wrote about it and it has been the subject matter of many horror movies. Surprisingly real life cases of this terrible mistake are more common than one might think. Years ago when embalming wasn’t as common and because of inferior medical equipment to detect life there are numerous cases where people have had the terrifying experience of regaining consciousness in their own coffin.

This list includes 10 such cases. Virginia Macdonald Virginia Macdonald lived with her father in New York City and became ill, died, and was buried in Greenwood Cemetery, Brooklyn. The Brain on Trial - David Eagleman. Advances in brain science are calling into question the volition behind many criminal acts. 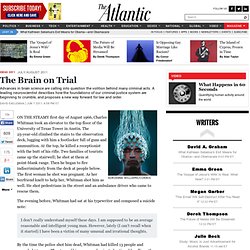 A leading neuroscientist describes how the foundations of our criminal-justice system are beginning to crumble, and proposes a new way forward for law and order. On the steamy first day of August 1966, Charles Whitman took an elevator to the top floor of the University of Texas Tower in Austin. The 25-year-old climbed the stairs to the observation deck, lugging with him a footlocker full of guns and ammunition. Fate of Ark of the Covenant Revealed in Hebrew Text. A newly translated Hebrew text claims to reveal where treasures from King Solomon's temple were hidden and discusses the fate of the Ark of the Covenant itself. 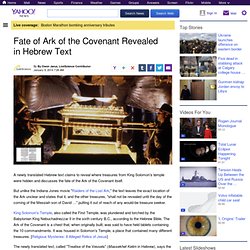 But unlike the Indiana Jones movie "Raiders of the Lost Ark," the text leaves the exact location of the Ark unclear and states that it, and the other treasures, "shall not be revealed until the day of the coming of the Messiah son of David …" putting it out of reach of any would-be treasure seeker. King Solomon's Temple, also called the First Temple, was plundered and torched by the Babylonian King Nebuchadnezzar II in the sixth century B.C., according to the Hebrew Bible. Tim Minchin - If I Didn't Have You - Full Uncut Version. Do Rich People Live Longer? Those looking for a magic elixir to keep them healthy and happy need look no further than their bank account. 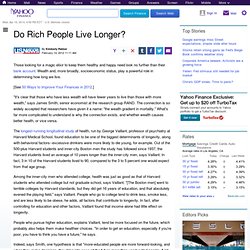 Wealth and, more broadly, socioeconomic status, play a powerful role in determining how long we live. [See 50 Ways to Improve Your Finances in 2012.] "It's clear that those who have less wealth will have fewer years to live than those with more wealth," says James Smith, senior economist at the research group RAND. The connection is so widely accepted that researchers have given it a name: "the wealth gradient in mortality. " What's far more complicated to understand is why the connection exists, and whether wealth causes better health, or vice versa. The longest-running longitudinal study of health, run by George Vaillant, professor of psychiatry at Harvard Medical School, found education to be one of the biggest determinants of longevity, along with behavioral factors--excessive drinkers were more likely to die young, for example. 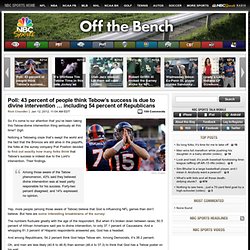 Sigh. Noticing a Tebowing craze that’s swept the world and the fact that the Broncos are still alive in the playoffs, the folks at the survey company Poll Position decided to find out exactly how many folks think that Tebow’s success is indeed due to the Lord’s intervention. Their findings. Among those aware of the Tebow phenomenon, 43% said they believed divine intervention was at least partly responsible for his success. Forty-two percent disagreed, and 14% expressed no opinion. Yep, more people (among those aware of Tebow) believe that God is influencing NFL games than don’t believe. The numbers fluctuate greatly with the age of the respondent. And among Republicans, 54.2 percent think God helps Tebow win. Oh, and men are less likely (40.6 to 46.8) than women (46.4 to 37.3) to think that God has a Tebow poster on his wall.