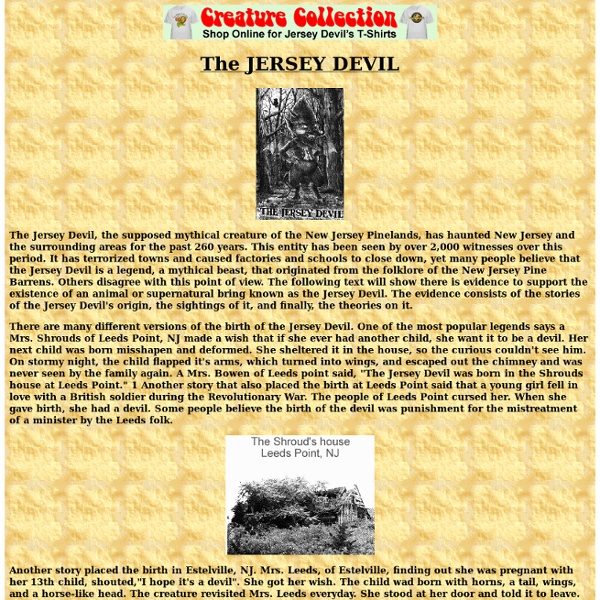 The Jersey Devil, the supposed mythical creature of the New Jersey Pinelands, has haunted New Jersey and the surrounding areas for the past 260 years. This entity has been seen by over 2,000 witnesses over this period. It has terrorized towns and caused factories and schools to close down, yet many people believe that the Jersey Devil is a legend, a mythical beast, that originated from the folklore of the New Jersey Pine Barrens. Others disagree with this point of view. There are many different versions of the birth of the Jersey Devil. Another story placed the birth in Estelville, NJ. Burlington, NJ, also claims to be the birthplace of the Jersey Devil. There are many other versions of the legend. The first thing that ties the legends together is the name "Leeds". The origins provide some validity to the existence of the Jersey Devil, but the sightings are the most substantial pieces of evidence. From the pre 1909 era, few documented records of sightings still exist. on them. Jack E. Related:  laracristinawelter2 • strange things

The Mystery Casebook - Cryptids, Bigfoot, Loch Ness Monster, Chupacabra, Sea Monsters, Aliens, UFO News, Mysterious Places, Photos, Video Nessie on the Net! The Ultimate Loch Ness Monster Live Cam, Scotland Tesla The history of technology is populated with a marvellous cast of characters. On the one hand you have the colourful, hard-working inventors like Thomas Edison who slaved away morning, noon and night to produce many of the wonders that we take for granted such as the incandescent light, the telephone, and the garlic peeler. On the other you have the moonbat crazies who show up at the patent office with a cardboard box stuffed with wires and a torch battery claiming that they've made contact with John Kerry's charisma. Born in Smiljan, Croatia, Tesla was educated at Graz and Prague, worked for the Continental Edison Company in Paris, and emigrated to the United States in 1884. Composite photo of Tesla making it appear as if he's sitting serenely in a barrage of lightning. So far so good; sounds like the biography of many a successful Victorian electrical engineer.

Lair of Ancient 'Kraken' Sea Monster Possibly Discovered | Ancient Sea Monsters & Ichthyosaurs | Mythological Beasts | Deadly Sea Creatures This article was updated on Oct. 11 at 10:42 a.m. ET A giant sea monster, the likes of the mythological kraken, may have swum Earth's ancient oceans, snagging what was thought to be the sea's top predators — school bus-size ichthyosaurs with fearsome teeth. The kraken, which would've been nearly 100 feet (30 meters) long, or twice the size of the colossal squid, Mesonychoteuthis, likely drowned or broke the necks of the ichthyosaurs before dragging the corpses to its lair, akin to an octopus's midden, according to study researcher Mark McMenamin, a paleontologist at Mount Holyoke College in Massachusetts. "It is known that the modern octopus will pile the remains of its prey in a midden and play with and manipulate those pieces," McMenamin said during a telephone interview. Storrs added, "On top of this, the specimens are not well preserved in their current setting, thus the arrangement, 'etching' and bone breakage may have alternate explanations. Cause of death The perfect crime?

Science Confirms Third Eye Chakra « Merovee Better late than never, chaps ! Approximately, two and a half thousand years after the chakras were discussed in the Upanishads, modern science appears to confirm the existence of the Third Eye Chakra , even though the scientists probably have no knowledge of the chakra system . From the Mail Online : Researchers found that the area of the brain used to ‘mentalise’ – the technical term for imagining what’s inside somebody else’s head – is far larger in people with a lot of friends.The forebrain region – found just above the eyes – is one of the most highly evolved areas of the human brain. It is known to be crucial to social skills and the ability to ‘mentalise’, or guess what other people are thinking. It is not the only ‘weird’ research which shows a form of telepathy exists . The scientists put electrodes inside the skulls of brain surgery patients to monitor information from their temporal lobe, which is involved in the processing of speech and images . One question occurs to me .

Bigfoot Field Researchers Organization Ghosts and Ghost Stories Yeti 'Nests' Found in Russia? | Yeti, Bigfoot Evidence | Weird News Bigfoot researcher and biologist John Bindernagel claims his research group has found evidence that the Yeti (a Russian "cousin" of the American Bigfoot) not only exists, but builds nests and shelters by twisting tree branches together. "We didn't feel like the trees we saw in Siberia had been done by a man or another mammal.... Twisted trees like this have also been observed in North America and they could fit with the theory that Bigfoot makes nests. The nests we have looked at are built around trees twisted together into an arch shape," Bindernagel told the British tabloid The Sun. Bindernagel was part of a small group of scientists who visited western Siberia to examine evidence of the Yeti in October. That group made headlines around the world for issuing a statement that they had "indisputable proof" of the Yeti and were 95 percent sure it existed based on the evidence – a few strands of hair – they found. Unless the marks were made by human hoaxers.

Best UFOs Aliens Videos Research !!! Monstrous.com The Shadowlands: Ghosts and Hauntings Visit Dave's bio page / Tina's bio page Online 24/7 and also at 16 Church St, Mt Holly, NJ Dave's Internet Radio Show and Podcast textorizer Textorizer allows you to make pictures formed with text. It is best described by the sample images below. Although there are many versions around, the only one that is continuing to supported is this one. The previous version of Textorizer came as a downloadable application. Right now, textorizer/excoffizer works in Firefox, Chrome and Opera. Some browsers will however struggle with larger output images. Choose a mode examples Here are a few pictures produced with textorizer/excoffizer (click to see the text) There is even a Textorized Group on Flickr, with many more examples. Documentation Click on textorizer, textorizer2 or excoffizer Select a picture on your computer Play with the controls or enter new text, and press preview Source & Licensing The source can be browsed on github. Textorizer and excoffizer are © Max Froumentin 2008-2011. All Rights Reserved. Support Please email max @ froumentin . net for help. Acknowledgements

Aliens UFOs Photos Pictures Proof The Ultimate Directory Of Free Image Sources So, you need an image for your blog? We’ve spent some time categorizing our favorite sources for free images and organizing them in such a way as to help you find what you’re looking for. Here are the criteria we’ve examined: Subjects: Does a site focus on specific genres of images, or is it a mass collection of various image types? High Resolution: Lots of great image resources emerged in the pre-Web 2.0 phase, but it wasn’t until bandwidth dramatically increased that allowed for the uploading of much higher resolution images suitable for editing and printing. License: The licenses vary extremely from source to source. Safety: Government sites and many specific subject collections are extremely safe for students to use. Search Engines While these websites do not actually contribute image content themselves, they’re able to index images in a way that makes it easier to search for free content. Category Favorite: Bing Images Bing Images Compfight Creative Commons Search Everystockphoto HiveStock