THE WENDIGO OF THE NORTH WOODS 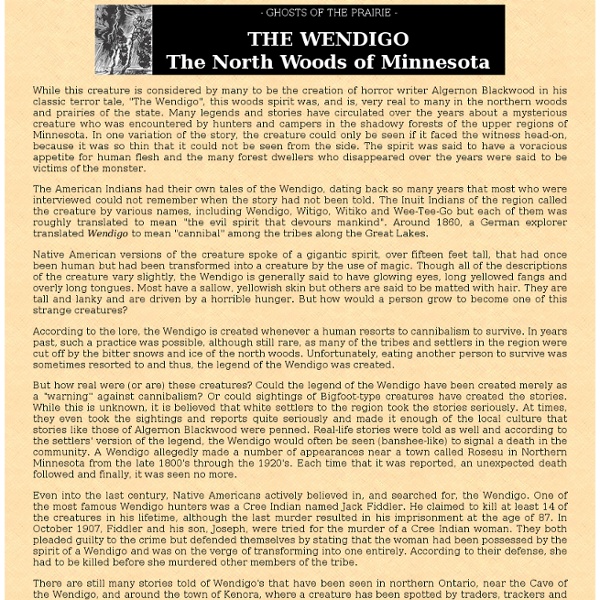 The Mystery Casebook - Cryptids, Bigfoot, Loch Ness Monster, Chupacabra, Sea Monsters, Aliens, UFO News, Mysterious Places, Photos, Video Nessie on the Net! The Ultimate Loch Ness Monster Live Cam, Scotland Cryptozoology Online: Centre for Fortean Zoology (CFZ) - the world's best cryptozoology organisation - main page Bigfoot Field Researchers Organization 6 Real Islands Way More Terrifying Than The One On 'Lost' Summer's right around the corner, and it's time to pick your next vacation spot. Now, we know the problem you're facing: You want a nice island paradise, but you also want to experience horrors beyond comprehension, and maybe you even want to die on your trip. Well, we've got some great islands for you... Ilha de Queimada Grande; A.K.A. Over at Forests.org, there's an article that opens with a description of, "A deserted island where the forest floor writhes with the world's most venomous vipers. And no, Forests.org is not a site for terrifying Indiana Jones / Anaconda slash-fiction. Now you may be asking, "But Cracked, there are poisonous snakes in loads of countries. Remember how we mentioned the snakes only live on this one island? Not pictured: The dead people just out of shot. Now imagine five of those. Let's back up and talk about that fisherman: "I heard the story of the fisherman who went ashore to pick bananas, got bitten and somehow managed to struggle back to his boat. Yeah.

Welcome to Strangeusa.com! Lair of Ancient 'Kraken' Sea Monster Possibly Discovered | Ancient Sea Monsters & Ichthyosaurs | Mythological Beasts | Deadly Sea Creatures This article was updated on Oct. 11 at 10:42 a.m. ET A giant sea monster, the likes of the mythological kraken, may have swum Earth's ancient oceans, snagging what was thought to be the sea's top predators — school bus-size ichthyosaurs with fearsome teeth. The kraken, which would've been nearly 100 feet (30 meters) long, or twice the size of the colossal squid, Mesonychoteuthis, likely drowned or broke the necks of the ichthyosaurs before dragging the corpses to its lair, akin to an octopus's midden, according to study researcher Mark McMenamin, a paleontologist at Mount Holyoke College in Massachusetts. [Rumor or Reality: The Creatures of Cryptozoology] "It is known that the modern octopus will pile the remains of its prey in a midden and play with and manipulate those pieces," McMenamin said during a telephone interview. McMenamin presented his work Monday (Oct. 10) at the annual meeting of the Geological Society of America in Minneapolis. Cause of death The perfect crime? McMenamin said.

Paranormal, UFOs, Cryptids and Unexplained Phenomena This is a follow up to the Possible Bigfoot Detected - Yadkin River, Davie County, NC post from Thursday, July 28th. I received two emails, one on Friday and the other this morning, that referenced 'something' stalking the same general area. Both witnesses requested to remain anonymous at this time: Concerning the 'Bigfoot on the Yadkin River in Davie County'. When I first started hearing the howls it happened on a regular basis from about 10:00P.M. to 1:00A.M. or 2:00 A.M. Please do not reveal my name or contact info if you publish this letter. I read your piece about an unknown animal or possible Bigfoot in Davie County. I have heard stories of sightings but people around here kind of keep these things quiet. I have received several inquiries from investigators since I posted the original email. I had also posted the following that referenced a supposed juvenile Bigfoot photographed in Arkansas: Hello Lon, my name is Louisa Clingan and my cam captured that pic back in Oct of 09.