10 Of The Strangest Unclaimed Airline Baggage Items Ever Found 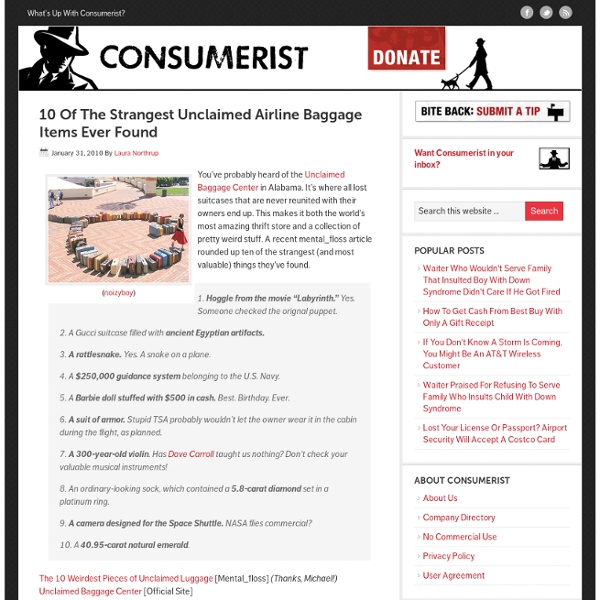 - StumbleUpon 1994's MOST BIZARRE SUICIDE At the 1994 annual awards dinner given by the American Association for Forensic Science, AAFS President Don Harper Mills astounded his audience in San Diego with the legal complications of a bizarre death. Here is the story. "On 23 March 1994, the medical examiner viewed the body of Ronald Opus and concluded that he died from a shotgun wound of the head. The decedent had jumped from the top of a ten- story building intending to commit suicide (he left a note indicating his despondency). five_horrifying_serial_killers_youve_probably_never_heard_of - FEARnet - StumbleUpon Serial killers are the real-life monsters that we disguise as horror movie villains. Bundy, Dahmer, and Manson are names that are as recognizable as Freddy, Jason, and Michael. They are horrifyingly fascinating because, in the movies, motives aren't questioned; it's just a fun, scary time, and the threat ends when the lights come on. But in real life, it is unfathomable that people could be so monstrous. We've gathered five of the sickest, most horrifying serial killers that you should be aware of - but probably aren't.

6 Insane Discoveries That Science Cant Explain We like to feel superior to the people who lived centuries ago, what with their shitty mud huts and curing colds by drilling a hole in their skulls. But we have to give them credit: They left behind some artifacts that have left the smartest of modern scientists scratching their heads. For instance, you have the following enigmas that we believe were created for no other purpose than to fuck with future generations. The Voynich Manuscript The Mystery:

The Best of Kravin Glass Pipes Kravin Glass, located in Colorado, creates some of the most unique and intricate glass pipes on the market. The examples we’ve featured below are some of their finest, but you can find several more examples on their homepage, including videos of their creation. Unique glass pipes with evolving shapes and styles. Image credits: Kravin Glass Quit Complaining About Your Job ThreatTrack was established in 1994 as Sunbelt Software Inc. to provide best-of-breed security solutions to the rapidly growing Windows user base. For the next decade, the company created a broad array of security solutions for consumers, businesses and large enterprises, including its popular CounterSpy anti-spyware software, iHateSpam email security product and the CWSandbox (now ThreatAnalyzer) automated malware analysis sandbox. In 2008, the company launched its VIPRE antivirus product line. VIPRE combined anti-malware and anti-spyware into a single, small-footprint antivirus solution designed to provide comprehensive malware protection to users without slowing down their PCs or networks. Sunbelt Software was acquired by GFI Software Inc., in 2010, becoming the GFI Software Security Business Unit. GFI Software announced plans to spin off its Security Business Unit in 2013, when ThreatTrack began operations as an independent company.