Sleep 'cleans' the brain of toxins 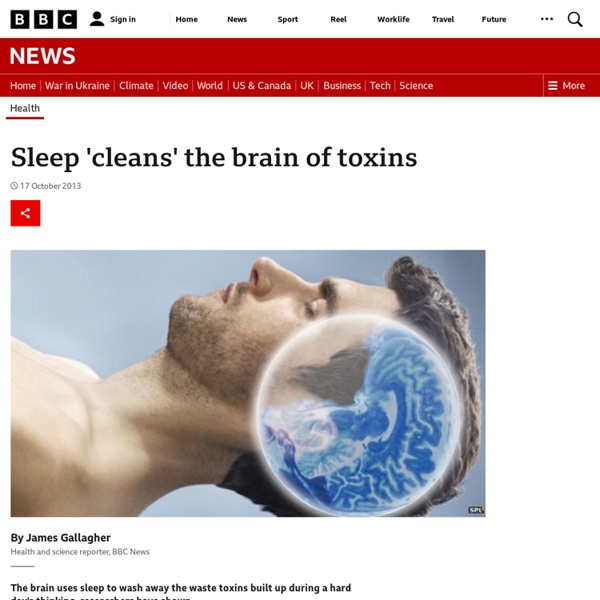 The brain uses sleep to wash away the waste toxins built up during a hard day's thinking, researchers have shown. The US team believe the "waste removal system" is one of the fundamental reasons for sleep. Their study, in the journal Science, showed brain cells shrink during sleep to open up the gaps between neurons and allow fluid to wash the brain clean. They also suggest that failing to clear away some toxic proteins may play a role in brain disorders. One big question for sleep researchers is why do animals sleep at all when it leaves them vulnerable to predators? It has been shown to have a big role in the fixing of memories in the brain and learning, but a team at the University of Rochester Medical Centre believe that "housework" may be one of the primary reasons for sleep. "The brain only has limited energy at its disposal and it appears that it must choose between two different functional states - awake and aware or asleep and cleaning up," said researcher Dr Maiken Nedergaard.

Understanding Sleep: Deep Sleep, REM Sleep, Cycles, Stages, and The power of sleep Many of us try to sleep as little as possible. There are so many things that seem more interesting or important than getting a few more hours of sleep, but just as exercise and nutrition are essential for optimal health and happiness, so is sleep. The quality of your sleep directly affects the quality of your waking life, including your mental sharpness, productivity, emotional balance, creativity, physical vitality, and even your weight. No other activity delivers so many benefits with so little effort! Understanding sleep Sleep isn’t exactly a time when your body and brain shut off. The good news is that you don't have to choose between health and productivity. Myths and Facts about Sleep Myth 1: Getting just one hour less sleep per night won’t affect your daytime functioning. Myth 2: Your body adjusts quickly to different sleep schedules. Myth 3: Extra sleep at night can cure you of problems with excessive daytime fatigue. How many hours of sleep do you need? REM sleep

Sleep Studies: Tests & Results According to the National Institutes of Health, 50 to 70 million Americans are affected by chronic sleep disorders and intermittent sleep problems that can significantly diminish health, alertness and safety. Untreated sleep disorders have been linked to hypertension, heart disease, stroke, depression, diabetes and other chronic diseases. Sleep problems can take many forms and can involve too little sleep, too much sleep or inadequate quality of sleep. The Institute of Medicine recently estimated in its report, Sleep Disorders and Sleep Deprivation: An Unmet Public Health Problem , that “hundreds of billions of dollars a year are spent on direct medical costs related to sleep disorders such as doctor visits, hospital services, prescriptions, and over-the-counter medications.” Sleep problems and lack of sleep can affect everything from personal and work productivity to behavioral and relationship problems. Sleep problems can have serious consequences. Should Your Sleep Be Evaluated?

Sleep may help us to forget by rebalancing brain synapses | Science We spend one third of our lives sleeping, but we still do not know exactly why we sleep. Recent research shows that that the brain does its housekeeping while we sleep, and clears away its waste. According to another hypothesis, sleep plays the vital role of restoring the right balance of brain synapses to enhance learning, and two studies published in today’s issue of Science now provide the most direct evidence yet for this idea. We do know that sleep is important for consolidating newly formed memories. Giulio Tononi argues that the synaptic strengthening that accompanies learning increases the brain’s energy consumption, and may overload its capacity for processing information. Tononi and his long-term collaborator Chiara Cirelli have already shown that even short periods of sleep or wakefulness alter synaptic activity at multiple levels, and make synapses shrink or grow, respectively. They also created genetically engineered mice lacking the Homer1a gene. References

Kriya for Conquering Sleep 1. Sit on the heels with the palms on the thighs. Keep the spine straight and lean back 30 degrees from the vertical position. Hold the posture with long deep breathing for 1 minute. Then relax. 2. 3. 4. 5. 6. 7. 8. 9. 10. 11. 12. 13. Comments: If sleep is a constant problem for you, practice this kriya regularly for 90 days. © The Teachings of Yogi Bhajan This Kriya can be found in the Sadhana Manual available from KRI. Note: Always seek the advice of a trained health professional before beginning any exercise program.

Lack of sleep linked to Alzheimer's disease Published 21 October 2013 09:14 PM The findings follow earlier research indicating that one of the functions of sleep is to purge the brain of toxic proteins. One such harmful protein is beta-amyloid (Abeta), which accumulates in the brains of people with Alzheimer's. The new study appears to reinforce the importance of sleep in staving off dementia. US scientists who looked at data on 70 adults with an average age of 76 found that those who slept less, and who experienced low quality sleep, had higher levels of beta-amyloid. Self-reported sleep duration in the participants ranged from five to seven hours a night. The authors, led by Dr Adam Spira, from the Johns Hopkins Bloomberg School of Public Health in Baltimore, wrote in the journal JAMA Neurology: "In summary, our findings in a sample of community-dwelling older adults indicate that reports of shorter sleep duration and poorer sleep quality are associated with a greater Î'beta burden.

Sleeping beauty | HertfordshireMercury | Beauty Banish eye bags and tired skin with a restful night. Lisa Haynes reveals how to reap the benefits of beauty sleep With the clocks going back to signal winter’s imminent arrival, we’re entering a new phase of sleep. Darker mornings are creeping in, making groggy wake-up calls the norm until spring. “Sleep is affected by melatonin levels, which in turn is affected by light and darkness, so the seasonal change causes all sorts of disruption to the body,” explains Dick Middleton, technical director for Schwabe herbal remedies. But if you can get your optimum amount of sleep, you’ll set yourself up for a recharged and revived new dawn. With the restorative beauty sleep fairies getting to work overnight, there’s more to pillow time than meets the eye. If you’re a sleep under-achiever, stress and anxiety are often to blame when it comes to disturbed nights. “Sleep is not a passive process - you need to respect it and learn how to do it as a skill,” says sleep expert Kathleen McGrath.

Lack of sleep could lead to heart disease and type 2 diabetes Failing to get enough sleep doesn’t only make you feel sluggish and unfocused — it can be bad for your health. Scientists have told us that getting insufficient sleep can increase our risk of diseases like type 2 diabetes and cardiovascular disease. But a recent study takes prior research linking sleep deprivation and increased disease risk further, asking how lack of sleep impacts our health. The study from researchers with the University of Helsinki, was published in PLOS One and looked at what kind of biological mechanisms were linked to sleep deprivation and how these changes can affect the immune system. This research is important as its estimated as many as one-third of US adults don’t get the recommended seven to nine hours of sleep per night. In the sleep lab of the Finnish Institute of Occupational Health, researchers deprived study participants of sleep limiting them to only four hours per night for five consecutive days, mimicking what might happen during a typical workweek.

Polyphasic Sleep Schedules And Benefits A normal person spends about a third of their lives sleeping, according to the National Institute of Health. Based on the average U.S. life expectancy of 78.21 years, that means you spend about 26 years of your life in bed. We know we need sleep to retain memories and allow our muscles and organs to rest and recover. Most people follow a monophasic sleep schedule, which involves seven to eight hours of continuous sleep every night. Others, notably college students and the residents of many Latin American countries, follow a biphasic sleep schedule, involving five to six hours of sleep plus a 30- to 90-minute nap. Throughout history, however, a bold few have attempted one of several outlandish polyphasic sleep schedules, bringing down sleep time to as little as two hours a day. Before we get into the types of polyphasic sleep schedules and the people who've tried them, Matt Bianchi, director of the sleep division at Massachusetts General Hospital, offers a warning: "Everyone is different.