What Science Is Telling Us About The Heart’s Intuitive Intelligence 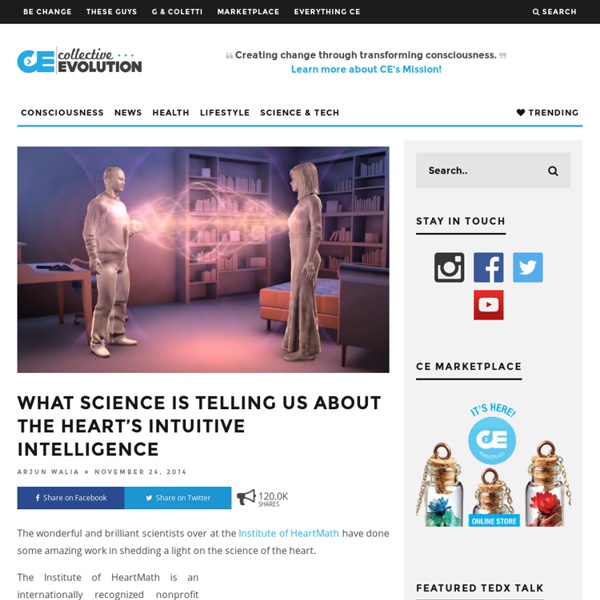 The wonderful and brilliant scientists over at the Institute of HeartMath have done some amazing work in shedding a light on the science of the heart. The Institute of HeartMath is an internationally recognized nonprofit research and education organization dedicated to helping people reduce stress, self-regulate emotions, and build energy and resilience for healthy, happy lives. HeartMath tools, technology, and training teach people to rely on the intelligence of their hearts in concert with that of their minds at home, school, work, and play. A large portion of their research has investigated heart and brain interaction. Researchers have examined how the heart and brain communicate with each other and how that affects our consciousness and the way in which we perceive our world. For example, when a person is feeling really positive emotions like gratitude, love, or appreciation, the heart beats out a certain message. Get Your Free Numerology Reading

Related:  Medicine in Strange places • Positivity • Things I have yet to read or want to save • underdown1

10 Superfoods Healthier Than Kale  In the world of marketing, image is everything. If you're James Franco or Roger Federer or Taylor Swift, your name and face can be used to sell anything from phones to watches to perfume -- even if you're not necessarily famous for the your tech-savvy, your promptness, or the way you smell. In the food world, the biggest celebrity of all might be kale -- the Shakira of salads, the Lady Gaga of leafy greens. It's universally recognized that kale anything--kale chips, kale pesto, kale face cream -- instantly imparts a health halo. Even 7-Eleven is making over its image by offering kale cold-pressed juices. 8 Behaviors That Block Positive Energy (And How to Avoid Them) “I do believe we’re all connected. I do believe in positive energy. I do believe in the power of prayer. I do believe in putting good out into the world. And I believe in taking care of each other.” – Harvey Feirstein, award-winning actor and playwright The unpredictability of life often results in volatile emotions.

helicopter_parenting_is_increasingly_correlated_with_college_age_depression Photo by Wavebreakmedia Ltd/Thinkstock Academically overbearing parents are doing great harm. So says Bill Deresiewicz in his groundbreaking 2014 manifesto Excellent Sheep: The Miseducation of the American Elite and the Way to a Meaningful Life. “[For students] haunted their whole lives by a fear of failure—often, in the first instance, by their parents’ fear of failure,” writes Deresiewicz, “the cost of falling short, even temporarily, becomes not merely practical, but existential.” Those whom Deresiewicz calls “excellent sheep” I call the “existentially impotent.” From 2006 to 2008, I served on Stanford University’s mental health task force, which examined the problem of student depression and proposed ways to teach faculty, staff, and students to better understand, notice, and respond to mental health issues.

AWCAOnline Chi-sau - AWCAOnline Wing Tsun's Sticking-hands Training Introduction Chi-sau, or Sticking-hands, is a training method unique to the Wing Tsun system in how it approaches the concept of. A variety of arts utilize the method after seeing what it can accomplish, yet none outside of the system have captured its essence quite like Wing Tsun. But what is Chi-sau? Chi-sau is a method of training the arms for sensitivity. Homemade Miracle Drink: It Turns Gray Hair Back to Its Natural Color First of all, if you ask someone who has been using this remedy, they will tell you that it will surely improve your sight. You will also notice great skin improvement. But this remedy’s most amazing effect is that it can color white hairs and make your hair thicker than before. Ingredients needed:

The power of positivity: How banishing negative thoughts helped me beat pancreatic cancer, twice Pancreatic cancer is one of the most lethal human diseases known to man. Each year, more than 40,000 Americans are diagnosed with pancreatic cancer, and 95 percent die within the next 12 months. Steve Jobs, Patrick Swayze, opera singer Luciano Pavarotti: These celebrities all died from pancreatic cancer. Because survival rates are low, and treatment options are limited and usually ineffective, pancreatic cancer can be deadly to the body and spirit, and considered tantamount to a death sentence. But that doesn’t have to be the case: I survived the most lethal type of this disease— not once, but twice. Persevering through that second bout— a spread of this cancer to my liver after a long period of remission— is virtually miraculous and defies clear explanation.

Reddit Users Choose the Most-Addicting, “Lesser-Known” Apps. Here are some of my Faves. Those that know me from my CrackBerry days can attest that I’m an app addict – just a bit, mind you. One of the many benefits of my BlackBerry 10 smartphone is its selection of mobile applications, especially today, with the hundreds of thousands of Android apps via the Amazon Appstore (and other sources), BlackBerry World, and even the near-native Web apps for BlackBerry 10’s ultra-fast browser. I can barely keep my addiction – I mean, passion – in check. True app addicts don’t just swear by the popular apps, they also pledge allegiance to less-well-known apps. Last month, Reddit members chimed in on the “lesser known apps [they] can’t live without”.

Professionals learn positivity is the key to success Ambitious professionals and business owners from Dundee, Montrose and Perth, came together this week to hear about the power positivity holds for achieving success in business, as part of Clydesdale Bank’s Private Week. The event, named Positive Leadership, was held at the Inchture Hotel in Perthshire on Tuesday 24 March and attracted more than 45 guests. Attendees consisted of a mix of private banking customers and non-customers, including solicitors, surveyors and accountants and business entrepreneurs. The session aimed to encourage influential people in business to embrace positivity as a style of leadership. Director of consultancy group Positive Leadership Limited, Graham Watson, presented to the guests. His career spans 30 years during which he has consulted for business, education and sport organizations across the globe.

The Likely Cause of Addiction Has Been Discovered – It's Not What You Think Johann Hari’s New York Times Bestselling book Chasing The Scream: The First and Last Days of the War on Drugs is Johann Hari’s book is the perfect antidote to the war on drugs. It is now one hundred years since drugs were first banned in the United States. On the eve of this centenary, journalist Johann Hari set off on an epic three-year, thirty-thousand-mile journey into the war on drugs. What he found is that more and more people all over the world have begun to recognize three startling truths: Drugs are not what we think they are. Addiction is not what we think it is. And the drug war has very different motives to the ones we have seen on our TV screens for so long.

What Students Remember Most About Teachers Dear Young Teacher Down the Hall, I saw you as you rushed past me in the lunch room. Urgent. In a hurry to catch a bite before the final bell would ring calling all the students back inside. I noticed that your eyes showed tension. There were faint creases in your forehead.