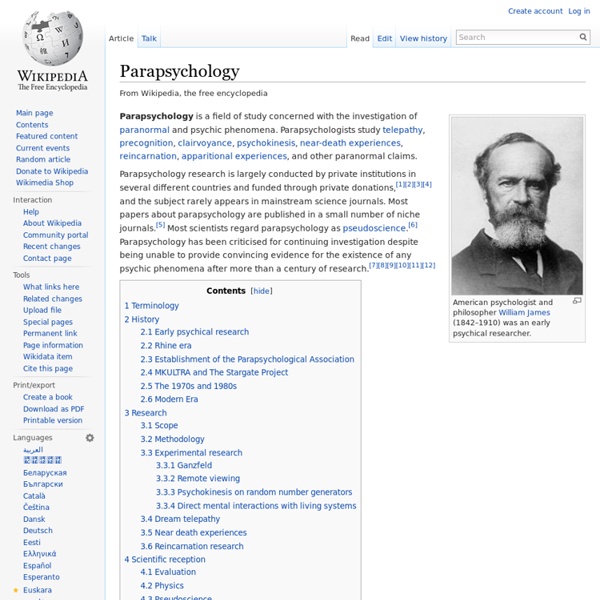 American psychologist and philosopher William James (1842–1910) was an early psychical researcher. Parapsychology is a field of study concerned with the investigation of paranormal and psychic phenomena. Parapsychologists study telepathy, precognition, clairvoyance, psychokinesis, near-death experiences, reincarnation, apparitional experiences, and other paranormal claims. Parapsychology research is largely conducted by private institutions in several different countries and funded through private donations,[1][2][3][4] and the subject rarely appears in mainstream science journals. Terminology[edit] Para is from Greek, and means "beside, closely related to, beyond..." The Parapsychological Association divides psi into two main categories: psi-gamma for extrasensory perception and psi-kappa for psychokinesis.[17] In popular culture, "psi" has become more and more synonymous with special psychic, mental, and "psionic" abilities and powers. History[edit] Early psychical research[edit]

Clairvoyance Character reader and Clairvoyant in a traveling show, UK The term clairvoyance (from French clair meaning "clear" and voyance meaning "vision") is used to refer to the ability to gain information about an object, person, location or physical event through means other than the known human senses,[1][2] i.e., a form of extra-sensory perception. A person said to have the ability of clairvoyance is referred to as a clairvoyant ("one who sees clearly"). Claims for the existence of paranormal and psychic abilities such as clairvoyance have not been supported by scientific evidence published in high impact factor peer reviewed journals.[3] Parapsychology explores this possibility, but the existence of the paranormal is not accepted by the scientific community.[4] Parapsychology, including the study of clairvoyance, is an example of pseudoscience.[5][6][7][8] Usage[edit] Status of clairvoyance[edit] Clairvoyance and related phenomena throughout history[edit] Some parapsychologists[who?]

Game theory Game theory is the study of strategic decision making. Specifically, it is "the study of mathematical models of conflict and cooperation between intelligent rational decision-makers."[1] An alternative term suggested "as a more descriptive name for the discipline" is interactive decision theory.[2] Game theory is mainly used in economics, political science, and psychology, as well as logic, computer science, and biology. The subject first addressed zero-sum games, such that one person's gains exactly equal net losses of the other participant or participants. Today, however, game theory applies to a wide range of behavioral relations, and has developed into an umbrella term for the logical side of decision science, including both humans and non-humans (e.g. computers, animals). Modern game theory began with the idea regarding the existence of mixed-strategy equilibria in two-person zero-sum games and its proof by John von Neumann. Representation of games[edit] Extensive form[edit] [edit]

How to Heal Cavities Naturally The world is slowly waking up to the fact that, when you give the body what it needs, it can heal things we previously thought were impossible. A fine example of what is often deemed as an incurable health problem is dental cavities, but extensive research is now becoming more public about the true nature of tooth decay and the fact that there are proven remedies that can remedy it. Photo by Kacsó Sándor The lies perpetrated about tooth decay. According to the American Dental Association, the reason we have tooth decay is as follows: “[Tooth decay] occurs when foods containing carbohydrates (sugars and starches) such as milk, pop, raisins, cakes or candy are frequently left on the teeth. There are a few problems with this theory, including: What actually causes tooth decay Tooth decay, as researched by Dr. The food remedies that can heal cavities and tooth decay Foods to focus on are: Supplements to consider are:

Scientists Claim That Quantum Theory Proves Consciousness Moves To Another Universe At Death Learning Mind| A book titled “Biocentrism: How Life and Consciousness Are the Keys to Understanding the Nature of the Universe“ has stirred up the Internet, because it contained a notion that life does not end when the body dies, and it can last forever. The author of this publication, scientist Dr. Robert Lanza who was voted the 3rd most important scientist alive by the NY Times, has no doubts that this is possible. Beyond time and space Lanza is an expert in regenerative medicine and scientific director of Advanced Cell Technology Company. But not so long ago, the scientist became involved with physics, quantum mechanics and astrophysics. Lanza points to the structure of the universe itself, and that the laws, forces, and constants of the universe appear to be fine-tuned for life, implying intelligence existed prior to matter. The theory implies that death of consciousness simply does not exist. Lanza also believes that multiple universes can exist simultaneously. Multiple worlds