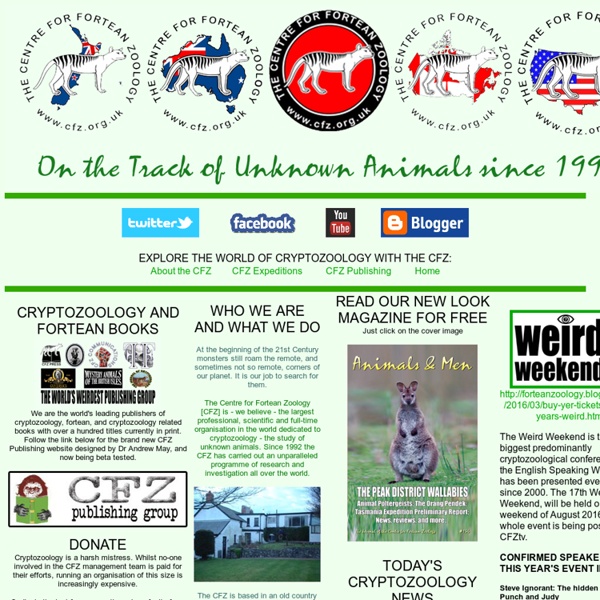 The Mystery Casebook - Cryptids, Bigfoot, Loch Ness Monster, Chupacabra, Sea Monsters, Aliens, UFO News, Mysterious Places, Photos, Video Bigfoot Field Researchers Organization Tatzelwurm In Alpine folklore, the Tatzelwurm is a stubby, lizard-like creature. It takes the appearance of a cat with the hind-end of a serpent with no hind legs. Narratives about the creature can be found in several areas of Europe, including the Austrian, Bavarian, Italian and Swiss Alps. It has several regional names including Stollenwurm, Springwurm, Arassas, Bergstutzen, and Praatzelwurm. References[edit] See also[edit] Lindworm

6 Real Islands Way More Terrifying Than The One On 'Lost' Summer's right around the corner, and it's time to pick your next vacation spot. Now, we know the problem you're facing: You want a nice island paradise, but you also want to experience horrors beyond comprehension, and maybe you even want to die on your trip. Well, we've got some great islands for you... Ilha de Queimada Grande; A.K.A. Snake Island Over at Forests.org, there's an article that opens with a description of, "A deserted island where the forest floor writhes with the world's most venomous vipers. And no, Forests.org is not a site for terrifying Indiana Jones / Anaconda slash-fiction. Now you may be asking, "But Cracked, there are poisonous snakes in loads of countries. Remember how we mentioned the snakes only live on this one island? Not pictured: The dead people just out of shot. Now imagine five of those. Let's back up and talk about that fisherman: And the lighthouse keeper's family? Yeah. Think of the scariest premise you can for a horror movie. The year is 1945.

Pennsylvania Bigfoot Society, Welcome to Strangeusa.com! NESRA - North East Sasquatch Researchers Association NESRA is an association of independent Bigfoot researchers and affiliated organizations who share strategies, theories, experiences and resources in a network, in hopes of discovering solid, scientific proof for the existence of the creatures known as Bigfoot or Sasquatch. While we encourage independent thought among our members, we want to stress that as a group, we do not subscribe to the idea that Bigfoot is anything other than a "flesh-and-blood", corporeal animal. Bigfoot or Sasquatch-type creatures may be rare, elusive and unusual, but they are in no way supernatural. At NESRA, we strive to provide a definitive source of information on all things Bigfoot. We will supply you with the latest news involving the ongoing search for these creatures as well as with some of the oldest and newest stories about these creatures plus eyewitness sightings and encounters. Your questions, comments, suggestions and ideas are welcome and will serve to further the effectiveness of NESRA.

Paranormal, UFOs, Cryptids and Unexplained Phenomena This is a follow up to the Possible Bigfoot Detected - Yadkin River, Davie County, NC post from Thursday, July 28th. I received two emails, one on Friday and the other this morning, that referenced 'something' stalking the same general area. Both witnesses requested to remain anonymous at this time: Concerning the 'Bigfoot on the Yadkin River in Davie County'. I live several miles up river from where this event took place. When I first started hearing the howls it happened on a regular basis from about 10:00P.M. to 1:00A.M. or 2:00 A.M. Please do not reveal my name or contact info if you publish this letter. I read your piece about an unknown animal or possible Bigfoot in Davie County. I have heard stories of sightings but people around here kind of keep these things quiet. I have received several inquiries from investigators since I posted the original email. I had also posted the following that referenced a supposed juvenile Bigfoot photographed in Arkansas: Later....