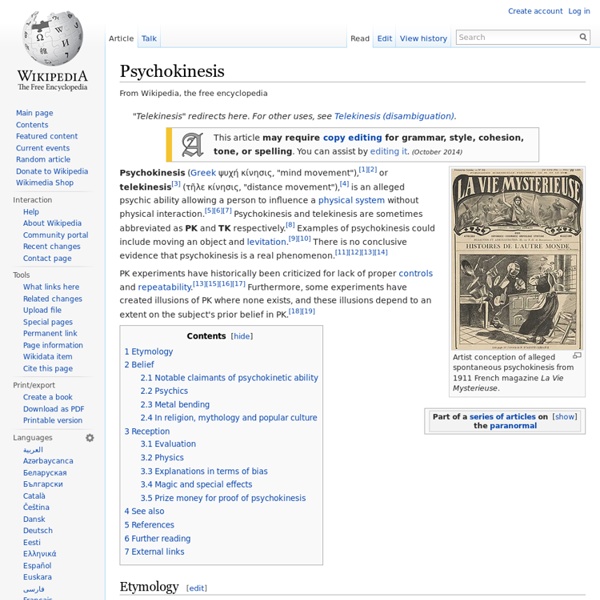 Artist conception of alleged spontaneous psychokinesis from 1911 French magazine La Vie Mysterieuse. PK experiments have historically been criticized for lack of proper controls and repeatability.[13][15][16][17] Furthermore, some experiments have created illusions of PK where none exists, and these illusions depend to an extent on the subject's prior belief in PK.[18][19] Etymology[edit] The word psychokinesis, a portmanteau of the Greek language words ψυχή ("psyche"), meaning mind, soul, spirit, or breath; and κίνησις ("kinesis"), meaning motion, movement,[1][2] was coined in 1914 by American author Henry Holt in his book On the Cosmic Relations.[20][21][22] The term was later adopted by American parapsychologist J. B. The word telekinesis, a portmanteau of the Greek language words τῆλε ("tēle"), meaning distance, and κίνησις ("kinesis"), meaning motion,[4] was coined in 1890 by Russian psychical researcher Alexander N. Belief[edit] Notable claimants of psychokinetic ability[edit] [edit]

Skepticism in psychic research The concept of skepticism in psychic research is one which I personally believe to be quite important. The nature of reality is revealed to us by our senses, and by our preconceived notions of what reality is. There is a story of a European explorer who was about to land on the shores of South America, a shore inhabited by Native Americans who had never experienced any contact with the white man before, and had no notion of their technology. The sum of the story goes as such: since the natives were unaware of the concept of ships floating on water, as the ships approached harbor, no natives were aware of their presence. This elder sat and meditated, concentrating on the water that was out of place. This story was described to me in a modern popular documentary about quantum physics and the nature of reality entitled 'what the bleep do we know' - which comes highly recommended and delves deep into the topic I'm discussing.

Skeptical Investigations - Investigating Skeptics - Anomalistics - The Pathology of Organized Skepticism Home > Investigating Skeptics > Anomalistics > The Pathology of Organized Skepticism The Pathology of Organized Skepticism by Guy Lyon Playfair Skeptical about Skeptics Back to... L. Organised skepticism, or what the late Marcello Truzzi called pseudoskepticism, is another matter, as Leiter found when he infiltrated a group in his area called the "Philadelphia Association for Critical Thinking" or PhACT. He found some of them not only to be ignorant about the subjects they were claiming to debunk,but to have something of a phobia about even reading anything containing views opposed to theirs, as if afraid of contamination. Then, after getting to know some of the members quite well, he made an interesting discovery: "Each one who has disclosed personal details of their formative years... has had an unfortunate experience with a faith-based philosophy, most often a conventional major religion." Organised skeptics, he concludes, are "scientifically inclined but psychologically scarred".

The Dark Twin: The Topics -- Bio-Psychokinesis As of July 1, 2013 ThinkQuest has been discontinued. We would like to thank everyone for being a part of the ThinkQuest global community: Students - For your limitless creativity and innovation, which inspires us all. Teachers - For your passion in guiding students on their quest. Partners - For your unwavering support and evangelism. Parents - For supporting the use of technology not only as an instrument of learning, but as a means of creating knowledge. We encourage everyone to continue to “Think, Create and Collaborate,” unleashing the power of technology to teach, share, and inspire. Best wishes, The Oracle Education Foundation

Mystery Skulls The Mystery Skull Skull suturing and baby teeth in a detached piece of maxilla (upper jaw and palate) indicate death around 5 years of age. The face is missing from the upper bridge of the nose to the foramen magnum (the hole where the spine enters the skull), but the cranium and most of both eye orbits (the external parts of the sockets) are intact. This skull's degree of humanity is at issue because several aspects of its morphology defy categorizing as genetic defect (inherited), congenital deformation (birth defect), or inflicted deformity (cranial binding). The Human Skull A human skull assumed to be Amerindian (an Indian from North or South America) because the rear of its cranium exhibits the flattening that results from being carried in infancy on a cradle board. Binding Experts suggest the child's high degree of occipital (rear-skull) deformity would most likely have resulted from the cranial binding practiced by primitive cultures around the world. Brain Volume Weight Symmetry

Ghost Hunt - Ghost Hunting at Dudley Castle - International Paranormal Acknowledgment Awards Friday 16th September 9pm - 3am Dudley castle is reported to be one of the most haunted castles in the Uk. It is not surprising so many visitors have reported sightings and strange goings on within the fortified walls. Join our team and Psychic Medium Barrie John on a vigil never to be forgotten. The remnants of Dudley Castle stand aloft a limestone hill, steeped in history it has been the place of death, suicide and chaos for centuries. Sightings in this historic landmark have included: A mysterious figure pacing up and down the parapets. The sight and sound of a lone drummer boy. And the infamous grey lady....to name a few. Join our team and Psychic Medium and see what we discover. You will be given a guided tour of the grounds by an expert and hear an in depth history of the castle before breaking down into smaller teams. Finally you will have the oppurtunity to break off in your smaller teams and conduct your own vigils, under the watchful eyes of our experienced team.

International Paranormal Acknowledgment Awards As many of you now know, this site is here to stay! It's under new management and we just had our first membership meeting this past Sunday in the chat room. We had 9 people in attendance, which is a great start. A couple exciting projects emerged: First, we are going to offer a free webinar/lecture once a month, on the first Sunday of each month, beginning in May, at 6pm PDT/9 pm EST. AUTHENTIC SPIRIT PHOTO PAGE & COMPETITION: Check out this page (button above) to submit your authentic spirit/orb/psi photography. Andrew Dee - Spirit Medium, Clairvoyant and Psychic based in Liverpool Psychic Chat Rooms Ezine Psychic FM