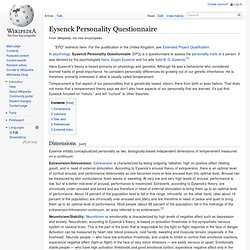 It was devised by the psychologists Hans Jürgen Eysenck and his wife Sybil B. G. Eysenck.[1] Hans Eysenck's theory is based primarily on physiology and genetics. 8 Ways to be UBER Charismatic. What did JFK, Marilyn Monroe and Hitler all have in common? 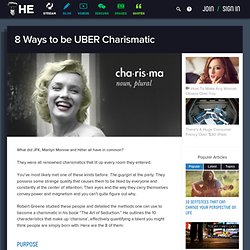 They were all renowned charismatics that lit up every room they entered. You’ve most likely met one of these kinds before. The guy/girl at the party. Meyer Friedman. Meyer Friedman (July 13, 1910–April 27, 2001) was an American cardiologist who developed, with colleague R.H. 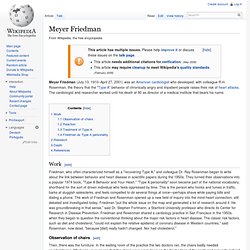 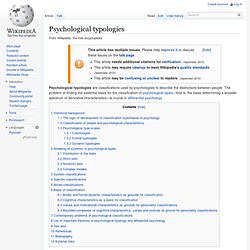 The problem of finding the essential basis for the classification of psychological types—that is, the basis determining a broader spectrum of derivative characteristics—is crucial in differential psychology. Historical background[edit] Minnesota Multiphasic Personality Inventory. The Minnesota Multiphasic Personality Inventory (MMPI) is the most widely used and researched standardized psychometric test of adult personality and psychopathology.[1] Psychologists and other mental health professionals use various versions of the MMPI to develop treatment plans; assist with differential diagnosis; help answer legal questions (forensic psychology); screen job candidates during the personnel selection process; or as part of a therapeutic assessment procedure.[2] The original MMPI, first published by the University of Minnesota Press in 1943, was replaced by an updated version, the MMPI-2, in 1989. 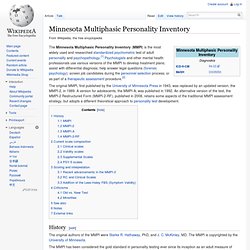 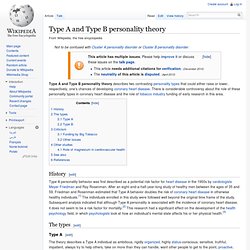 There is considerable controversy about the role of these personality types in coronary heart disease and the role of tobacco industry funding of early research in this area. History[edit] Type A personality behavior was first described as a potential risk factor for heart disease in the 1950s by cardiologists Meyer Friedman and Ray Rosenman. After an eight-and-a-half-year-long study of healthy men between the ages of 35 and 59, Friedman and Rosenman estimated that Type A behavior doubles the risk of coronary heart disease in otherwise healthy individuals.[1] The individuals enrolled in this study were followed well beyond the original time frame of the study. The types[edit] Type A[edit] Type B[edit] Personality psychology.

Personality psychology is a branch of psychology that studies personality and its variation between individuals. 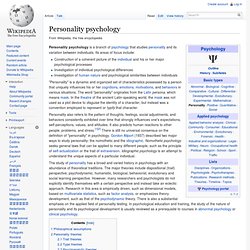 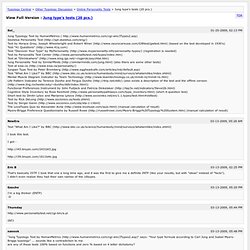 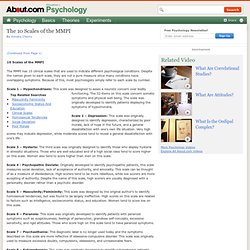 Despite the names given to each scale, they are not a pure measure since many conditions have overlapping symptoms. Because of this, most psychologists simply refer to each scale by number. Scale 1 – Hypochondriasis: This scale was designed to asses a neurotic concern over bodily functioning. The 32-items on this scale concern somatic symptoms and physical well being. Psychological Testing: Minnesota Multiphasic Personality Inventory - Psychological Testing and Assessment, Neuropsychology and Intelligence Quotient Testing.

Wikipedia Updated: Nov 10th 2010 The Minnesota Multiphasic Personality Inventory (MMPI) is one of the most frequently used personality tests in mental health. 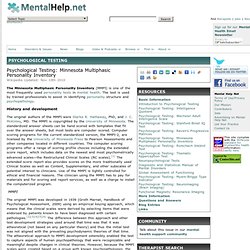 The test is used by trained professionals to assist in identifying personality structure and psychopathology. History and development The original authors of the MMPI were Starke R. Hathaway, PhD, and J. The original MMPI was developed in 1939 (Groth Marnat, Handbook of Psychological Assessment, 2009) using an empirical keying approach, which means that the clinical scales were derived by selecting items that were endorsed by patients known to have been diagnosed with certain pathologies.[2][3][4][5][6] The difference between this approach and other test development strategies used around that time was that it was atheoretical (not based on any particular theory) and thus the initial test was not aligned with the prevailing psychodynamic theories of that time. Current scale composition.

Personality test based on Jung and Briggs Myers typology. Personality test. A personality test is a questionnaire or other standardized instrument designed to reveal aspects of an individual's character or psychological makeup. The first personality tests were developed in the 1920s[1] and were intended to ease the process of personnel selection, particularly in the armed forces. Since these early efforts of these test, a wide variety of personality tests have been developed, notably the Myers Briggs Type Indicator (MBTI), the MMPI, and a number of tests based on the Five Factor Model of personality. Estimates of how much the industry is currently worth are between $2 and $4 billion a year.[2] Personality tests are used in a range of contexts, including but not limited to, individual and relationship counseling, career counseling, employment testing, occupational health and safety and customer interaction management.

History[edit] Your True Self Revealed - Fast Fun Free Personality Tests. This is your private report page. If you wish to share your results with your friends and family, use the links below. You have not saved your results to your account yet. If this is your report page and you wish to save your results, click here to sign in. You are an Advocating Creator. personalDNA. Body of Thought: How Trivial Sensations Can Influence Reasoning, Social Judgment and Perception. Why do we look up to those we respect, stoop to the level of those we disdain and think warmly about those we love? Why do we hide dirty secrets or wash our hands of worries? Why do we ponder weighty subjects and feel a load lift after we have made a decision? Why do we look back on the past and forward to the future? Tuning In To The Brain's 'Cocktail Party Effect'

Scientists are beginning to understand how the human brain accomplishes a remarkable trick known as the cocktail party effect. It's what allows us to pick out the words from just one speaker even when we're in a room full of other voices that are just as loud. For decades, scientists have puzzled over how our brain is able to focus on certain sounds while filtering out others. Now they say they're finding clues, thanks to new research on birds and bats. Birds don't spend much time at cocktail parties, but they do face a similar auditory challenge, says Frederic Theunissen of the University of California, Berkeley.

Notes from the Undergrad. By Andrew Newburg | Yawn. Go ahead: Laugh if you want (though you’ll benefit your brain more if you smile), but in my professional opinion, yawning is one of the best-kept secrets in neuroscience. Even my colleagues who are researching meditation, relaxation, and stress reduction at other universities have overlooked this powerful neural-enhancing tool. However, yawning has been used for many decades in voice therapy as an effective means for reducing performance anxiety and hypertension in the throat. Several recent brain-scan studies have shown that yawning evokes a unique neural activity in the areas of the brain that are directly involved in generating social awareness and creating feelings of empathy. One of those areas is the precuneus, a tiny structure hidden within the folds of the parietal lobe.

7 Skills To Become Super Smart. Ways to Improve Human Intelligence. This briefing is intended to pull into one convenient, single frame of reference a body of key information which currently is scattered across a great many different contexts. Normal distribution. Living in the Present Is a Disorder. The opening titles sequence of Game of Thrones conveys a presentist style. Image: HBO. Recognition primed decision. Decision theory. Carl Jung. Carl Gustav Jung (/jʊŋ/; German: [ˈkarl ˈɡʊstaf jʊŋ]; 26 July 1875 – 6 June 1961), often referred to as C. G. Jung, was a Swiss psychiatrist and psychotherapist who founded analytical psychology.[2] Learning about the brain, body and how it all connects. Myers-Briggs Type Indicator.

Model of personality types. Intuitionism. Complex (psychology) For alternate usage, see complexity. A complex is a core pattern of emotions, memories, perceptions, and wishes in the personal unconscious organized around a common theme, such as power or status (Schultz, D. & Schultz, S., 2009). Cognitive Atlas. Psst! The Human Brain Is Wired For Gossip. Hide captionLearning juicy details about someone can change the way you see them — literally, according to a new study. August Darwell/Getty Images Hearing gossip about people can change the way you see them — literally.

Negative gossip actually alters the way our visual system responds to a particular face, according to a study published online by the journal Science. The findings suggest that the human brain is wired to respond to gossip, researchers say. And it adds to the evidence that gossip helped early humans get ahead. 40 Lessons for Finding Strength in Hard Times. 28 Ways to Stop Complicating Your Life. Enneagram Test. 10 Myths About Introverts. Personality Types Under Stress. INTJ Relationships. Rational temperament. INTJ. MBTI online test.