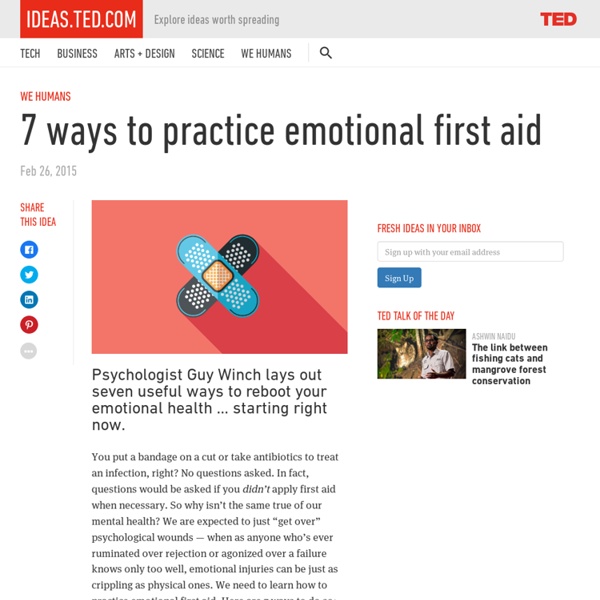 You put a bandage on a cut or take antibiotics to treat an infection, right? No questions asked. In fact, questions would be asked if you didn’t apply first aid when necessary. So why isn’t the same true of our mental health? We are expected to just “get over” psychological wounds — when as anyone who’s ever ruminated over rejection or agonized over a failure knows only too well, emotional injuries can be just as crippling as physical ones. We need to learn how to practice emotional first aid. Pay attention to emotional pain — recognize it when it happens and work to treat it before it feels all-encompassing. Yes, practicing emotional hygiene takes a little time and effort, but it will seriously elevate your entire quality of life. See Guy Winch’s TED Talk, Why we all need to practice emotional first aid.

Tips for Keeping a Gratitude Journal Psychology researchers aren’t necessarily Thanksgiving experts—they may not know how to make fluffy stuffing, say, or beat the traffic to your in-laws’ house—but they have become a fount of wisdom on thanksgiving (with a small “t”). Over the past decade, they’ve not only identified the great social, psychological, and physical health benefits that come from giving thanks; they’ve zeroed in on some concrete practices that help us reap those benefits. And perhaps the most popular practice is to keep a “gratitude journal.” How Will You Celebrate International Day of Happiness? How many times a year do you get an excuse to celebrate happiness? Why not right now? The UN has declared March 20, 2013 to be the first International Day of Happiness. Why happiness now? More and more, people are asking what is the definition of human "progress," and recognizing that it must include happiness and well-being, not just bottom line economic growth. The good news is that it that you don't need to go searching for the secret happiness sauce -- you already have everything you need to ignite happiness within yourself and influence those around you.

How to Be Present and Peaceful When You Can't Stop Thinking “Rather than being your thoughts and emotions, be the awareness behind them.” ~Eckhart Tolle When I first started practicing Zen (or presence), I used to believe I could become completely thoughtless.

What Are the Effects of Cyberbullying? Bullying—including cyberbullying—causes significant emotional, psychological, and physical distress. Just like any other victim of bullying, cyberbullied kids experience anxiety, fear, depression, and low self-esteem. They also may experience physical symptoms, mental health issues, and struggle academically. Here's a closer look at the emotional, mental, and physical effects of cyberbullying. Emotional Effects of Cyberbullying How not to talk to someone with depression Being depressed is really not enjoyable. Depression takes many forms for many different people – some people have highs and lows, some have major depression, some have functional days and others never do. Depression can involve a huge array of treatments including therapy, medication and experimental modalities.

Teenage depression - Family Lives If your teenager is showing signs of depression, you may find yourself wondering whether it's 'just a phase' or something more serious. On average, three young people in every classroom are affected by mental health problems like depression. Many go undiagnosed and never get the help they need. Mental health problems cause more early deaths than either heart disease or cancer. Many teenagers are particularly vulnerable to depression, caused by the huge number of biological and social changes going on in their life, along with other factors like money worries and family breakdown. It can be difficult for many parents to know whether a child's moody or miserable behaviour is a sign of something more serious.

Teenage Stress Teens are under more stress today than ever before. Sound like an exaggeration? Despite the fact that I am often prone to hyperbole, consider this: being a teenager is not easy. Adolescence has always been a tricky developmental period defined by fundamental yet somewhat difficult changes (physical, cognitive, and social) experienced by teens as they make their way from childhood toward adulthood. These transitions trigger changes in the way the teen sees him/herself, and the way that others see and treat him or her. They are no longer children, but not yet adults, and this series of transitions not only has an impact on the individual experiencing the transitions, but also on parents, peers, and society as a whole.

When Maurice Shanahan needed help with his mental health, the GAA was there Maurice Shanahan picked up a hurling All Star a couple of weekends ago, and by revealing his struggle on the evening of the event, he hoped to encourage others to seek help, just as he did, writes Michael Moynihan The lunchtime crowd was emptying out of the Dungarvan pub when a middle-aged couple broke away to approach two big men putting away BLTs in the corner. The couple shook hands with the two men and congratulated the younger one in particular. “And not just on the All Star, either. What you said was very important, not just for you, and not just for Waterford either.

Jack Green: GB hurdler on depression & the American dream By Tom Reynolds BBC Sport "I am a runner. I have depression. I still believe I can be the best in the world." Jack Green has never wanted for talent or self-belief. But in the last 18 months, the Great Britain 400m hurdler has discovered his unique sporting prowess is both a gift and a curse. Audio Bhutan Broadcasting Service – Interview with Dasho Karma Ura on Democracy in Bhutan Democracy - Part 1 [download] (right-click, save-file-as) Democracy - Part 2 19 Things to Start Doing for Yourself in the New Year “And suddenly you know… it’s time to start something new and trust the magic of new beginnings.” ~Meister Eckhart Did you know that 80 percent of New Year’s resolutions fail? That’s pretty crazy. What does depression feel like? Trust me – you really don’t want to know This is Depression Awareness Week, so it must be hoped that during this seven-day period more people will become more aware of a condition that a minority experience, and which most others grasp only remotely – confusing it with more familiar feelings, such as unhappiness or misery. This perception is to some extent shared by the medical community, which can’t quite make its mind up whether depression is a physical “illness”, rooted in neurochemistry, or a negative habit of thought that can be addressed by talking or behavioural therapies. I’m not concerned about which of these two models is the more accurate. I’m still not sure myself. My primary task here is to try to explain something that remains so little understood as an experience – despite the endless books and articles on the subject. Because if the outsider cannot really conceptualise serious depression, the 97.5% who do not suffer from it will be unable to really sympathise, address it or take it seriously.