The Importance of Emotional Intelligence in the Workplace 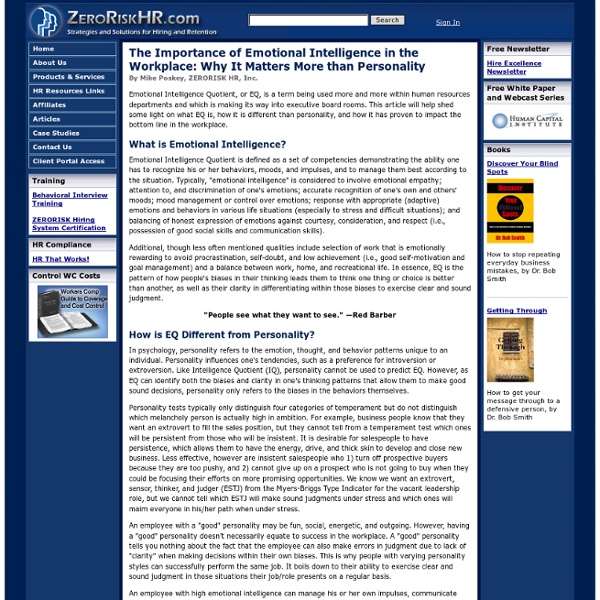 By Mike Poskey, ZERORISK HR, Inc. Emotional Intelligence Quotient, or EQ, is a term being used more and more within human resources departments and which is making its way into executive board rooms. This article will help shed some light on what EQ is, how it is different than personality, and how it has proven to impact the bottom line in the workplace. What is Emotional Intelligence? Emotional Intelligence Quotient is defined as a set of competencies demonstrating the ability one has to recognize his or her behaviors, moods, and impulses, and to manage them best according to the situation. Additional, though less often mentioned qualities include selection of work that is emotionally rewarding to avoid procrastination, self-doubt, and low achievement (i.e., good self-motivation and goal management) and a balance between work, home, and recreational life. "People see what they want to see." How is EQ Different from Personality? EQ Competencies that Correlate to Workplace Success

Is Emotional Intelligence Overrated? Forget IQ versus EQSix Seconds After 100 years of research, there’s little agreement on the definition of intelligence or how to measure IQ. Yet Adam Grant insists cognitive skill trumps all, and “Emotional Intelligence Is Overrated.” His critique is wrong, but important. His latest post on LinkedIN is a follow up to his Atlantic piece on “The Dark Side of Emotional Intelligence,” where he warns it’s risky to develop emotional competence. For example, he even speculates that Hitler used emotional intelligence to manipulate people into a frenzy of mindless loyalty. Framing this as “IQ versus EQ” demonstrates neither. Traditional psychological research has treated emotion and cognition as separate, even competitive. Emotions Drive People That said, in the human brain, no signal is more powerful than emotion. Science is a process of mounting evidence. The Evidence for Emotional Intelligence This year, for the first time, a “big data” approach was used to assess the significance of emotional intelligence around the globe.