How to Hack Your Brain 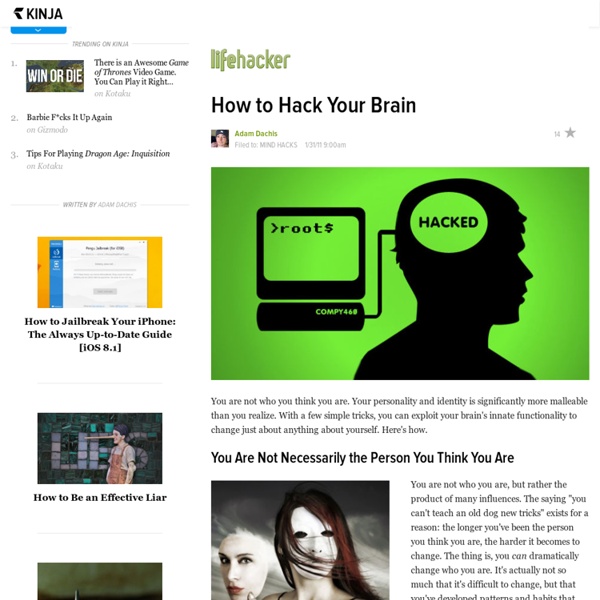 @septentriones: Haha, what you're saying is actually quite indeed close to correct, though there is a bit more. We are a culmination of our experiences, but that doesn't mean that our minds cannot advance further than that, for all that is required is the idea of an experience, for example, I have never been sledding down a mountain. However, I can imagine a sled, imagine a mountain, and myself in motion, so I can build the idea of the experience. If you can transcend your own personal experiences and create new ones idly, your potential for knowledge is increased 10fold.

Top 5 Wireless Home Security Internet Cameras - Why You Need One written by: Michael Dougherty•edited by: Aaron R.•updated: 8/28/2011 Crime does not only happen on the Internet. 8 Things Everybody Ought to Know About Concentrating “Music helps me concentrate,” Mike said to me glancing briefly over his shoulder. Mike was in his room writing a paper for his U.S. History class. On his desk next to his computer sat crunched Red Bulls, empty Gatorade bottles, some extra pocket change and scattered pieces of paper. In the pocket of his sweat pants rested a blaring iPod with a chord that dangled near the floor, almost touching against his Adidas sandals. On his computer sat even more stray objects than his surrounding environment.

100 Exquisite Adjectives By Mark Nichol Adjectives — descriptive words that modify nouns — often come under fire for their cluttering quality, but often it’s quality, not quantity, that is the issue. Plenty of tired adjectives are available to spoil a good sentence, but when you find just the right word for the job, enrichment ensues. The Ten Most Iconic Photos Of The 1940s The Most Iconic Photos Of The 1940s: Hitler in Paris, 1940 Taken at the height of World War Two and after Adolf Hitler had taken Paris, this picture depicts Hitler surveying his conquest with his various cronies and became one of the most iconic photos of the 1940s and World War 2. The Last Jew in Vinnitsa, 1941

25 TED Talks that will change how you see the world Mahatma Gandhi once said, “Live as if you were to die tomorrow. Learn as if you were to live forever.” If this sounds like a philosophy you can relate to, then you’ll love TED talks. These informational 17 minute presentations are given at annual conferences by some of the world’s greatest thinkers. How to make a Bump Key Video Hi, my name is Tyler and I am going to show you how to make and use a bump key. A bump key when properly used will open any lock that it fits into. Now, this technique is not new.

Depression: They Just Don’t Get It I’ve learned in 12-step support groups that if you decide to share something important with a loved one, or try to mend a broken relationship, you should do so without any expectation of a response. I wish I had followed that advice the day I sent a family member an incredibly personal piece that I wrote about my severe depression (suicidal thoughts and all), and the first moments of dawn, hoping that it would make us closer. Her response was one word: “Thanks.” I felt like Princess Leia in “Star Wars” when she cries out to Han Solo (before he leaves for some empire war): “I love you!” And he says back, “I know!” But part of my disappointment was my own fault.