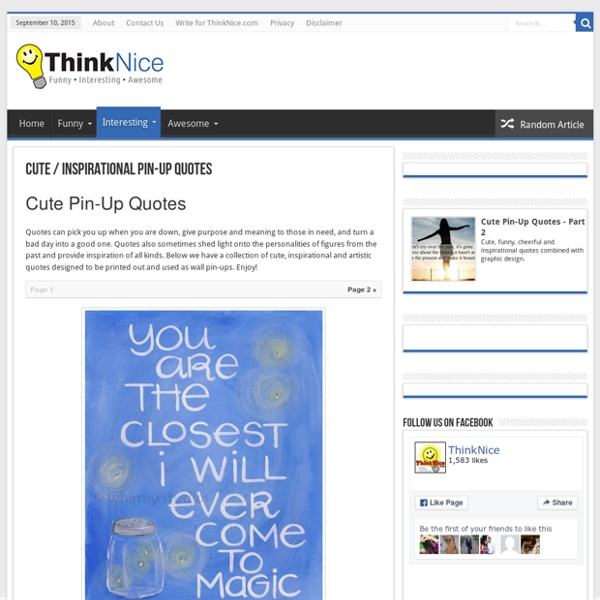 Quotes can pick you up when you are down, give purpose and meaning to those in need, and turn a bad day into a good one. Quotes also sometimes shed light onto the personalities of figures from the past and provide inspiration of all kinds. Below we have a collection of cute, inspirational and artistic quotes designed to be printed out and used as wall pin-ups. Enjoy! “You Are the Closest I Will Ever Come to Magic” “My attitude is based on how you treat me.” “If you wait for perfect conditions, you will never get anything done.” “Happy Girls Are the Prettiest” “Always believe that something wonderful is about to happen.” “Do What You Can with What You Have Where You Are” “The People Who Know The Least About You Always Have The Most To Say.” Albert Einstein Quote “Logic will get you from A to Z: Imagination will get you everywhere.” “Thou Shall Not Take Sh! “Your Face is Just Fine, But You’ll Have To Put A Bag Over That Personality.” “Just Because I Cannot See It, Doesn’t Mean I Can’t Believe It”

Inspirational Quotes to Brighten Your Day Just wanted to share a few inspirational quotes to get you through this hump day. Everyday may not be perfect and bright. but every day is truly a blessing that we are given and a chance to make a difference! Kathleen Bunn Top 10 Most Inspiring Quotes of Lao Tzu Lao Tzu was the most important spiritual Chinese sage. His name, which is also often called Laozi, literally means “Old Master” and is generally considered an honorific. He lived in the 6th century BC, at the same time as Confucius, who was born a generation after Lao Tzu. He once sought out Lao Tzu who told him “Strip yourself of your proud airs and numerous desires, your complacent demeanor and excessive ambitions. Lao Tzu is the father of the Chinese spiritual tradition Taoism, mainly because of his text called Tao te Ching (Tao: the way of all life, te: the fit use of life by men, ching: text or classic). It is based on the Tao (The Way), which is the creator and sustainer of all things in the Universe, and the practice of doing by nondoing (wu-wei) that enables the disciple to unite with the Tao. Lao Tzu wrote his only book Tao Te Ching just before he walked away from the Chou empire he served. 1. This first sentence of his teachings seems paradoxical. 2. 3. 4. 5. 6. 7. 8. 9. 10.

Programmes | Happiness Formula | Test your happiness Psychologists say it is possible to measure your happiness. This test designed by psychologist Professor Ed Diener from the University of Illinois, takes just a minute to complete. To find out how happy you are just look at the five statements below and decide whether you agree or disagree using a 1-7 scale. Please be open and honest in your responding - remember your answers are totally private. Once you have answered all five questions press submit and we will calculate your score. Strongly disagree Disagree Slightly disagree Neither agree nor disagree Slightly agree Agree Strongly agree Below are five statements that you may agree or disagree with. What makes you makes you happy To understand life satisfaction scores, it is helpful to understand some of the components that go into most people's experience of happiness. One of the most important influences on happiness is social relationships. Other sources of happiness For many people these are sources of satisfaction.

The Law of Attraction In this post I want to describe what the Law of Attraction is, how you can use it to attract beautiful things to your life, and then attempt to explain how it works. If you have never heard about the law of attraction before, it may seem like a bizarre concept at first, but don’t let that prevent you from learning what could easily be one of the most important things you can learn in your life. To put it in simple words, the Law of Attraction states that your intentions become your reality, therefore the more you think about something, the more chances you have to bring it to reality. The Law of Attraction states that all the power comes from the universe, because at the lowest level, we are all made of the same thing: energy. Now, you can ignore how the law of attraction works at the lowest level, and still get all the benefits from it. Successful people have used the Law of Attraction for centuries to achieve the greatest results in history. This is the most interesting part for you.

The Happiness Project I Have a Dream' - Martin Luther King Jr. (audio only) I am happy to join with you today in what will go down in history as the greatest demonstration for freedom in the history of our nation. Five score years ago, a great American, in whose symbolic shadow we stand today, signed the Emancipation Proclamation. This momentous decree came as a great beacon light of hope to millions of Negro slaves who had been seared in the flames of withering injustice. It came as a joyous daybreak to end the long night of their captivity. But one hundred years later, the Negro still is not free. One hundred years later, the life of the Negro is still sadly crippled by the manacles of segregation and the chains of discrimination.

Martin Luther King, Jr. Dr. King became a civil rights activist early in his career. He led the 1955 Montgomery Bus Boycott and helped found the Southern Christian Leadership Conference (SCLC) in 1957, serving as its first president. With the SCLC, King led an unsuccessful 1962 struggle against segregation in Albany, Georgia (the Albany Movement), and helped organize the 1963 nonviolent protests in Birmingham, Alabama that attracted national attention following television news coverage of the brutal police response. King also helped to organize the 1963 March on Washington, where he delivered his famous "I Have a Dream" speech. There, he established his reputation as one of the greatest orators in American history. On October 14, 1964, King received the Nobel Peace Prize for combating racial inequality through nonviolence. In 1968, King was planning a national occupation of Washington, D.C., to be called the Poor People's Campaign, when he was assassinated on April 4 in Memphis, Tennessee. Doctoral studies

PEACE Johnny Cash John R. "Johnny" Cash (February 26, 1932 – September 12, 2003) was a singer-songwriter, actor, and author,[2] widely considered one of the most influential American musicians of the 20th century.[3] Although primarily remembered as a country icon, his genre-spanning songs and sound embraced rock and roll, rockabilly, blues, folk, and gospel. This crossover appeal won Cash the rare honor of multiple induction in the Country Music, Rock and Roll, and Gospel Music Halls of Fame. Cash was known for his deep bass-baritone voice,[a] distinctive sound of his Tennessee Three backing band, a rebelliousness[6][7] coupled with an increasingly somber and humble demeanor, free prison concerts,[8][page needed] and trademark look, which earned him the nickname "The Man in Black".[b] He traditionally began his concerts with the simple "Hello, I'm Johnny Cash." Personal life[edit] Early life[edit] The Cash children were: Roy, Margaret Louise, Jack, J. Marriages and family[edit] Heritage[edit] Career[edit]

John F. Kennedy John Fitzgerald Kennedy (May 29, 1917 – November 22, 1963), commonly known as "Jack" or by his initials JFK, was an American politician who served as the 35th President of the United States from January 1961 until he was assassinated in November 1963. Kennedy was assassinated in Dallas, Texas on November 22, 1963. Lee Harvey Oswald was accused of the crime and arrested that evening. Jack Ruby shot and killed Oswald two days later, before a trial could take place. Since the 1960s, information concerning Kennedy's private life has come to light. Early life and education John Fitzgerald Kennedy was born at 83 Beals Street in Brookline, Massachusetts, on May 29, 1917, to businessman/politician Joseph Patrick "Joe" Kennedy, Sr. (1888–1969) and philanthropist/socialite Rose Elizabeth Fitzgerald (1890–1995). Jack's brothers were Joseph Patrick "Joe" Kennedy, Jr. (1915–1944), Robert Francis "Bobby" Kennedy (1925–1968), and Edward Moore "Ted" Kennedy (1932–2009). Military service (1941–45)

» 11 Ways to Cure Someday Syndrome Editor’s note: This is a guest post from Alex Fayle of the Someday Syndrome blog. Someday Syndrome: not doing what you want to because you don’t know what it is, because you’re procrastinating about it, or because you have too much stuff getting in your way. Everyone suffers from Someday Syndrome at some point in their lives, often catching it repeatedly. For me, most recently, I’d been saying that I really should give running a try without doing anything about it. You probably have something similar going on in your life – a project, a task, a goal – that you just haven’t got around to doing yet. Right? I could quote Nike and say: Just Do It, but if it were that simple Someday Syndrome wouldn’t exist. I decided that here had to be an easier way than waiting for pain to push me into getting over myself and getting on with my goals. 1. Maybe you’re not doing something because in reality, it doesn’t fit with who you are. 2. 3. 4. I have a goal of running 20K next November. 5. 6. 7. 8. 9.