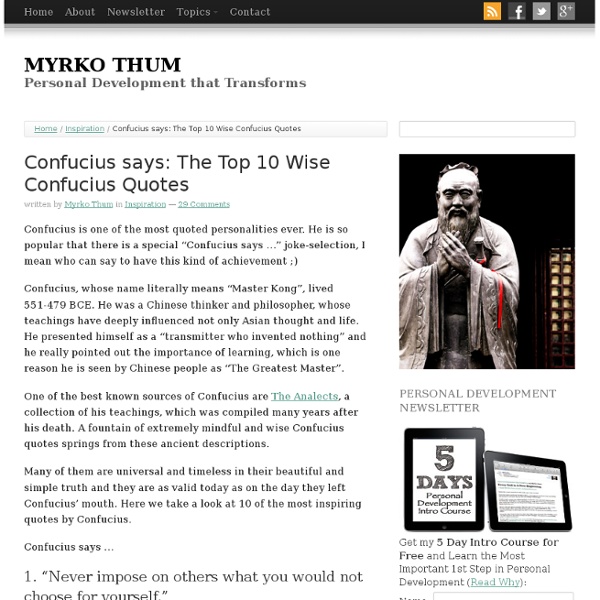 Confucius is one of the most quoted personalities ever. He is so popular that there is a special “Confucius says …” joke-selection, I mean who can say to have this kind of achievement ;) Confucius, whose name literally means “Master Kong”, lived 551-479 BCE. He was a Chinese thinker and philosopher, whose teachings have deeply influenced not only Asian thought and life. He presented himself as a “transmitter who invented nothing” and he really pointed out the importance of learning, which is one reason he is seen by Chinese people as “The Greatest Master”. One of the best known sources of Confucius are The Analects, a collection of his teachings, which was compiled many years after his death. Many of them are universal and timeless in their beautiful and simple truth and they are as valid today as on the day they left Confucius’ mouth. Confucius says … 1. It’s the “Golden Rule” and the essence of real compassion. 2. 3. Those quotes are just perfect. 4. Amazing. 5. 6. 7. 8. 9. 10.

Personal Development - UrbanMonk.Net Top 10 Most Inspiring Quotes of Lao Tzu Lao Tzu was the most important spiritual Chinese sage. His name, which is also often called Laozi, literally means “Old Master” and is generally considered an honorific. He lived in the 6th century BC, at the same time as Confucius, who was born a generation after Lao Tzu. He once sought out Lao Tzu who told him “Strip yourself of your proud airs and numerous desires, your complacent demeanor and excessive ambitions. They won’t do you any good. Lao Tzu is the father of the Chinese spiritual tradition Taoism, mainly because of his text called Tao te Ching (Tao: the way of all life, te: the fit use of life by men, ching: text or classic). It is based on the Tao (The Way), which is the creator and sustainer of all things in the Universe, and the practice of doing by nondoing (wu-wei) that enables the disciple to unite with the Tao. Lao Tzu wrote his only book Tao Te Ching just before he walked away from the Chou empire he served. 1. This first sentence of his teachings seems paradoxical. 2.

Abundance Tapestry — Creating A Life Of Abundance Collected Quotes from Albert Einstein [Note: This list of Einstein quotes was being forwarded around the Internet in e-mail, so I decided to put it on my web page. I'm afraid I can't vouch for its authenticity, tell you where it came from, who compiled the list, who Kevin Harris is, or anything like that. Still, the quotes are interesting and enlightening.] "Any intelligent fool can make things bigger, more complex, and more violent. Copyright: Kevin Harris 1995 (may be freely distributed with this acknowledgement) Simple Productivity | Zen Habits