Are You Empathic? 3 Types of Empathy and What They Mean 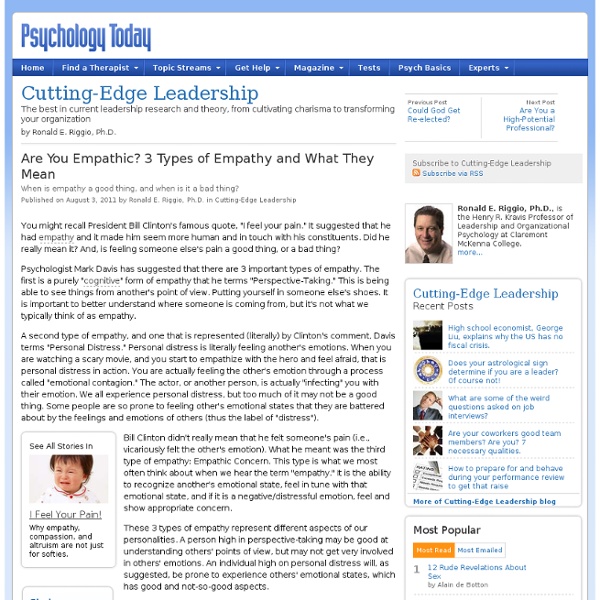 You might recall President Bill Clinton's famous quote, "I feel your pain." It suggested that he had empathy and it made him seem more human and in touch with his constituents. Did he really mean it? And, is feeling someone else's pain a good thing, or a bad thing? Psychologist Mark Davis has suggested that there are 3 important types of empathy. A second type of empathy, and one that is represented (literally) by Clinton's comment, Davis terms "Personal Distress." Bill Clinton didn't really mean that he felt someone's pain (i.e., vicariously felt the other's emotion). These 3 types of empathy represent different aspects of our personalities. Years ago we conducted a study with hospice nurses caring for terminally-ill patients. In reality, we all have some level of each of the types of empathy. Related:  & docs-01

Self-Care for the Highly Sensitive Person. Discovering I am a highly sensitive person was a revelation. Growing up, I had a hard time relating to other kids. I heard over and over, “You’re so sensitive!” I had extreme anxiety. I was diagnosed with ADHD. That was home to me. Part of me really doesn’t like labels but the highly sensitive part of me was completely saved by identifying myself as a sensitive person. Vaguely Relephant Reads: You Don’t have to be an Alcoholic to be Wasted. The Truth about (Surviving) Whole Foods. ~ Kelly MacLean Read I didn’t hear the term until I was in my 30s. Elaine Aron’s book, The Highly Sensitive Person has helped many sensitive people gain a better understanding of themselves. However, in typical ADD fashion, I first heard the term Highly Sensitive Person and Googled it. They were describing me. It explained why I felt allergic to life so much of the time. Many highly sensitive people can relate to one or all of the following: Feeling overwhelmed by social situations and crowds. Read Next: I love travel.

'Why Should We Care?'—What to Do About Declining Student Empathy - Commentary By Paul Anderson and Sara Konrath Picture a college student appealing for a higher grade in his professor's office. The student admits to a mixed performance during the semester, but he still doesn't understand why the professor gave him such a low grade. "Can't my worst grades just be dropped, including those zeros on the missed quizzes?" "But," the professor counters, "think of the students who worked hard all semester to read, take notes, and study, and who sacrificed time from other important activities to earn good grades. The student may agree that he doesn't want to be unfair, but he remains convinced that he deserves a higher grade. Many who teach experience versions of this conversation regularly and attempt to reason with wheedling students using arguments that rely on a principle of basic fairness. Imaginatively taking on another person's thoughts and identifying with their emotions are two habits at the core of empathy.

Living Like the Tortoise: Doubling Your Life Span with One Simple Breathing Technique | Culture of Awareness From The Mind Unleashed, August 1, 2015 Is it possible for humans to live for 200 years, or even more? It seems improbable without some kind of freakish genetic modification, but this isn’t necessary according to ancient wisdom in the Bhagavad Gita, and the Tirukkural. Among vertebrates, the tortoise is one of the longest living animals on our planet. Unconfirmed reports talk of the tortoise living for as many as 400 years, and it is not unusual to find a tortoise like Jonathan, that is 182 years old. How Do You Breathe? Much of the science of yoga was gained from watching nature and her creatures. Though there are animals on our planet that live even longer, like sponges and sea clams, that can live for more than 400 years, humans are often thought to be relegated to a lifespan of around 70 years – and that’s when all key indicators of life or life force are excellent. Poets and sages knew better. Additionally, here is a couplet from Tirukkural: Pranayama Defined Here’s why: Like this: Related

Body Language ⭐ 10 Life Changing Things You Must Understand if You Are Empathic or Highly Sensitive Subscribe and get Galactic News Daily Updates: “And those who were seen dancing were thought insane by those who could not hear the music.” ― Nietzsche HJ: Being highly sensitive and empathic is truly a blessing, however it can often feel like a curse before you learn some important points about how to manage and live with your abilities. In this article, Mely Brown shares some extremely important things to remember to make your life as pleasureable and enjoyable as possible. – Truth 10 Life-Changing Tips for Highly Sensitive People Read more… "According to the “Fair Use” clause of International Copyright Law, the authors declare that the use of the photos, videos and information in this academic research are analyzed for purposes of “criticism, comment, news reporting, teaching, scholarship, or research” according to Section 107 of Title 17 of the US Code." Related 7 Ways to Manage Your Sensitive Energy By Doreen Virtue As a highly sensitive person, you can feel everyone’s emotions. In "2015"

Fuller Picture of Oxytocin’s Role Emerging By Rick Nauert PhD Senior News Editor Reviewed by John M. Grohol, Psy.D. on August 2, 2011 There is good news and not-so-good news about the hormone oxytocin. It seems to promote a number of essential social functions and has been found to enhance social behaviors for people with autism. But new research suggests a downside as well. Oxytocin has sometimes been called the “love hormone” or “trust hormone” as studies have shown the chemical to be associated with the ability to maintain healthy interpersonal relationships and psychological boundaries with other people. But a study by Andrew Kemp, Ph.D., of the University of Sydney and published in Current Directions in Psychological Science, suggests the actions of oxytocin are more complex than what is commonly believed. Kemp and coauthor Adam Guastella, Ph.D., report that a number of studies have shown that oxytocin accents a variety of emotions. These are also both social emotions, but they’re negative. APA Reference Nauert, R. (2011).

Behind the Paranormal Free Recorded Shows 2016 Shows 2015 Shows 2014 Shows 2013 Shows 2012 Shows 2011 Shows 2010 Shows 2009 Shows 2008 Shows Special Shows and Podcasts, 2008-Present Home | What's New? Copyright © 2013 New River Press/Barking Cat Books. 7 ways to practice emotional first aid You put a bandage on a cut or take antibiotics to treat an infection, right? No questions asked. In fact, questions would be asked if you didn’t apply first aid when necessary. Pay attention to emotional pain — recognize it when it happens and work to treat it before it feels all-encompassing. Yes, practicing emotional hygiene takes a little time and effort, but it will seriously elevate your entire quality of life. See Guy Winch’s TED Talk, Why we all need to practice emotional first aid.

Developing Emotional Awareness: Recognizing & Harnessing Your Emotions We often hear from people who feel overwhelmed by stress, family, work and relationship problems, health challenges, and painful emotions. They’ve tried many approaches to help themselves feel better, but they just can’t seem to follow through, or what they’ve done hasn't helped them enough. If this sounds familiar, you know that it’s all too easy to become discouraged when you’re stuck. The problem is not willpower—all the willpower in the world won’t matter if you can’t manage stress or keep your emotions in balance. The good news: you can learn these important emotional skills, no matter your age or the obstacles you face. That’s what this free online program teaches. Skill building, like any learning, takes time and effort.

Why Dignity Matters Why Dignity Matters When I tell people that I have written a book about dignity, the response is always the same: They pause for a moment and say "that is so important." When I ask them to tell me why they think it's important, the most common response is that "we all want that feeling of self-worth ." While it is true, my experience is that in spite of its universal appeal, it's a topic that rarely gets discussed. We may not have words to describe it, but we all have an internal experience of it. We know how great it is to be seen, heard, and acknowledged for who we are and treated as if we mattered. Matters of dignity are at the heart of every interaction we have on a daily basis and the time has come for us to pay attention to them and to give them voice. This is why I have focused my attention on matters of dignity.

Rural Energy - Free Choices 2030 Welcome to the FREE Choices section which includes an online tool offering the latest information on a range of sustainable energy solutions for households, businesses and agriculture in rural areas. The decentralised energy solutions featured here improve energy efficiency, contribute to security of supply and help reduce greenhouse gas emissions in rural areas. What’s more they offer potential savings opportunities and in some cases an income source for rural dwellers. For each solution, research consultancy Ecofys has developed factsheets that contain information regarding main benefits, technical workings, suitability, and related costs, savings and earnings. The list of rural energy solutions is non-exhaustive and the FREE initiative remains open to engage with interested stakeholders. Cleaner and energy efficient technologies can tremendously improve the energy situation of rural areas – check out the solutions already available now and make the right energy choice today!