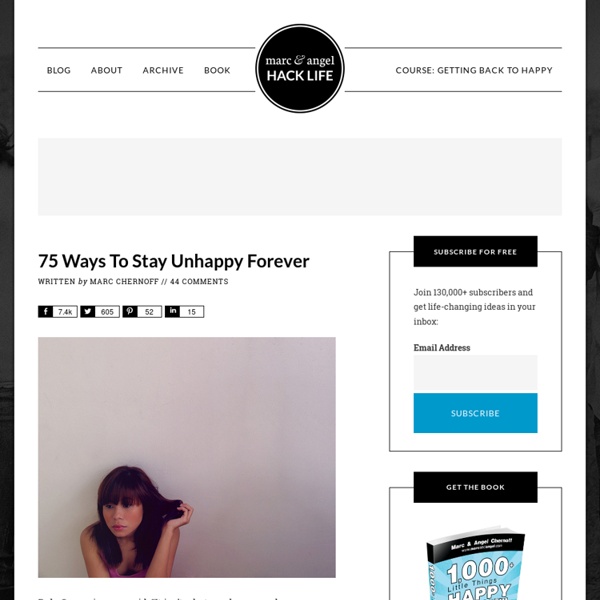 Dale Carnegie once said, “It isn’t what you have, or who you are, or where you are, or what you are doing that makes you happy or unhappy. It’s what you think about.” I don’t think anyone could say it any better than that. I’ve watched so many friends search tirelessly for happiness by changing jobs, moving to new cities, pursuing intimate relationships, and tweaking all sorts of other external factors in their lives. And guess what? They’re still unhappy. So with that in mind, here are 75 ways to stay unhappy forever. And now that you know what not to do, let me tell you a secret about happiness. In fact, according to a recent scientific study, overall levels of happiness decline from one’s teens until one’s 40s and then pick up again until they peak in one’s early 70s. Photo by: Helga Weber Related 8 Things Unhappy People Refuse to Admit “People are just as happy as they make up their minds to be.” August 29, 2013 In "Happiness" 9 Things You Do NOT Need to Be Happy September 15, 2013

50 Life Secrets and Tips Memorize something everyday.Not only will this leave your brain sharp and your memory functioning, you will also have a huge library of quotes to bust out at any moment. Poetry, sayings and philosophies are your best options.Constantly try to reduce your attachment to possessions.Those who are heavy-set with material desires will have a lot of trouble when their things are taken away from them or lost. Possessions do end up owning you, not the other way around. Become a person of minimal needs and you will be much more content.Develop an endless curiosity about this world.Become an explorer and view the world as your jungle. Stop and observe all of the little things as completely unique events. Try new things. Read “Zen and the Art of Happiness” by Chris Prentiss.This book will give you the knowledge and instruction to be happy at all times regardless of the circumstances.

Why We Are Weird Email Somewhere Else During my competitive cross-country running days it wasn’t uncommon for me to run five miles at 5AM and another ten miles at 10PM, six days a week. When I first started these early morning and late night runs, the experience was rather brutal. Can’t Relate Over time, I became quite proficient at doing this. I don’t compete in races anymore, but I still run almost every day. She Was Right Last night, I went running on the Pacific Beach boardwalk at 11PM. The woman had long blonde dreadlocks, several piercings in her ears and nose, tattoos on both arms, and a Grateful Dead t-shirt on. She stopped strumming her guitar and began to chuckle as soon as she saw me looking down at the joint. “It’s none of my business,” I quickly replied. “Anyway,” she continued. “So, what’s your point?” “Well thousands of people run on this boardwalk every single day, but you seem to be the only runner I see in the middle of the night. Conclusion Some of us run in the middle of the night.

Political Myths WE Live By by Peter Lach-newinsky Whenever most conversations I have these days move around to matters political I often find myself in a quandary. I have the choice of either accepting the tacit assumptions behind the other person’s remarks or questions, or else remaining largely silent and trying to change the topic. This is because I don’t share the tacit assumptions. I would classify most of these usually unexamined assumptions as social democratic or liberal. 1. If ‘democracy’ means ‘rule by the people’, it isn’t. 2. Just like any communist party, when it comes to the crunch, the major parties are all run top-down from head office. 3. This reduces the core political notion of freedom to the freedom to choose between the two wings of the one pro-capitalist and neo-liberal party. The key investment decisions are not made by politicians and thus elections are only of secondary importance. 4. 5. 6. Politicians may be personally honest or dishonest to varying degrees. 7. 8. It isn’t. 9. 10. 11. They are not mistakes.

10 Things to Try for 30 Days You’ve probably heard that it takes 21 days to change a habit, right? Well, apparently there isn’t any hard evidence that this is a fact. According to Jeremy Dean over at PsyBlog, the “21 day myth may well come from a book published in 1960 by [Dr Maxwell Maltz] a plastic surgeon.” According to Dean, Dr Maxwell Maltz based an argument for a 21-day adjustment period after noticing that amputee patients took about 21 days to adjust to their loss. In reality it can take much longer than 21 days to lose a habit or start a new one. A new month is just about to begin, so this is the perfect time to try something new for 30 days. 10. Wash with only with water for 30 days. This is low on the list because, on the surface anyways, it will be easy to achieve. Perhaps soap is overrated. 9. Keep your hands to yourself for one month. Celibacy has more than one definition, but today the most common definition of a celibate person is someone who isn’t having sex with anyone else. 8. 7. 6. 5. 4. 3. 2. 1.

100 Ways to Unchain - Unchain Your Lifestyle 9 Mind-Bending Epiphanies That Turned My World Upside-Down | Raptitude.com Over the years I’ve learned dozens of little tricks and insights for making life more fulfilling. They’ve added up to a significant improvement in the ease and quality of my day-to-day life. But the major breakthroughs have come from a handful of insights that completely rocked my world and redefined reality forever. The world now seems to be a completely different one than the one I lived in about ten years ago, when I started looking into the mechanics of quality of life. Maybe you’ve had some of the same insights. 1. The first time I heard somebody say that — in the opening chapter of The Power of Now — I didn’t like the sound of it one bit. I see quite clearly now that life is nothing but passing experiences, and my thoughts are just one more category of things I experience. If you can observe your thoughts just like you can observe other objects, who’s doing the observing? 2. Of course! 3. 4. 5. Yikes. 6. This discovery was a complete 180 from my old understanding of emotions. 7.