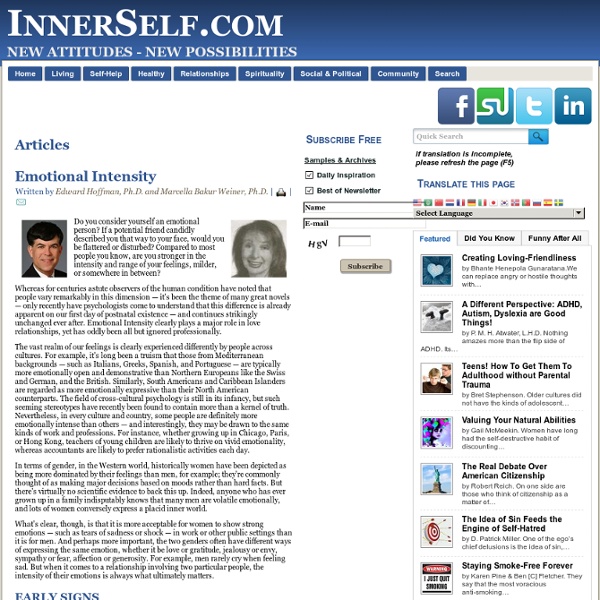 Do you consider yourself an emotional person? If a potential friend candidly described you that way to your face, would you be flattered or disturbed? Compared to most people you know, are you stronger in the intensity and range of your feelings, milder, or somewhere in between? Whereas for centuries astute observers of the human condition have noted that people vary remarkably in this dimension — it's been the theme of many great novels — only recently have psychologists come to understand that this difference is already apparent on our first day of postnatal existence — and continues strikingly unchanged ever after. The vast realm of our feelings is clearly experienced differently by people across cultures. In terms of gender, in the Western world, historically women have been depicted as being more dominated by their feelings than men, for example; they're commonly thought of as making major decisions based on moods rather than hard facts. ____ 1. ____ 2. ____ 3. ____ 4. ____ 5.

Soul Science - Home Self Diagnosis MyTherapy offers a free subscription that includes: Psychiatric diagnostic assessment Quality of Life assessment Computerized private diary (psychiatric progress note) Computerized graphing of your progress Statistical analysis of your progress Disclaimer We guarantee that no research whatsoever is done with this data, and all information gathered is held in the strictest of confidence. The author of this computer program, Dr. Phillip Long, is a retired psychiatrist in Vancouver, Canada, and this website has been extensively reviewed by the College of Physicians and Surgeons of British Columbia, Canada. Your complete confidentiality is protected.

Digital Health Conference and Hack 2012 - CometBird Test your happiness Psychologists say it is possible to measure your happiness. This test designed by psychologist Professor Ed Diener from the University of Illinois, takes just a minute to complete. To find out how happy you are just look at the five statements below and decide whether you agree or disagree using a 1-7 scale. Please be open and honest in your responding - remember your answers are totally private. Once you have answered all five questions press submit and we will calculate your score. Strongly disagree Disagree Slightly disagree Neither agree nor disagree Slightly agree Agree Strongly agree Below are five statements that you may agree or disagree with. What makes you makes you happy To understand life satisfaction scores, it is helpful to understand some of the components that go into most people's experience of happiness. One of the most important influences on happiness is social relationships. Other sources of happiness For many people these are sources of satisfaction.

Transcending the Matrix Control System Personality Test - 41 Questions. 1 Personality. 100% Free. A companion to phenomenology and ... Burns Depression Inventory Quiz - Depression Test for Self Evaluation Get Topic Updates Share Advertisement Quiz Written by Emily Lapkin & Medically Reviewed by Scott Pearlman, M.D. Did you know that most people with depression don't recognize the warning signs, and never seek treatment? 1. Neuroscience of Free Will On several different levels, from neurotransmitters through neuron firing rates to overall activity, the brain seems to "ramp up" before movements. This image depicts the readiness potential (RP), a ramping-up activity measured using EEG. The onset of the RP begins before the onset of a conscious intention or urge to act. Some have argued that this indicates the brain unconsciously commits to a decision before consciousness awareness. Others have argued that this activity is due to random fluctuations in brain activity, which drive arbitrary, purposeless movements.[1] Philosophers like Daniel Dennett or Alfred Mele consider the language used by researchers. Overview[edit] ...the current work is in broad agreement with a general trend in neuroscience of volition: although we may experience that our conscious decisions and thoughts cause our actions, these experiences are in fact based on readouts of brain activity in a network of brain areas that control voluntary action... William R.