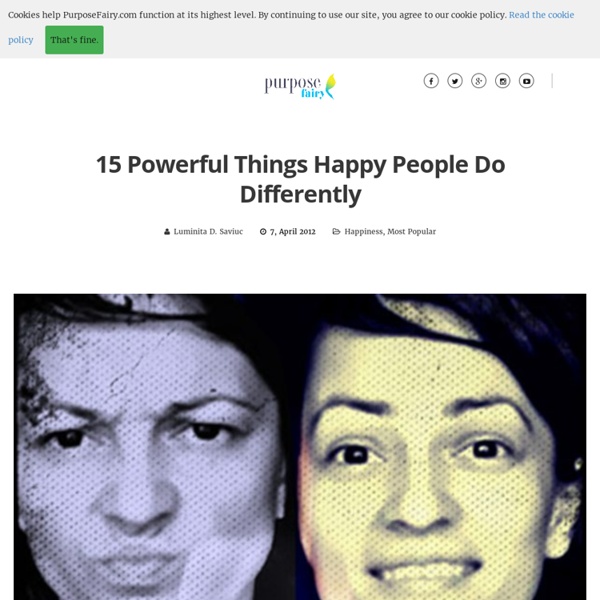 What are the differences between happy people and unhappy people? Of course, it should be very obvious: happy people are happy while unhappy people are unhappy, right? Well, that is correct. But, we want to know what happy people do differently, so I have put together a list of things that happy people do differently than unhappy people. 1. Love vs. Well, I can tell you for sure that those people who are really happy, fear less and love a lot more. 2. Happy people understand that you can’t really change a situation by resisting it, but you can definitely change it by accepting that it is there and by understanding that there might be a reason for its existence. 3. Really happy people know that it’s not healthy to hold on to anger. “Holding on to anger is like grasping a hot coal with the intent of throwing it at someone else; you are the one who gets burned.” ~ Buddha 4. They trust themselves and the people around them. 5. 6. 7. 8. 9. 10. 11. 12. 13. 14. 15. ~love, Luminita Comments

The Art of Non-Conformity Challenging Authority Since 1978 I am a writer, traveler, and entrepreneur with the goal of visiting every country in the world while connecting with other world-changers. Continue reading about Chris Mission Accomplished! Bullish Life: When Men Get Too Emotional To Have A Rational Argument Jennifer Dziura writes life coaching advice weekly here on TheGloss, and career coaching advice Fridays on TheGrindstone. On the night of the election, I was alone in my apartment, refreshing CNN.com. The electoral tally went above 270.

The Learning Brain Gets Bigger With age and enough experience, we all become connoisseurs of a sort. After years of hearing a favorite song, you might notice a subtle effect that’s lost on greener ears. Perhaps you’re a keen judge of character after a long stint working in sales. Or maybe you’re one of the supremely practiced few who tastes his money’s worth in a wine. 10 Tips to Let Go of the Past & Embrace the Future "Two monks were on a pilgrimage. One day, they came to a deep river. At the edge of the river, a young woman sat weeping because she was afraid to cross the river without help. Berne Convention for the Protection of Literary and Artistic Works of September 9, 1886, completed at PARIS on May 4, 1896, revised at BERLIN on November 13, 1908, completed at BERNE on March 20, 1914, revised at ROME on June 2, 1928, at BRUSSELS on June 26, 1948, at STOCKHOLM on July 14, 1967, and at PARIS on July 24, 1971, and amended on September 28, 1979 The countries of the Union, being equally animated by the desire to protect, in as effective and uniform a manner as possible, the rights of authors in their literary and artistic works, Recognizing the importance of the work of the Revision Conference held at Stockholm in 1967,

The Benefits of Daydreaming A new study suggests that a daydreaming is an indicator of a well-equipped brain Does your mind wander? During a class or meeting, do you find yourself staring out the window and thinking about what you’ll do tomorrow or next week? As a child, were you constantly reminded by teachers to stop daydreaming?

Top 40 Useful Sites To Learn New Skills The web is a powerful resource that can easily help you learn new skills. You just have to know where to look. Sure, you can use Google, Yahoo, or Bing to search for sites where you can learn new skills , but I figured I’d save you some time. Invalidation Excerpts from an article by Cathy Palmer-Scruggs (Full article) Recently, I had a few situations to come up that called for some comfort from my friends. I really needed them. How People are Fooled by Evidence Rationality is the crowning achievement of our species. The ability to use evidence is true the cornerstone of science, medicine, and our legal system. We use rational methods, too, in daily life – we assess an applicant’s resume, a child’s IQ, or the mileage of a used car to predict the likelihood of good performance later on. Given that we often use information to make decisions both large and small, how good are we at assessing evidence?

Related:
Related:  Self-Improvement   -  grossnationalhappiness   -  Practical Happiness Advice That Works | The Positivity Blog   -  :: Authentic Happiness :: Using the new Positive Psychology   -  The Laws of Simplicity   -  29 Happiness Hacks to Feel Better Now « Scott H Young   -  How to Stop Mumbling and Speak Clearly: 15 Steps   -  21 Habits of Happy People   -  The 30 Most Satisfying Simple Pleasures Life Has to Offer   -  Handbook for Life: 52 Tips for Happiness and Productivity   -  Web design, web development, mobile & content strategy by Happy Cog   -  LIFE AS A HUMAN – How to Be Alone   -  75 Ways To Stay Unhappy Forever   -  Overcoming Procrastination Instantly Using Self Talk - Litemind   -  7 Essential Books on the Art and Science of Happiness | Brain Pickings   -  HugeDomains.com - happinessexercises.com is for Sale (happinessexercises)   -  Action for Happiness   -  Awesome Variations on Meditation   -  Iso-Tones - Miscellaneous   -  Browse All Yoga Class Videos: | DoYogaWithMe.com   -  Ease Neck and Shoulder Tension Quickly with Desk Yoga   -  Lojong - Wikipedia, the free encyclopedia   -  How to See the Aura | Explore Meditation   -  Happiness - Wikipedia, the free encyclopedia   -  Cute Pin-Up Quotes | Inspirational Quotes | Funny Quotes   -  10 Wise Choices to Skyrocket Your Happiness   -  Scientists discover most relaxing tune ever   -  Track Your Happiness   -  1 of 5. How to Access Superconsciousness - YouTube   -  The 5 Tibetan Rites - Do it Along - YouTube   -  Knowmad Society   -  How to Trick Your Brain for Happiness | Greater Good   -  30 Things to Start Doing for Yourself   -  the quiet place   -  How to Become an Early Riser   -  Home - Project Happiness   -  7 Kundalini Yoga Postures to Clear the Chakras