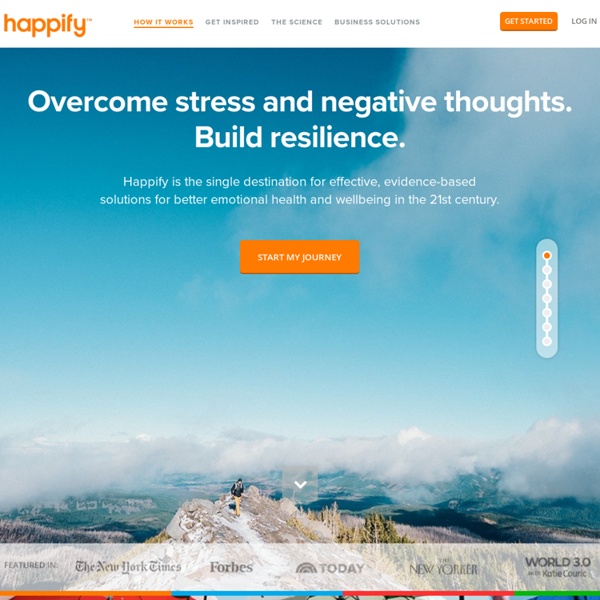 Hierarchy of Needs What motivates behavior? According to humanist psychologist Abraham Maslow, our actions are motivated in order achieve certain needs. Maslow first introduced his concept of a hierarchy of needs in his 1943 paper "A Theory of Human Motivation" and his subsequent book Motivation and Personality. This hierarchy suggests that people are motivated to fulfill basic needs before moving on to other, more advanced needs. This hierarchy is most often displayed as a pyramid. The lowest levels of the pyramid are made up of the most basic needs, while the more complex needs are located at the top of the pyramid.

Stop Trying to Be Happy If you have to try to be cool, you will never be cool. If you have to try to be happy, then you will never be happy. Maybe the problem these days is people are just trying too hard. Happiness, like other emotions, is not something you obtain, but rather something you inhabit. When you’re raging pissed and throwing a socket wrench at the neighbor’s kids, you are not self-conscious about your state of anger. You are not thinking to yourself, “Am I finally angry? 11-quotes-from-alan-watts-that-will-change-your-life Alan Watts is considered as the foremost interpreter of Eastern disciplines for the contemporary West. He had an astonishing and an indescribable way of writing the unwritable. Among all the qualities of this great orator and writer, he had an unique gift of expressing complex thoughts in the form of simple and illustrated thoughts. The simple way he exemplified and expressed all his reflections made him and universal philosopher, someone that could be comprehended by the vast majority of the people.

Knutepunkt - Nordic Larp Wiki Knutepunkt is an annual conference on Nordic style larp which has been running since the first event in Norway in 1997. It cycles through each of the Nordic countries as hosts; in Sweden it's called Knutpunkt, in Denmark Knudepunkt and in Finland Solmukohta. In English the translation would be meeting point or nodal point. Though the conference started out strictly as an event for larp (Live action role-playing), and it's 3 founders Erlend Eidsem Hansen, Hanne Grasmo and Margrete Raaum all were larporganisers of 360 degrees Nordic Style larps, Knutepunkt has since embraced role-playing games in a more general fashion. Today the conference still has an emphasis on larp, but programs devoted to educational larping, freeform, blackbox larps, gametheory and traditional tabletop role-playing are common. List of Knutepunkts

Swedish Pollen Extract RADIATION UPDATE / July 11, 2013: Concern with On-going Fukushima Radiation Release Numerous recent news articles have reported that the Fukushima meltdown is not yet contained and continues unabated across America. The long-term carcinogenic consequences of this radiation compels serious attention to your DNA and immune system. The Secret Language Of Comic Strips When you think about it, the real world doesn’t have much to do with your favorite newspaper’s comic section. If you were a cartoon character, canaries would erupt from your cracked skull and fly around in circles every time you hit your head. When you swore, your curse words would censor themselves as a long, seemingly random series of nonverbal iconography. If you didn’t bathe, visible smell waves would waft off of you.

A Life Worth Living: Albert Camus on Our Search for Meaning and Why Happiness Is Our Moral Obligation by Maria Popova Why “the demand for happiness and the patient quest for it” isn’t a luxury or a mere need but our existential duty. “To decide whether life is worth living is to answer the fundamental question of philosophy,” Albert Camus wrote in his 119-page philosophical essay The Myth of Sisyphus in 1942.

Dreams: Stages of Sleep When we sleep, we go through five sleep stages. The first stage is a very light sleep from which it is easy to wake up. The second stage moves into a slightly deeper sleep, and stages three and four represent our deepest sleep. Our brain activity throughout these stages is gradually slowing down so that by deep sleep, we experience nothing but delta brain waves -- the slowest brain waves (see "Brain Waves" sidebar).