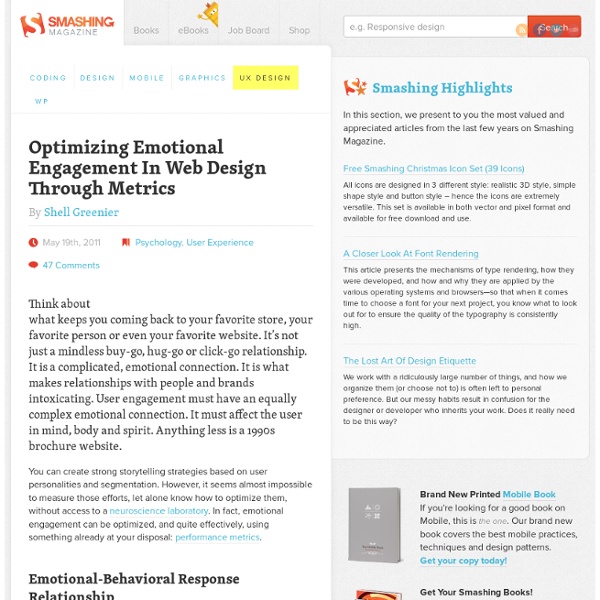 Advertisement Think about what keeps you coming back to your favorite store, your favorite person or even your favorite website. It’s not just a mindless buy-go, hug-go or click-go relationship. You can create strong storytelling strategies based on user personalities and segmentation. Emotional-Behavioral Response Relationship Let’s start with the basics: an emotion is a psychophysiological response in your body to a stimulus. For example: But you don’t have to be face to face in order to read a person’s behavioral clues. By The Numbers: Behavioral Response Behavioral psychologists have classified emotions in numerous different theories. Plutchik’s emotion wheel. When it comes to user experience, emotional engagement builds on itself as the user continues to interact not only with your platform, but with all aspects of your brand online, including SEM, press coverage and social networks. Awareness Attraction Attraction-level engagement keeps users interested in your platform. Investment (al) Related:  Colour & Emotion

Enlarge Your Consciousness in 4 Days, 4 Free - Cover Alsacréations. Agence web, création de site et formations web Plutchik’s wheel of emotions | elif ayiter/alpha auer/… /_________repository Almost all of my current graduate students are working on projects which involve an examination of the nature of emotion. One thing which they have discovered and which seems to have been cropping up in a lot of class discussions is Plutchik‘s list of emotions and the related wheel which he has charted. Not that I am even remotely qualified to argue this, but for me there are a few problems with Plutchik’s list: The biggest gripe that I have is that he seems to omit power/dominion altogether, while he still includes submission for which he sets up the opposite as contempt – and that really makes me wonder. It seems to me that Plutchik’s view of emotions is rose-tinted altogether. And others too, ones that may not be as repulsive but nonetheless are as self-destructive: Such as obstinacy… Pride… Are those not emotions also? In the first version I more or less replicated Plutchik’s structure by following the placements on his lists from top to bottom. And! Click on images to download.

Initializr - Start your HTML5 project in 15 seconds! Our First FREE EBook: Click it with Feeling 20inShare The concept for this book actually began late in 2009 when I began looking at the psychology behind why someone would want to naturally give someone else on the Internet a citation, or link, to their website. At that time I wrote a post on SearchEngineJournal.com entitled “The Psychology Behind Link Giving.” During my research for the piece I was introduced to the work of a psychologist named Robert Plutchik. His work on emotional response outlines all behavior, but for me really explained the core concept behind the idea why certain content goes viral online and other content goes unseen. Robert Plutchik, a psychologist and professor of psychology, focused his work on the topic of emotions. This Theory has Ten Postulates: In 1980, Plutchik created both a 3D cone and 2D wheel model for how emotions were related. Plutchik’s wheel has become a cornerstone of our training at CopyPress. “being able to properly regulate one’s emotions. The marketer’s focus is in two places:

Showcase Of Appetizing Restaurant Websites - Smashing Magazine Advertisement They say the first bite is taken with the eye. If so, these appetizing restaurant websites succeed in whetting our appetites, inviting us to a savoury next bite. In these designs, color scheme and introductory copy show vastly different aspects of the restaurant experience. Because customers are increasingly using mobile browsers to make decisions on the spot, restaurant websites are doing a better job of communicating core information quickly. Showcase Of Restaurant Designs Geogeske This design has printerly qualities, with its eye-catching oranges and whites and oversized headings. Jam Restaurant Upscale modernist and classical elements are used consistently on this website and in the menu and restaurant interior. Benito’s Hat Named after a celebrated Mexican president, this restaurant communicates authenticity and freshness with a green cilantro backdrop and clear devotion to its culinary roots. Barley’s A cozy design rich in grainy colors and sturdy serifs. Last Click

Plutchik’s Eight Primary Emotions And How To Use Them (Part 1 of 2) | Dragons Can Be Beaten June 4, 2010 by Daniel Smith [Guest-posted on Forensics and Faith by Brandilyn Collin] Randy Ingermanson once said that people read books because they want to have an emotional experience. While that’s certainly true of “Twilight”, I think it holds true for all books. Ironically, even though we’ve all experienced many, many emotions throughout our lives, few humans are experts. But where to begin? Many lists of emotions have been generated, yet no matter how much they overlap, they never quite converge. So, how can emotions be classified so that we better understand them, and understanding them better use them in our writings? Joy vs SadnessTrust vs DisgustFear vs AngerSurprise vs Anticipation He also visualized this list as a wheel of sorts, referred to by some as Plutchik’s Flower: Author: Ivan Akira Source: Wikimedia Commons License: Creative Commons Attribution 3.0 Unported Analogous to a color wheel, variations in color intensity correspond to variations in emotional intensity.

Starting Out Organized: Website Content Planning The Right Way - So many articles explain how to design interfaces, design graphics and deal with clients. But one step in the Web development process is often skipped over or forgotten altogether: content planning . Sometimes called information architecture, or IA planning, this step doesn’t find a home easily in many people’s workflow. But rushing on to programming and pushing pixels makes for content that looks shoehorned rather than fully integrated and will only require late-game revisions. Your New Project: How It Goes All Too Often On day one things are great. On day two you get the following: And on day three you get an email that makes half of the junk you got yesterday obsolete. You’re only three days in, and the project is already no fun. We know that a great website relies on all parts working in harmony. Allows you to organize deliverables from various media; Lets you rapidly make changes when needed (it’s called planning for a reason: things change!) The Architecture: Every Brick Counts Slides

Robert Plutchik Robert Plutchik (21 October 1927 – 29 April 2006) was professor emeritus at the Albert Einstein College of Medicine and adjunct professor at the University of South Florida. He received his Ph.D. from Columbia University and he was also a psychologist. He has authored or coauthored more than 260 articles, 45 chapters and eight books and has edited seven books. His research interests include the study of emotions, the study of suicide and violence, and the study of the psychotherapy process.[1] Theory of emotion[edit] Plutchik's psychoevolutionary theory of basic emotions has ten postulates. Plutchik's wheel of emotions[edit] Robert Plutchik also created a wheel of emotions. He suggested 8 primary bipolar emotions: joy versus sadness; anger versus fear; trust versus disgust; and surprise versus anticipation. Publications[edit] Plutchik contributed the "Emotions" article to the encyclopedia, World Book Millennium 2000. Notes[edit] References[edit] External links[edit]

Responsive Web Design: What It Is and How To Use It - Smashing Magazine Advertisement Almost every new client these days wants a mobile version of their website. It’s practically essential after all: one design for the BlackBerry, another for the iPhone, the iPad, netbook, Kindle — and all screen resolutions must be compatible, too. In the field of Web design and development, we’re quickly getting to the point of being unable to keep up with the endless new resolutions and devices. Responsive Web design is the approach that suggests that design and development should respond to the user’s behavior and environment based on screen size, platform and orientation. The Concept Of Responsive Web Design Ethan Marcotte1 wrote an introductory article about the approach, “Responsive Web Design992,” for A List Apart. “Recently, an emergent discipline called “responsive architecture” has begun asking how physical spaces can respond to the presence of people passing through them. Transplant this discipline onto Web design, and we have a similar yet whole new idea.

Psychology of Color: The meaning behind what we see Perhaps no choice is as vital to marketing as color. Whether you are selecting the color for a product or for your email marketing campaign, color has tremendous impact on all of us. Subconsciously, we associate different colors with different things. This infographic examines the psychology of color and looks at some common associations of different colors. While color can be appealing to us visually, a lot more is going on behind the scenes than just an aesthetic. Embed This Graphic On Your Site <img src=” alt=”Psychology of Color Infographic” />Infographic by <a title=”WebpageFX” href=” Embed the Psychology of Color Infographic The psychology of color directly plays into consumer behavior. When you are looking at the best visual choice for your next project, this color infographic should be a handy guide. Marketing with Color Psychology