Being Defensive. Conquering Feelings of Guilt. The Origins of Guilt Guilt can be seen as the price we pay when our behavior violates some standard or belief we hold. 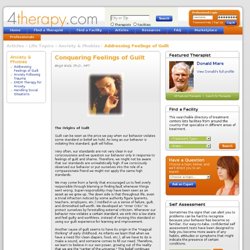 As long as our behavior is violating this standard, guilt will follow. Very often, our standards are not very clear in our consciousness and we question our behavior only in response to feelings of guilt and shame. Therefore, we might not be aware that our standards are unrealistically high. If we consciously observed our behavior or put ourselves into the role of a compassionate friend we might not apply the same high standards. We may come from a family that encouraged us to feel overly responsible through blaming or finding fault whenever things went wrong. Another cause of guilt seems to have its origin in the "magical thinking" of early childhood. But some of us may have kept a certain remnant of magical thinking, like for example "to expect anything good will only bring bad," and vice versa. Unconscious Guilt 1. 2. 3. 4. 5. 6. 7. 8.

Emotion. First published Mon Feb 3, 2003; substantive revision Mon Jan 21, 2013 No aspect of our mental life is more important to the quality and meaning of our existence than emotions. 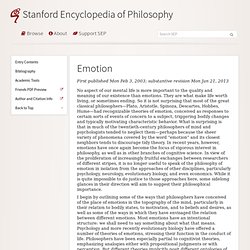 They are what make life worth living, or sometimes ending. So it is not surprising that most of the great classical philosophers—Plato, Aristotle, Spinoza, Descartes, Hobbes, Hume—had recognizable theories of emotion, conceived as responses to certain sorts of events of concern to a subject, triggering bodily changes and typically motivating characteristic behavior. What is surprising is that in much of the twentieth-century philosophers of mind and psychologists tended to neglect them—perhaps because the sheer variety of phenomena covered by the word “emotion” and its closest neighbors tends to discourage tidy theory. In recent years, however, emotions have once again become the focus of vigorous interest in philosophy, as well as in other branches of cognitive science. 1.

How to Express Difficult Feelings. Feelings Versus Thoughts and Beliefs Feelings and thoughts are different, but also are one and the same. 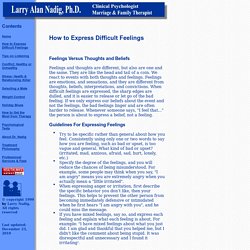 They are like the head and tail of a coin. We react to events with both thoughts and feelings. Feelings are emotions, and sensations, and they are different from thoughts, beliefs, interpretations, and convictions. When difficult feelings are expressed, the sharp edges are dulled, and it is easier to release or let go of the bad feeling. Guidelines For Expressing Feelings Techniques for Expressing Feelings The two following - I feel statements and I messages will help you: When you first start using these techniques they will be cumbersome and awkward to apply, and not very useful if you only know them as techniques.

Which of the two methods you use for expressing your feelings should depend on your goal, the importance or difficulty of your feelings and the situation. I Feel Statements These statements take the form of "When you did that thing I felt this way. I Messages. Basic Emotions. Basic Emotions Many psychologists have claimed that certain emotions are more basic than others, often for very different reasons. 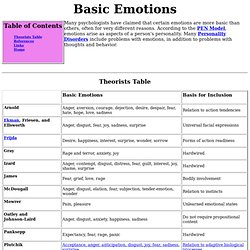 According to the PEN Model, emotions arise as aspects of a person's personality. Many Personality Disorders include problems with emotions, in addition to problems with thoughts and behavior. Theorists Table (This table is taken from Ortony and Turner, 1990.) ~ Flip to top ~ Expressed Emotion and Relapse. Yes, I Can! by Robin Nixon. In my book Creative Visualization For Dummies I introduce a useful visual device I call a Wheel of Emotion, which I think you will find helpful in any personal improvement program. 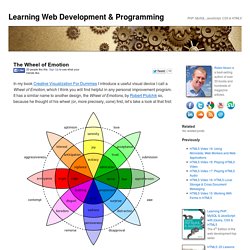 It has a similar name to another design, the Wheel of Emotions, by Robert Plutchik so, because he thought of his wheel (or, more precisely, cone) first, let’s take a look at that first: Plutchik’s Wheel of Emotions With this diagram Plutchik demonstrates a selection of major human emotions, how they are related to each other, and how they are different too (or bipolar as he calls the emotions at opposite sides). At the center of this wheel there are eight basic emotions (as he refers to them) such as ecstacy and grief.