Nicola Morgan. 7 ways to practice emotional first aid. You put a bandage on a cut or take antibiotics to treat an infection, right? 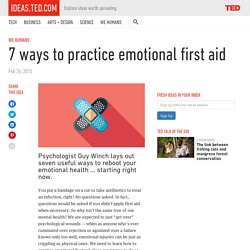 No questions asked. In fact, questions would be asked if you didn’t apply first aid when necessary. So why isn’t the same true of our mental health? We are expected to just “get over” psychological wounds — when as anyone who’s ever ruminated over rejection or agonized over a failure knows only too well, emotional injuries can be just as crippling as physical ones.

We need to learn how to practice emotional first aid. Pay attention to emotional pain — recognize it when it happens and work to treat it before it feels all-encompassing. Yes, practicing emotional hygiene takes a little time and effort, but it will seriously elevate your entire quality of life. See Guy Winch’s TED Talk, Why we all need to practice emotional first aid. Exploring social anxiety. Understanding Anxiety & Panic Attacks. What is worry. Symptoms of stress. Panic assessment. Panic info sheet. Anger management skill cards. Anger warning signs. What does depression feel like? Trust me – you really don’t want to know. This is Depression Awareness Week, so it must be hoped that during this seven-day period more people will become more aware of a condition that a minority experience, and which most others grasp only remotely – confusing it with more familiar feelings, such as unhappiness or misery. 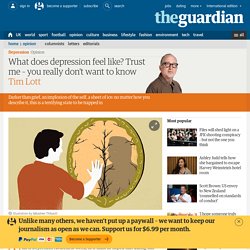 This perception is to some extent shared by the medical community, which can’t quite make its mind up whether depression is a physical “illness”, rooted in neurochemistry, or a negative habit of thought that can be addressed by talking or behavioural therapies. I’m not concerned about which of these two models is the more accurate. I’m still not sure myself. My primary task here is to try to explain something that remains so little understood as an experience – despite the endless books and articles on the subject. Because if the outsider cannot really conceptualise serious depression, the 97.5% who do not suffer from it will be unable to really sympathise, address it or take it seriously. When Maurice Shanahan needed help with his mental health, the GAA was there. Maurice Shanahan picked up a hurling All Star a couple of weekends ago, and by revealing his struggle on the evening of the event, he hoped to encourage others to seek help, just as he did, writes Michael Moynihan The lunchtime crowd was emptying out of the Dungarvan pub when a middle-aged couple broke away to approach two big men putting away BLTs in the corner. 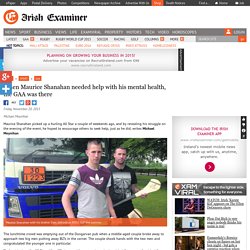 The couple shook hands with the two men and congratulated the younger one in particular. “And not just on the All Star, either. What you said was very important, not just for you, and not just for Waterford either. Well done.” After a few more pleasantries about Lismore’s chances of returning to the senior ranks next season, they were gone out and along the quayside, and Maurice and Dan Shanahan returned to their sandwiches. Ever since the younger of the Shanahan brothers spoke frankly and bravely about his battle with depression, such encounters have been occurring regularly. How not to talk to someone with depression. Being depressed is really not enjoyable. 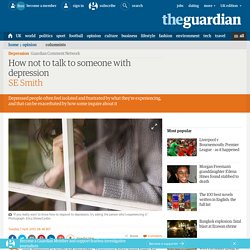 Depression takes many forms for many different people – some people have highs and lows, some have major depression, some have functional days and others never do. Depression can involve a huge array of treatments including therapy, medication and experimental modalities. It can be permanent and intrusive, transitive. In all cases, depression is a monster, and depressed people often feel isolated and frustrated by what they’re experiencing.

That’s made worse by some of the ways people respond to depression, like it’s something easily understood, and sometimes their suggestions are wildly unhelpful. Mental Health: It's Time To Talk. Tips for Keeping a Gratitude Journal. Psychology researchers aren’t necessarily Thanksgiving experts—they may not know how to make fluffy stuffing, say, or beat the traffic to your in-laws’ house—but they have become a fount of wisdom on thanksgiving (with a small “t”). 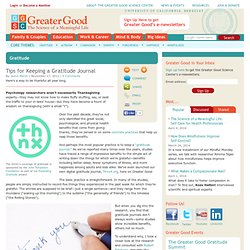 Over the past decade, they’ve not only identified the great social, psychological, and physical health benefits that come from giving thanks; they’ve zeroed in on some concrete practices that help us reap those benefits. And perhaps the most popular practice is to keep a “gratitude journal.” As we’ve reported many times over the years, studies have traced a range of impressive benefits to the simple act of writing down the things for which we’re grateful—benefits including better sleep, fewer symptoms of illness, and more happiness among adults and kids alike. We’ve even launched our own digital gratitude journal, Thnx4.org, here on Greater Good. The basic practice is straightforward. Teenage depression - Family Lives.

If your teenager is showing signs of depression, you may find yourself wondering whether it's 'just a phase' or something more serious. 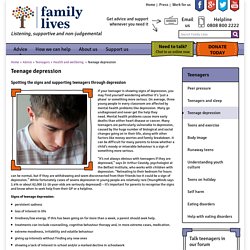 On average, three young people in every classroom are affected by mental health problems like depression. Many go undiagnosed and never get the help they need. Mental health problems cause more early deaths than either heart disease or cancer. Many teenagers are particularly vulnerable to depression, caused by the huge number of biological and social changes going on in their life, along with other factors like money worries and family breakdown. Andrew Solomon: Depression, the secret we share. Mental illness in your family - Family Mental Health Issues. Jack Green: GB hurdler on depression & the American dream. By Tom Reynolds BBC Sport "I am a runner. 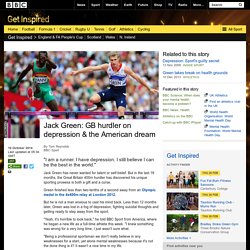 I have depression. I still believe I can be the best in the world. " Jack Green has never wanted for talent or self-belief. But in the last 18 months, the Great Britain 400m hurdler has discovered his unique sporting prowess is both a gift and a curse. Green finished less than two-tenths of a second away from an Olympic medal in the 4x400m relay at London 2012. But he is not a man anxious to cast his mind back. "Yeah, it's horrible to look back," he told BBC Sport from America, where he began a new life as a full-time athlete this week. Depression - Coping with Depression. Mental Health Medication - Headmeds.