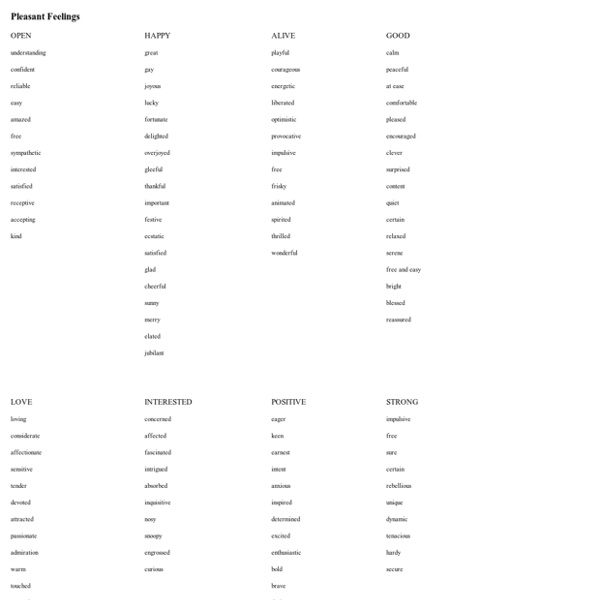 Emotional vs Intellectual Words I have written about persuasive writing in an article where I discuss Ethos, Logos, Pathos. Persuasive writers use words to convince the reader to listen or to act. I found this useful list of words in an interesting article called Common words that suck emotional power out of your content by John Gregory Olson. He explains how words have emotions attached to them, and that you should choose the correct ones for the response you want to elicit from your reader.

10 Simple Ways to Become a Better Writer Do you enjoy writing? Does it come naturally to you? Do colleagues praise you for your crisp, articulate, Nobel Laureate-worthy email updates? Congratulations! Because if you work in an office or run your own business, you’re likely to spend about a quarter of your workday doing one thing: Recognize these emotions The Passion and Reason 15 The book Passion and Reason provides clear definitions and descriptions of 15 separate emotions. These are: Anger — Conspecific threat, trespass, loss attributed to an agent, unjust insult, thwarted goals, plea for justice Envy — Desiring other's stature objects Jealousy — Threat to sexual access. Fright — Concern for a future specific unpleasant event. Science of Sound Sound’s amazing power to heal and transform Healing power of the gong The gong is one of the oldest instruments of healing and has been used for thousands of years in meditation, ceremony and rituals. Today they are used in yoga and meditation classes, sound therapy practice, group gong bath meditations and in palliative and cancer treatment centers to promote health and well-being. They are also a wonderful addition at weddings, family celebrations, workshops, and music festivals.

Chattanooga Tennessee municipal broadband restrictions defended Chattanooga, Tennessee’s municipal broadband network offers affordable broadband service that just happens to deliver the same 1Gbps peak speeds as Google Fiber. Given this apparent success story, you would think that state government officials would be happy to see other municipalities experiment with building their own fiber networks or to at least let Chattanooga expand its fiber service to more areas. But you’d be wrong. After intense lobbying from incumbent ISPs, Tennessee’s state legislature slapped major restrictions on cities’ and towns’ ability to build out their own fiber networks, which means that Chattanooga will not be allowed to expand its network out to more areas as the city had previously planned. “We don’t need unelected federal agency bureaucrats in Washington telling our states what they can and can’t do with respect to protecting their limited taxpayer dollars and private enterprises,” Blackburn explained.