Are You a Bricoleur?, Bricolage and the DIY Paradigm

The qualitative researcher as bricoleur - Qualitative inquiry growth. Bricolage. Bricolage. In the practical arts and the fine arts, bricolage (French for "DIY" or "do-it-yourself projects") is the construction or creation of a work from a diverse range of things that happen to be available, or a work created by such a process. 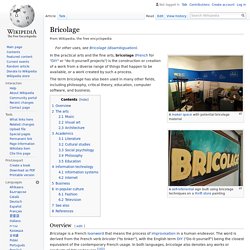 The term bricolage has also been used in many other fields, including philosophy, critical theory, education, computer software, and business. Overview[edit] Bricolage is a French loanword that means the process of improvisation in a human endeavor. The word is derived from the French verb bricoler ("to tinker"), with the English term DIY ("Do-it-yourself") being the closest equivalent of the contemporary French usage. In both languages, bricolage also denotes any works or products of DIY endeavors.[1][2] The arts[edit] Music[edit] Definition: Bricolage. A term referring to the deliberate mixing of qualitative methods and ways of thinking in order to address a specific issue or problem. 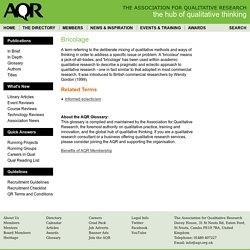 A 'bricoleur' means a jack-of-all-trades, and 'bricolage' has been used within academic qualitative research to describe a pragmatic and eclectic approach to qualitative research - one in fact similar to that adopted in most commercial research. It was introduced to British commercial researchers by Wendy Gordon (1999). Informed eclecticism. The Research Questions for Bricolage. Excerpt from “The Research Questions” of Chapter 1 of my dissertation: As also noted, the bricolage begins broadly with multiple questions and narrows down as the research progresses and choices are made. 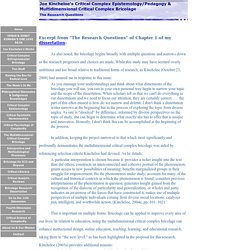 While this study may have seemed overly ambitious and too broad relative to traditional forms of research, as Kincheloe (October 23, 2008) had assured me in response to this issue: As you massage your understandings and think about what dimensions of the bricolage you will use, you can in your own personal way begin to narrow your topic and the scope of the dissertation. When scholars tell us that we can't do everything in our dissertations and we need to focus our attention, they are certainly correct. . . . the part of this often missed is how do we narrow and delimit.

I don't think a dissertation writer narrows at the beginning but in the process of exploring the topic from diverse angles. This is important on multiple fronts. Getting to Grips with Bricolage: wibberley. Bricoleur. Encyclopedia Entry David Wicks Bricoleur is a French common noun with no precise equivalent in English. 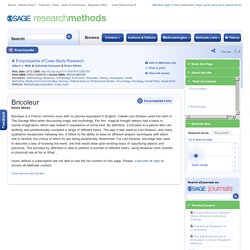 Claude Lévi-Strauss used this term in The Savage Mind when discussing magic and mythology. For him, magical thought always had a basis in human imagination, which was rooted in experience of some kind. By definition, a bricoleur is a person who can skillfully and professionally complete a range of different tasks. Power of the Bricolage - Critical Science of Complexity. Thus, the bricolage is offered as a practical way to construct a critical science of complexity. 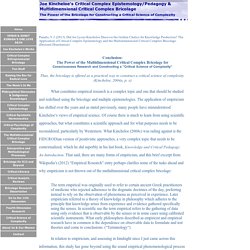 (Kincheloe, 2004a, p. x) What constitutes empirical research is a complex topic and one that should be studied and redefined using the bricolage and multiple epistemologies. The application of empiricism has shifted over the years and as stated previously, many people have misunderstood Kincheloe’s views of empirical science. Of course there is much to learn from using scientific approaches, but what constitutes a scientific approach and for what purposes needs to be reconsidered, particularly by Westerners. What Kincheloe (2008c) was railing against is the FIDURODian version of positivistic approaches, a very complex topic that needs to be contextualized, which he did superbly in his last book, Knowledge and Critical Pedagogy: An Introduction. It is interesting that Aspers (2009) describes the process for phenomenological empirical research as “zigzagging.”

Thank you, Joe. The Power of Bricolage: Expanding Resaerch Methods. Power of the Bricolage - Critical Science of Complexity. "Contextualizing Theories and Practices of Bricolage Research" by Matt Rogers. Abstract. 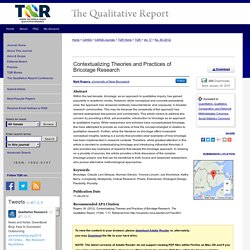 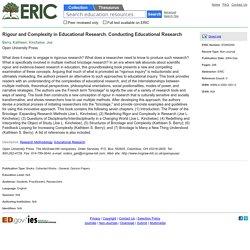 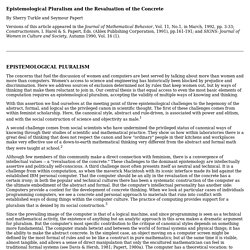 Harel & S. Papert, Eds. (Ablex Publishing Corporation, 1991), pp.161-191; and SIGNS: Journal of Women in Culture and Society, Autumn 1990, Vol. 16 (1). The concerns that fuel the discussion of women and computers are best served by talking about more than women and more than computers. Bricolage-Based Research. For two reasons I was recently very pleased to discover the brilliant Epistemological Pluralism, an article by Sherry Turkle and Seymour Papert (what a team!) 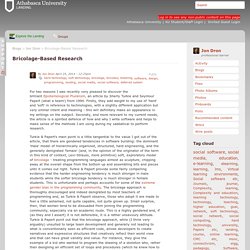 From 1994. Firstly, they add weight to my use of 'hard' and 'soft' in reference to technologies, with a slightly different application but very similar intent and meaning - this will definitely make an appearance in my writings on the subject. Secondly, and more relevant to my current needs, the article is a spirited defence of how and why I write software and helps to make sense of the methods I am using during my sabbatical to perform research. The reason for my scepticism about bricolage being unsuitable for large team development is that the object oriented approach, mentioned by Turkle & Papert but relatively novel and not too widely used at the time, has developed and matured considerably since 1994.

On to the Next Level: Continuing the Conceptualization of the Bricolage. The bricolage offers insight into new forms of rigor and complexity in social research. 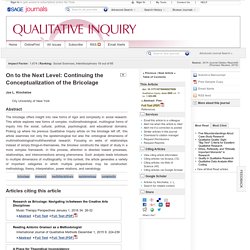 This article explores new forms of complex, multimethodological, multilogical forms of inquiry into the social, cultural, political, psychological, and educational domains. Picking up where his previous Qualitative Inquiry article on the bricolage left off, this article examines not only the epistemological but also the ontological dimensions of multimethodological/multitheoretical research. Bricolage in Organizations. Educational bricolage: Quilts <=> maps <=> rhizomes and the Project ELLA community. Abstract: Lévi-Strauss (1966) used the term bricolage to describe patterns of mythological thought.

Varieties of Bricolage and the Process of Entrepreneurship. Poole College Entrepreneurship Professor Ted Baker Receives Research Impact Award. Dr. Ted Baker, Poole College associate professor of entrepreneurship, and his co-author, Dr. Reed E. Nelson at Southern Illinois University and the Universidade de Sao Paulo, received the award for their paper, “Creating Something from Nothing: Resource Construction through Entrepreneurial Bricolage,” published in Administrative Science Quarterly in 2005. This award is given to researchers who published the most impactful entrepreneurship article six years ago in the top management and entrepreneurship journals. Impact is measured as the number of Social Sciences Citation Index citations received in the five years following publication. Bricolage: Using as Resources That Others Call Worthless Their paper is based on results of a field study of 29 resource-constrained firms that varied dramatically in how they were able to create entrepreneurial businesses by recombining elements at hand for new purposes.

A Bricolage of Critical Hermeneutics Abductive Reasoning and Ac. Inderscienceonline. Photo Of The Week: Reflexivity, quilting and Bricolage. Reflexivity, quilting and Bricolage: arts-based midwifery research In our next ’Photo of the week’ we are looking at research investigating the impact that creative inquiry can have on midwifery and what meanings have emerged through adopting a creative, bricolage methodology. The research is being led by BU’s Dr Jenny Hall. Bricolage: Researching Tomorrow's Topics - Conference. User Responses to New System Implementation: A Bricolage Perspect.