Organisations fighting the good fight, as well as other important stuff for us and the future. 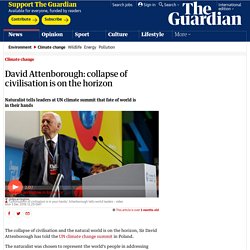 The naturalist was chosen to represent the world’s people in addressing delegates of almost 200 nations who are in Katowice to negotiate how to turn pledges made in the 2015 Paris climate deal into reality. As part of the UN’s people’s seat initiative, messages were gathered from all over the world to inform Attenborough’s address on Monday. “Right now we are facing a manmade disaster of global scale, our greatest threat in thousands of years: climate change,” he said. “If we don’t take action, the collapse of our civilisations and the extinction of much of the natural world is on the horizon.”

“Do you not see what is going on around you?” 1% for the Planet - Homepage. Greenprints – Creating regenerative societies that live within ecological limits. Sustainability and health organisations. There are many sustainability organisations who are now working with the health sector. 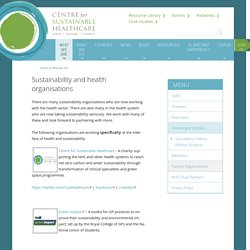 There are also many in the health system who are now taking sustainability seriously. We work with many of these and look forward to partnering with more. The following organisations are working specifically at the interface of health and sustainability: Centre for Sustainable Healthcare - A charity supporting the NHS and other health systems to reach net zero carbon and wider sustainability through transformation of clinical specialties and green space programmes. (link is external) | Facebook (link is external) | LinkedIn (link is external) The Barcelona lifeguards defying Europe to rescue migrants on the open sea. As Europe tries to stop the boats, lifeguards from the calm beaches of Barcelona are stepping in to save lives on the open sea. 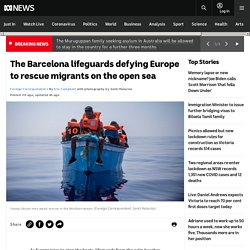 First there's only darkness as we pound across black water. Suddenly, the boat appears, illuminated in the moonlight. International Panel on Behavior Change. Worried about Earth's future? Well, the outlook is worse than even scientists can grasp. Anyone with even a passing interest in the global environment knows all is not well. 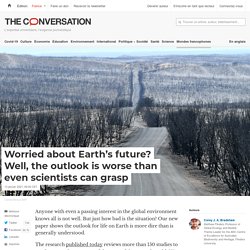 But just how bad is the situation? Our new paper shows the outlook for life on Earth is more dire than is generally understood. The research published today reviews more than 150 studies to produce a stark summary of the state of the natural world. Common Cause Foundation – The Case for Working with Values and Frames. Professor Jem Bendell – Strategist & educator on social & organisational change, now focused on Deep Adaptation. Deep Adaptation Forum. World Transformation Movement.

Sapienship - A world responsive to the most important collective challenges. The Learning Festival. The Great Realisation. Meyne Wyatt - Monologue from City of Gold. YouTube. The great unravelling: 'I never thought I’d live to see the horror of planetary collapse' If you’ve ever been around someone who is dying, it may have struck you how strong a person’s lifeforce really is. 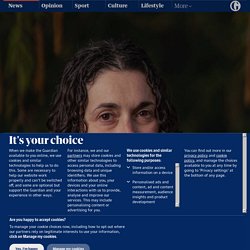 When my dad was gravely ill, an invisible point of no return was gradually crossed, then suddenly death was in plain sight. We stood back helplessly, knowing that nothing more could be done, that something vital had slipped away. The Happy Broadcast. Humans For Survival. Home - Gaia Foundation. Polly Higgins, lawyer who fought for recognition of 'ecocide', dies aged 50. Polly Higgins, one of the most inspiring figures in the green movement, has died aged 50. 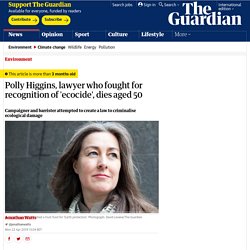 Higgins, a British barrister, led a decade-long campaign for “ecocide” to be recognised as a crime against humanity. She sold her house and gave up a high-paying job so she could dedicate herself to attempting to create a law that would make corporate executives and government ministers criminally liable for the damage they do to ecosystems. Such a legal instrument could be a powerful tool for conservationists, climate campaigners and activists trying to stop air and water pollution, but earlier proposals for this to be included in the Rome statute on international crimes against humanity were dropped in 1996. Ten years ago Higgins set out to revive the idea. She wrote a book, Eradicating Ecocide, lobbied the United Nations law commission, organised mock trials and established a trust fund for “Earth protectors”.

Australian Earth Laws Alliance – Advocates for Earth centred law, governance and ethics. The Ecological Citizen: A peer-reviewed ecocentric journal. A rights revolution for nature. Abstract Introduction of legal rights for nature could protect natural systems from destruction Scientific evidence indicates that the global environmental crisis is accelerating and that environmental laws have not been able to reverse the trend (1). 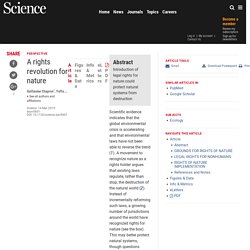 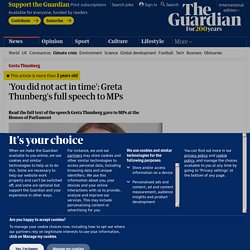 I am 16 years old. I come from Sweden. And I speak on behalf of future generations. The Extinction Rebellion. Greta Thunberg condemns UK's climate stance in speech to MPs. The UK government’s active support for fossil fuels and airport expansion is “beyond absurd”, Greta Thunberg has told MPs. 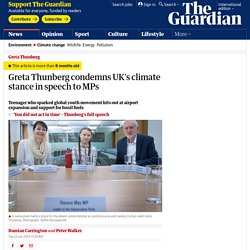 The 16-year-old Swedish student, who sparked a global youth-based movement when she began a “climate strike” outside Sweden’s parliament last year, gave a typically blunt speech. She told MPs: “This ongoing irresponsible behaviour will no doubt be remembered in history as one of the greatest failures of humankind.” Thunberg, who had earlier met the heads of several of the UK’s political parties, also said today’s generation of leaders around the world had not acted fast enough to halt climate change.

“You lied to us. Manifesto for the creation of an Interdisciplinary and international Panel on Behavioral Change or “IPBC” Paul Ehrlich: 'Collapse of civilisation is a near certainty within decades' A shattering collapse of civilisation is a “near certainty” in the next few decades due to humanity’s continuing destruction of the natural world that sustains all life on Earth, according to biologist Prof Paul Ehrlich. 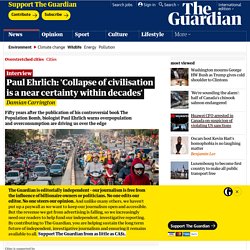 In May, it will be 50 years since the eminent biologist published his most famous and controversial book, The Population Bomb. But Ehrlich remains as outspoken as ever. The world’s optimum population is less than two billion people – 5.6 billion fewer than on the planet today, he argues, and there is an increasing toxification of the entire planet by synthetic chemicals that may be more dangerous to people and wildlife than climate change. Ehrlich also says an unprecedented redistribution of wealth is needed to end the over-consumption of resources, but “the rich who now run the global system – that hold the annual ‘world destroyer’ meetings in Davos – are unlikely to let it happen”.

Greatest Speech Ever Made Charlie Chaplin....The Great Dictator Full HD Best Version. [Best Version] The Great Dictator Speech - Charlie Chaplin + Time - Hans Zimmer (INCEPTION Theme) The Most Honest Three Minutes In Television History. VID 20180214 WA0000. Topics » Thought Maybe. Years Of Living Dangerously. Great Australian Bight Alliance. Centre for Humanitarian Leadership – Committed to developing a new generation in humanitarian leadership. Shumei is a spiritual organization dedicated to elevating the quality of life. Shumei — Natural Agriculture Natural Agriculture stems from the teachings of Mokichi Okada, a Japanese philosopher and farming pioneer who lived in the early years of the 20th century. Responding to the sense of alienation in the modern world, Okada encouraged a reconnection with nature, and a focus on the aspects of life that foster goodwill between people: compassion, respect and love. A cornerstone of his philosophy was the need for humanity to restore its relationship with nature.

By recognizing our interdependence with other living beings, he believed, we would rediscover cooperation and gratitude, the foundations of a peaceful society. Endangered Species Conservation. Oxytocin Changes Everything. What does petting a cat, hugging a friend, deep breathing, a walk in the woods, and giving away money to someone have in common? These are but a few ways to release the hormone of love and connection, Oxytocin. We humans are like puppets on strings.

The puppet-masters are our brain chemicals, the hormones that color our perceptions as well as the way we interact with the world around us. With mindfulness, lifestyle changes, and awareness of this internal process, we can cut the strings and direct our lives with conscious intention. All You Need is Love. S Tree Planting Project. Ecosia. Gardeners sharing seeds & organic garden food. Rachel Beckwith - In memory of 9-year-old girl engaged in charity. Rachel’s Last Fund-Raiser. Perhaps every generation of geezers since Adam and Eve has whined about young people, and today is no different. Isn’t it clear that in contrast to our glorious selves, kids these days are self-absorbed Facebook junkies just a pixel deep? No, actually that’s wrong at every level. Happy Planet Index. NEF HPI BRIEFING WIP. Methods paper 2016. NGOs - Real NGOs, Real Stories, Real Impact. Appropedia. 12 Life Lessons from a Man Who's Seen 12000 Deaths.

Rooted in the hearts of many Hindus is the belief that if you breathe your last in Kashi (Varanasi) you attain what is popularly known as ‘Kashi Labh’ or ‘the fruit of Kashi’—moksh or “release from the cycle of rebirth impelled by the law of karma”. Kashi Labh Mukti Bhawan in Varanasi is one of the three guesthouses in the city where people check in to die. The other two are Mumukshu Bhawan and Ganga Labh Bhawan. Established in 1908, Mukti Bhawan is well-known within the city and outside. Bhairav Nath Shukla has been the Manager of Mukti Bhawan for 44 years.

Yale Environmental Performance Index - 2016 by Yale University. Community-based learning and action. Walk Free - The Movement to End Modern Slavery. Home - Global Gardens of Peace. Remember The Wild. Earth Guardians. Earthwatch: ClimateWatch. ClimateWatch is a national program developed by Earthwatch Australia, the Bureau of Meteorology, and the University of Melbourne to better understand how climate change is affecting our wildlife.

The first project of its kind in the Southern Hemisphere, ClimateWatch enables every Australian to be involved in collecting and recording data that will help shape the country’s scientific response to climate change. Climate change is affecting rainfall and temperature across Australia and is consequently triggering changes in established flowering times, breeding cycles, migration movements, and other phenological changes. ClimateWatch is based on phenology, the study of periodic plant and animal life cycle events and how these are influenced by seasonal and longer-term variations in climate. It's easy to get involved. By becoming a regular ClimateWatcher, you can contribute to the real science of climate change.