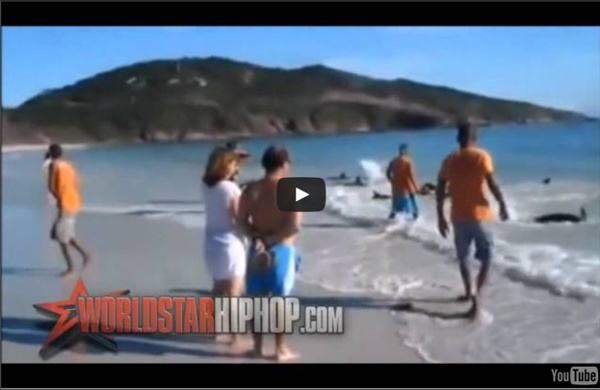 Don’t Blame Mother Nature. | Boomer Warrior (This article by Peter Carter was previously posted on Uprage. Peter is now cross-posting on BoomerWarrior – Editor’s Note.) Public Broadcasting Service PBS (Public Broadcasting Service) is great and just published an article by Rebecca Jacobson about American farmers suffering under this year’s extreme weather and this summer’s severe US drought. But really Rebecca, could you have picked a dumber opening sentence? You can’t blame Mother Nature for these ‘unnatural’ natural disasters. “These are just some of the new normals for farmers around the world”, said Jonathan Foley, director of the Institute for the Environment at the University of Minnesota. We must get this right. A silent video of excellent high-quality images covering the whole terrible spectrum of what was euphemistically being called ‘global environmental change’. Well now we know. Drought Other people are saying we have been hurting Mother Nature and now she’s hitting us back. Merlin Friesen from Filley, Nebraska:

Bees 101 | Honey Bee Haven Bees pollinate a significant majority of the world's food. In North America alone, honey bees pollinate nearly 95 kinds of fruits, including almonds, avocados, cranberries and apples. In fact, we can thank honey bees for one in three bites of food we eat. We all rely on bees – and the pollination services they provide – every day. What’s happening to bees? In recent years, bees have been dying off in droves. In 2006, about two years after this phenomenon hit the U.S., it was named “Colony Collapse Disorder,” or CCD. Much has been made over the "mystery" surrounding CCD, but two points of consensus have emerged: Multiple, interacting causes are in play – key suspects include pathogens, habitat loss and pesticides; andImmune system damage is a critical factor that may be at the root of the disorder. State of the Science PAN's report Honey Bees and Pesticides: State of the Science presents findings from dozens of scientific studies, focusing on the link between pesticides and CCD.

French Nuclear Test Site Mururoa Atoll in Danger of Collapse | Asia Pacific | World By Raiatea Tahana-ReeseEpoch Times Staff Created: August 10, 2012 Last Updated: August 14, 2012 This picture taken in June 2000 shows a landing stage at Fangataufa atoll, French Polynesia, with a board reading in French and Tahitian 'Military zone, entry forbidden'. There have been concerns that part of the Mururoa Atoll could collapse into the sea due to atomic tests from the 1960s to the late 1990s. (Eric Feferberg/AFP/Getty Images) The French government, since 2010, has kept secret that Mururoa Atoll, the site of French nuclear testing in the Pacific, is in danger of collapsing, according to Mururoa e Tatou (MET), the Nuclear Association in French Polynesia. MET President Roland Oldham told ABC’s Radio Australia Pacific Beat program that the issue was detailed in a leaked report from the French Ministry of Defence and should have been made public long ago. A picture taken in 1971 shows a nuclear explosion in Mururoa atoll.

And about time for rights to nature? By Begonia Filgueira It took until 1998 for the UK Parliament to incorporate human rights directly into the domestic legal system. In light of the dangers posed by climate change, is it time to go one step further and grant rights to the Earth herself? Bolivia has done just that – the Mother Earth Rights Law (Ley 071(21 December 2010)) has now come into force. Congratulations to everyone involved in drafting and promoting this law. With Evo Morales’ Party (the Movement Towards Socialism) having a majority in Congress and the Senate, this law passed without much opposition. I will explore the actual text of the law and its practical implications for a country that has both the cultural heritage to support this law and a number of environmental issues arising from its profitable mining industry which can put in peril the very cycles of Mother Earth it wishes to protect. The Law itself The First Article of this law sets out its objective: Mother Earth defined Legal status of the Earth and collective rights

7 car-free cities: Independent of the auto Interested in uplifting stories on the natural world, sustainable communities, simple food, and new thinking on how to live well? Please enter a valid email address and try again! No thanks 6 Natural Disasters That Were Caused by Human Stupidity We like to mark-up natural disasters to everything from The Weather Channel to a large, invisible bearded man who hangs out on clouds and doesn't wear pants (the ghost of Ernest Hemingway). And while these things may be true, there's no avoiding the fact that we ourselves are responsible for many of the planet-murdering buttfucks that befall our delicate population. The Draining of Lake Peigneur The Disaster In carpentry there's a saying: "Measure twice, cut once." "If there's not a hole in the ground by the time I finish this pipe, someone's getting a mustache headbutt." In 1980, a Texaco oil rig was drilling for petroleum at Lake Peigneur, a Louisiana lake that sits directly on top of a salt mine, and has an average depth of six feet. At first the water simply trickled down below. Fortunately no workers were killed by the whirlpool. Probably something like this. The Boston Molassacre The life of a construction worker at a molasses factory is a difficult one. "Get it? The Disaster:

5 Seemingly Innocent Ways You've Screwed The World Today Yes, hippies, we know that we can "save the world" by merely giving up all of the things that make modern life worth living. Thanks for reminding us that we can save lots of greenhouse gases by simply walking the 13 miles to work in the middle of the damned summer. We'll get right on that. Though to be fair, a huge chunk of the damage we're doing to the world is due to things you probably didn't even know you were doing. #5. Most of us have a weird double standard when it comes to using or wasting electricity. Getty"I like to eat a baked chicken every hour, on the hour." But everything from your computer to your TV to your Blu-ray player does something equally crazy, and they're probably doing it right now. The Horrible Downside: Two words: Vampire energy. Not to be confused with its mortal foe, werewolf energy. But honestly, how much power can that really be? GettyWith all the extra seconds you save not unplugging things, you'll be able to write an extra six Facebook messages per year! #4.

Biodiversity: Keep fighting the good fight - opinion - 05 September 2013 IT IS easy to become fatalistic about environmental problems. The destruction of the natural world continues apace and seems unstoppable. Many people actively avoid environmental news, because it only makes them feel guilty and powerless. But there is no reason to despair. A recent analysis suggests that while the loss of biodiversity is undoubtedly serious, it is far from unstoppable (see "Stop global warming and save biodiversity? What would it take? Inaction won't get us there. People who care about the natural world have every reason to keep on fighting. This article appeared in print under the headline "It's not too late for nature" New Scientist Not just a website! More From New Scientist Evolution: 24 myths and misconceptions (New Scientist) Flesh-eating sponges are beautiful but deadly (New Scientist) Why our brains work better with age (New Scientist) Asphalt may have poisoned ancient Americans (New Scientist) More from the web Alberta Forces Families to Recycle: Is It Wasted Effort?

Fracking chemical leak kills threatened fish - environment - 04 September 2013 A THREATENED fish has been fracked to within an inch of its life. Chemicals used in the controversial extraction process spilled into a river in 2007, killing off the local population of the vulnerable blackside dace. Fracking is a way of extracting natural gas by pumping a cocktail of chemicals underground to crack open shale rock, releasing the gas trapped within. One of the reasons it is controversial is because of concerns that the chemicals might contaminate drinking water, although the evidence for this is weak. In all the kerfuffle, little attention has been paid to fracking's effects on ecosystems. Yet, in May and June 2007, fracking chemicals leaked into a 2-kilometre stretch of Acorn Fork Creek in Kentucky. "This may be the first report of effects on aquatic biota," says Diana Papoulias of the US Geological Survey, who investigated the incident with Anthony Velasco of the US Fish and Wildlife Service in Frankfort, Kentucky. More From New Scientist What's war good for?