Donald Trump’s Nose Is Growing Longer and Longer. Bernie Sanders Wants to Be President, but He’s Already Facebook Royalty. Photo WASHINGTON — The quotations he posts, rarely pithy, are often sayings he thinks up in the shower. 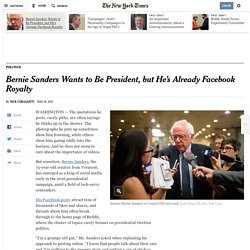 The photographs he puts up sometimes show him frowning, while others show him gazing oddly into the horizon. And he does not seem to care about the importance of videos. Midterm Myths, Emotional Algorithms, and More. Reporter James Pindell: Missing in action. How Facebook is wrecking political news. By Aaron Sankin on October 19th, 2014 It’s almost impossible to overstate how important Facebook is to online news sites, which live and die at the whims of the social network’s algorithm. 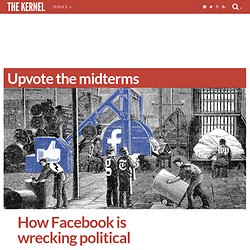 With the 2014 midterm elections racing to the Nov. 4 finish line, however, this imbalance of power has become downright dangerous. The Kernel’s publisher, the Daily Dot, regularly gets over half of its daily traffic from Facebook. No other social network even comes close—not Twitter, not Tumblr, and especially not Ello. It would be a shock if other sites putting out news or entertainment stories had traffic figures that looked substantially different. GOP digital revamp sees mixed results two years after report. WASHINGTON – The most important thing that Republicans did over the past two years to improve their data and technology came at the end of August. 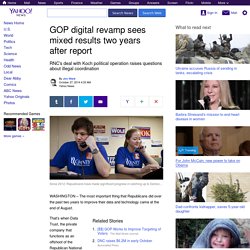 That’s when Data Trust, the private company that functions as an offshoot of the Republican National Committee, announced that it would begin sharing information from its voter file with i360, the entity created by the Koch brothers to house its own voter file and data analytics tools. For the first time ever, the two biggest voter-file-gathering operations on the right would be working together.

They would remain independent of each other, but benefit from the information-gathering work of each other's volunteers. The data flows would go both ways, and the RNC would for the first time have access to the outside groups' data. “It’s exactly what we needed to do,” said Gerrit Lansing, digital director at the National Congressional Campaign Committee. The news magazine for high school.

1960: The First Mass Media Election the new medium of television played a decisive role in The race between John F. 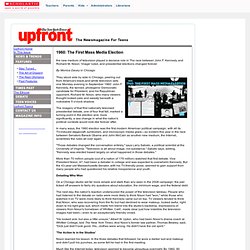 Kennedy and Richard M. Nixon: 'image' ruled, and presidential elections changed forever By Monica Davey in Chicago They stood side by side in Chicago, peering out from America's black-and-white television sets one Monday evening in September 1960: John F. Campaign of 1960. Despite his youth, 43-year-old John F. 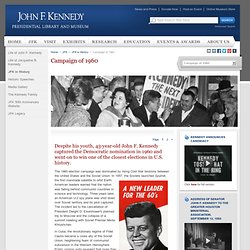 Kennedy captured the Democratic nomination in 1960 and went on to win one of the closest elections in U.S. history. The 1960 election campaign was dominated by rising Cold War tensions between the United States and the Soviet Union. In 1957, the Soviets launched Sputnik, the first manmade satellite to orbit Earth. American leaders warned that the nation was falling behind communist countries in science and technology.

In Cuba, the revolutionary regime of Fidel Castro became a close ally of the Soviet Union, heightening fears of communist subversion in the Western Hemisphere. How the Nixon-Kennedy Debate Changed the World. On the morning of September 26, 1960, John F. 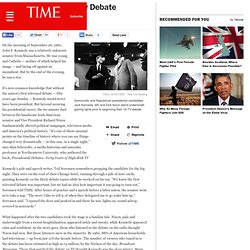 Kennedy was a relatively unknown senator from Massachusetts. He was young and Catholic — neither of which helped his image — and facing off against an incumbent. The Kennedy-Nixon Debates - U.S. Presidents. Politics 101 BC: Cleon Argues Against Flip-Flopping. Waffling. 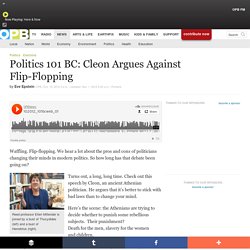 The Frank Luntz script for Congressional Republicans. In advance of a House Republican retreat this week, wordsmith Frank Luntz again offered his recipe for GOP political success, this time in a Washington Post Outlook piece on Friday. 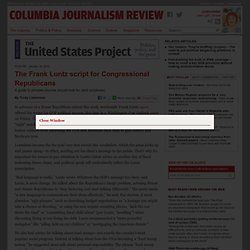 For the last two decades, politicians have taken Luntz’s advice for using the “right” words to frame the conversation—how to best talk about a whole bunch of hot button subjects from reforming the FDA and Medicare back then to gun control and Medicare now. Luntzisms become the the pols’ very best sound-bite vocabulary, which the press picks up and passes along—in effect, sending out his client’s message to the public. That’s why it’s important for jounos to pay attention to Luntz’s latest advice as another day of fiscal reckoning draws closer, and political speak will undoubtedly reflect the Luntz prescription. “Bad language is costly,” Luntz wrote.

Obama's Media Problem. Media in Election Campaigns — Politics 101 BC: Cleon Argues Against Flip-Flopping. The Agony of Frank Luntz. Elections and Campaigns. Wide Partisan Differences Over the Issues That Matter in 2014 Republican and Democratic voters are split not only over their candidate preferences, but also about the importance of key issues in the election. 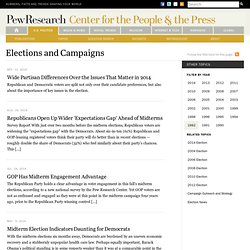 Republicans Open Up Wider ‘Expectations Gap’ Ahead of Midterms Survey Report With just over two months before the midterm elections, Republican voters are widening the “expectations gap” with the Democrats. About six-in-ten (61%) Republican and GOP-leaning registered voters think their party will do better than in recent elections — roughly double the share of Democrats (32%) who feel similarly about their party’s chances. 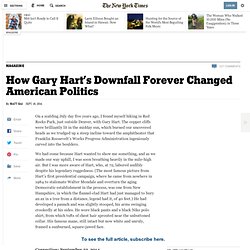 The copper cliffs were brilliantly lit in the midday sun, which burned our uncovered heads as we trudged up a steep incline toward the amphitheater that Franklin Roosevelt’s Works Progress Administration ingeniously carved into the boulders. We had come because Hart wanted to show me something, and as we made our way uphill, I was soon breathing heavily in the mile-high air. But I was more aware of Hart, who, at 72, labored audibly despite his legendary ruggedness. Gary Hart, the Elusive Front-Runner. Photo This article appeared in print on May 3, 1987, and is revisited in Matt Bai’s cover story in the September 21, 2014, issue of the magazine. “Please,” said the frustrated politician on the other side of the Formica breakfast table in a New Hampshire hotel, “keep your mind open to the possibility that I’m not weird.”

Gary Warren Hart was doing something he doesn’t like to do: he was talking about himself, his childhood, his parents, his religious beliefs, his marriage. It was an infuriating experience for Hart, the leading Democratic Presidential candidate, because his psyche has been probed more often and more deeply than that of any other contender. Our Story About What the Media Said About What Karl Rove Said About Hillary Clinton’s Health. Thirty days in the hospital. Spin (1995 film) Spin is a 1995 documentary film by Brian Springer composed of raw satellite feeds featuring politicians' pre-appearance planning. It covers, not only the presidential election, but also the 1992 Los Angeles riots as well as the Operation Rescue abortion protests.[1] Using the 1992 presidential election as his springboard, Springer captures the behind-the-scenes maneuverings of politicians and newscasters in the early 1990s. Pat Robertson banters about "homos," Al Gore learns how to avoid abortion questions, George H.

W. Bush talks to Larry King about Halcion -- all presuming they're off camera. One-in-Five Registered Voters Talk About How They Voted on Social Media. Romney and Obama Campaigns Leaking Web Site Visitor Data. Some pages titles on Mitt Romney’s campaign site included a user’s name, giving third parties the opportunity to collect identifying data. The presidential campaign sites BarackObama.com and MittRomney.com have recently ratcheted up their use of third-party Web trackers.

These are companies, like ad networks and data brokers working on behalf of the campaigns, that collect information about users’ online activities to show political ads to people tailored to their own interests and beliefs. Spokesmen for each campaign have separately said that their own campaign had put safeguards in place to protect that user data, as Charles Duhigg and I reported in an article published in The New York Times on Oct. 28.

But now a new study by Jonathan Mayer, a graduate student in computer science and law at Stanford University, reports that both sites are leaking information about site visitors to a number of third-party trackers operating on their pages. On the Romney site, Mr. Republicans Embrace Twitter Hard for ’12.

Campaign Ads. Campaigns Mine Personal Lives to Get Out Vote. In the weeks before Election Day, millions of voters will hear from callers with surprisingly detailed knowledge of their lives. These callers — friends of friends or long-lost work colleagues — will identify themselves as volunteers for the campaigns or independent political groups.

The callers will be guided by scripts and call lists compiled by people — or computers — with access to details like whether voters may have visited pornography Web sites, have homes in foreclosure, are more prone to drink Michelob Ultra than Corona or have gay friends or enjoy expensive vacations. The callers are likely to ask detailed questions about how the voters plan to spend Election Day, according to professionals with both presidential campaigns. Can Data Mining Win a Presidential Campaign? The Republicans and Democrats are betting big on data analytics in this current election cycle. According to the Associated Press, Mitt Romney’s campaign has contracted consumer-analytics firm Buxton Co. to drill deep into consumer data, with the aim of digging up “wealthy and previously untapped” donors.

(Romney digital director Zac Moffatt told political Website Politico as far back as June that the Romney campaign would “outsource” its data analytics rather than develop the necessary infrastructure in-house.) The Romney data-crunching project apparently relies on “thousands of commercially available, expensive databases” which contain everything from charitable contributions to survey responses.