For a sustainable and desirable future 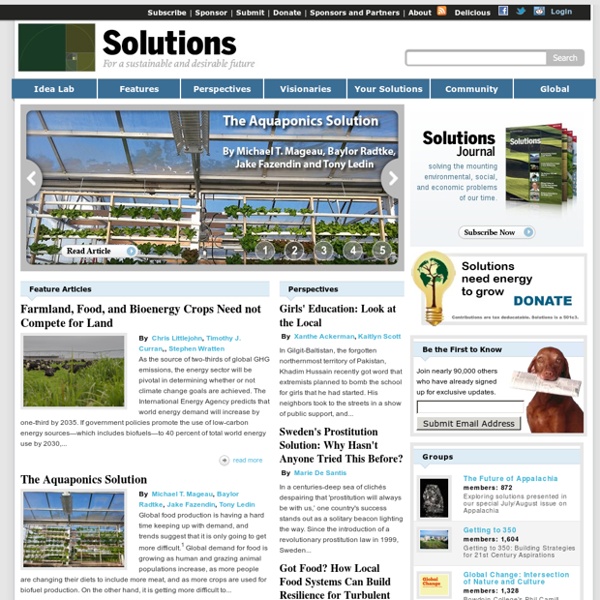 -New HOme Project « Leifur Thor’s WorldPress Station Imagine a home that provides a level of comfort and ease of living beyond what’s known. Now imagine this home uses less energy while providing that superior standard of living. In this century, wouldn’t we rather have a home that harvests energy quietly instead of using it? An enclosed space three average people with no special skills can assemble noise free, and with no special building tools in three weeks from start to finish.

MIT Researchers Use Legos To Solve Real-Life Problems CAMBRIDGE (CBS) – From the blockbuster movie, to the new Legoland Discovery Center opening in Somerville at the end of the month, the old school children’s toy is a modern day hit. Across the river in Cambridge, there is evidence that Legos are also a hit with researchers. It turns out, the brainiest of the brainiacs at MIT are also Legomaniacs. Ira Winder is a researcher and project manager of CityScience at the MIT Media Lab. He’s using Legos to study the “walkability” of a city. GEO - Group on Earth Observations Global geospatial community to convene in Geneva on May 5-9 Geospatial Media and Communications, in partnership with the Group on Earth Observations (GEO) and SwissTopo, will host the Geospatial World Forum on 5-9 May 2014 in Geneva. The conference will convene representatives of the geospatial commercial sector and government/policy end users. A program titled, "Geospatial Industry Forging Ties with GEOSS" will be held on Monday, 5 May, and the GEO Appathon 2014 will kick off on Wednesday, 7 May. Find more information here.

Earth Day from Space There are many ways to celebrate Earth Day, from sustainability efforts (and check out our new blog, Guilty Planet) to simply appreciating nature. And while this is a beautiful shot of Forest Park right here in Portland, it doesn’t compare — in my eyes — to the perfection of Earth as seen from so far away. In October of 1946, a V-2 missile was launched from New Mexico, straight up into the air. And at its maximum height of 65 miles (just barely into what was then considered outer space), it snapped the first photographs of the Earth from Space. (And you can click every image on this page to enlarge it.) It wasn’t until Apollo 8, 22 years later, that the first color photograph of Earth was taken.

Worthwhile Canadian Initiative This is speculative. I don't know whether it works empirically. Or, I should say, I don't know how much it works empirically. The effect I am talking about here might be large, and explain almost everything. Or it might be small, and explain almost nothing. The New Geopolitics of Food - By Lester R. Brown In the United States, when world wheat prices rise by 75 percent, as they have over the last year, it means the difference between a $2 loaf of bread and a loaf costing maybe $2.10. If, however, you live in New Delhi, those skyrocketing costs really matter: A doubling in the world price of wheat actually means that the wheat you carry home from the market to hand-grind into flour for chapatis costs twice as much. And the same is true with rice. If the world price of rice doubles, so does the price of rice in your neighborhood market in Jakarta.

7 car-free cities: Independent of the auto Interested in uplifting stories on the natural world, sustainable communities, simple food, and new thinking on how to live well? Please enter a valid email address and try again! No thanks The 15 Rules of Web Disruption How to Spot – and Defeat – Disruption on the Internet David Martin’s Thirteen Rules for Truth Suppression, H. Michael Sweeney’s 25 Rules of Disinformation (and now Brandon Smith’s Disinformation: How It Works) are classic lessons on how to spot disruption and disinformation tactics. We’ve seen a number of tactics come and go over the years.