U.S. charges former Air Force officer with spying for Iran. The Student and the Spy: How One Man’s Life Was Changed by the Cambridge Five. Like any good spy story, it started with cocktails. 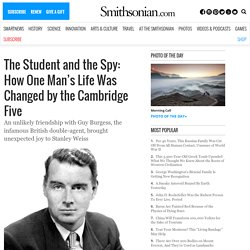 Stanley Weiss first encountered Guy Burgess drinking in the lounge aboard the RMS Caronia in the summer of 1950. Weiss was returning to America after several years in Europe; Burgess was moving there as a British diplomat. Over the course of the journey and in the months that followed, the men became friends. Weiss was astounded by Burgess’s skills as a conversationalist, his easy charisma and his connections to the world’s most important people.

Russia DNC Hack - Proof Russia Was Behind the DNC Email Hack. Robbing the NSA, of course, is not easy. 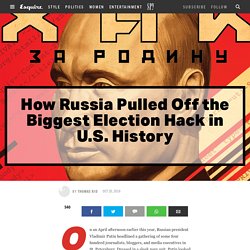 The agency's elite hacking unit, called Tailored Access Operations, has an internal network known as the "high side" that is physically segregated from the Internet (the "low side"). Data diodes, devices that allow data to flow one way only, like water from a faucet, make it nearly impossible to hack high-side computers from the low side. The Epic Honey Trap: A Classic Case Shows Just How Far Moscow Will Go. The French ambassador looked like an easy target, but 100 operatives were called on to get him laid, and get him recruited. 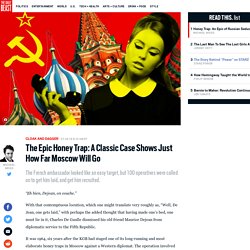 “Eh bien, Dejean, on couche.” With that contemptuous locution, which one might translate very roughly as, “Well, De Jean, one gets laid,” with perhaps the added thought that having made one’s bed, one must lie in it, Charles De Gaulle dismissed his old friend Maurice Dejean from diplomatic service to the Fifth Republic. It was 1964, six years after the KGB had staged one of its long-running and most elaborate honey traps in Moscow against a Western diplomat. How to explain the KGB’s amazing success identifying CIA agents in the field? As the Cold War drew to a close with the fall of the Berlin Wall in November 1989, those at CIA headquarters in Langley, Virginia, finally hoped to resolve many long-standing puzzles. 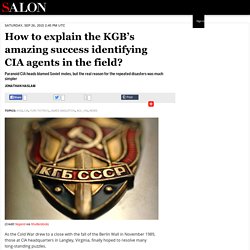 The most important of which was how officers in the field under diplomatic and deep cover stationed across the globe were readily identified by the KGB. As a consequence, covert operations had to be aborted as local agents were pinpointed and CIA personnel compromised or, indeed, had their lives thrown into jeopardy. The problem dated from the mid-’70s, the very time that James Angleton, the paranoid head of agency counterintelligence, was at last ushered out of office, to the relief of conscientious officers hitherto cast under a dark cloud of suspicion, their promotion delayed or, worse still, denied, and in some cases entire careers wrecked. But could Angleton have been right? Some consistently maintained so, notably the late Bruce Bagley. C.I.A. Is Said to Have Bought and Destroyed Iraqi Chemical Weapons.

Photo The Central Intelligence Agency, working with American troops during the occupation of Iraq, repeatedly purchased nerve-agent rockets from a secretive Iraqi seller, part of a previously undisclosed effort to ensure that old chemical weapons remaining in Iraq did not fall into the hands of terrorists or militant groups, according to current and former American officials. 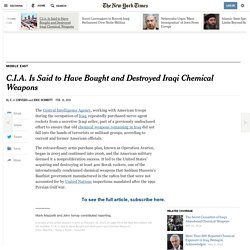 The extraordinary arms purchase plan, known as Operation Avarice, began in 2005 and continued into 2006, and the American military deemed it a nonproliferation success. It led to the United States’ acquiring and destroying at least 400 Borak rockets, one of the internationally condemned chemical weapons that Saddam Hussein’s Baathist government manufactured in the 1980s but that were not accounted for by United Nations inspections mandated after the 1991 Persian Gulf war. Continue reading the main story Chemical weapons recovered monthly Weapons bought Earlier recoveries Retired Army Lt. Studies in Intelligence: New Articles from The CIA's In-House Journal. 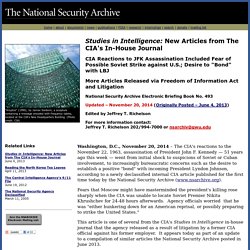 Kennedy — 51 years ago this week — went from initial shock to suspicions of Soviet or Cuban involvement, to increasingly bureaucratic concerns such as the desire to establish a positive "bond" with incoming President Lyndon Johnson, according to a newly declassified internal CIA article published for the first time today by the National Security Archive (www.nsarchive.org). Fears that Moscow might have masterminded the president's killing rose sharply when the CIA was unable to locate Soviet Premier Nikita Khrushchev for 24-48 hours afterwards.

Agency officials worried that he was "either hunkering down for an American reprisal, or possibly preparing to strike the United States. " Intelligence Gap: How a Chinese National Gained Access to Arizona’s Terror Center. Lizhong Fan’s desk was among a crowd of cubicles at the Arizona Counter Terrorism Information Center in Phoenix. 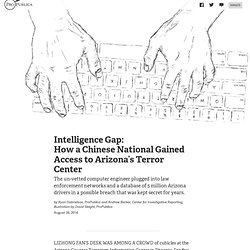 For five months in 2007, the Chinese national and computer programmer opened his laptop and enjoyed access to a wide range of sensitive information, including the Arizona driver’s license database, other law enforcement databases, and potentially a roster of intelligence analysts and investigators. The facility had been set up by state and local authorities in the aftermath of the 9/11 terror attacks, and so, out of concerns about security, Fan had been assigned a team of minders to watch him nearly every moment inside the center.

Fan, hired as a contract employee specializing in facial recognition technology, was even accompanied to the bathroom. However, no one stood in Fan’s way when he packed his equipment one day in early June 2007, then returned home to Beijing. Under Arizona law, then-Gov. To this day, they have not. “That really is outrageous,” Longman said. Col. All about The Cambridge Spies, by Russell Aiuto — Cambridge Spies. That Time The CIA And Howard Hughes Tried To Steal A Soviet Submarine. How One Chinese Corporate Spy Dodged the FBI to Steal Inbred Corn Seeds from Iowa. How the 1950s Soviet Espionage of Burgess and MacLean Sparked the Korean War. In 1951, two British diplomats, Guy Burgess and Donald MacLean, disappeared. 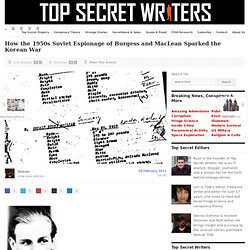 Their whereabouts were unknown for nearly five years, but it is speculated that they received inside information concerning their impending arrest for espionage. The two men resurfaced nearly five years later in Moscow, proving British Intelligence was correct about Burgess’ and MacLean’s espionage activities. During the 1940′s, Burgess and MacLean relayed a steady stream of information on Western policy to Moscow, including the West’s intentions on the Marshall Plan – an American plan to rebuild and create a stronger economy for the European countries after world War II. The Soviets were offered to participate, but declined. However, it appears that Burgess and MacLean’s participation in the Russian spy game predates the 1940s by some time.

It also appears that Burgess and MacLean did much more than just deliver information. Fascinating Spy Gadgets of the Former Soviet Union. During the height of the Cold War, spying was in full swing. 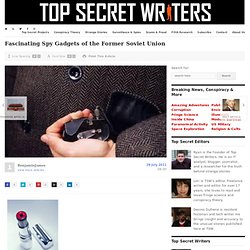 However, the KGB spies of days gone by didn’t have access to the type of technology we have today. Here are a few of the fascinating spy gadgets the Former Soviet Union used to gather intelligence. 1. The Lipstick Pistol This 4.5mm pistol came disguised as a tube of lipstick. The pistol at the Boghardt Spy Museum was reportedly taken from a spy in the 1960s. 2. While “Get Smart” may have made the shoe phone famous, Russian allies came up with a clever plan to transmit intelligence from Western diplomats. 3. A secret agent from Bulgaria once used an umbrella to kill a dissident on the streets of London in 1978. 4. Five Popular Espionage Techniques of the Former Soviet Union. The art of spying has been used for centuries and is still used today. 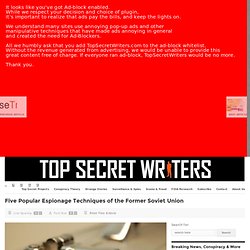 This form of intelligence gathering is a staple of any government; and, no government perfected this art better than the former Soviet Union. The Soviets came up with ingenious ways to steal and pass secrets from their opposing governments. The most common targets were the U.K, France, Italy and Germany. Former KGB Agent Reveals Soviets Suspected UFOs were American Surveillance Technology. It is no secret that the former Soviet Union had a tad of a fascination with UFOs, approaching the subject with the utmost earnestness and attention to detail. As Boris Sokolov, a retired Russian colonel who ran a study on UFOs in the 1980s once said: “For 10 years the entire Soviet Union became one gigantic UFO listening post.” (1) How Hezbollah Trained an Operative to Spy on Israeli Tourists. In a report to be published by a West Point think tank next week, a former U.S. counterterror official argues that the Cyprus case and an attack on Israelis in Bulgaria last year show that Hezbollah has returned to aggressive operations on European soil.

Western counterterror agencies largely share that analysis, which has spurred a proposal by Britain for the European Union to designate Hezbollah’s military wing as a terrorist organization. “In Cyprus you have a case that underwent full judicial scrutiny, and a conviction in a European court,” said Matthew Levitt, the report’s author, a former top Treasury Department intelligence official who is now a senior fellow at the Washington Institute for Near East Policy. “You have all this evidence. You have a European Hezbollah operative who was also doing courier work across Europe. The Jonathan Pollard Spy Case: The CIA's 1987 Damage Assessment Declassified.

Washington, DC, December 14, 2012 – When Naval Investigative Service analyst Jonathan Pollard spied for Israel in 1984 and 1985, his Israeli handlers asked primarily for nuclear, military and technical information on the Arab states, Pakistan, and the Soviet Union – not on the United States – according to the newly-declassified CIA 1987 damage assessment of the Pollard case, published today by the National Security Archive at George Washington University (www.nsarchive.org).

The damage assessment includes new details on the specific subjects and documents sought by Pollard's Israeli handlers (pages 36-43), such as Syrian drones and central communications, Egyptian missile programs, and Soviet air defenses. The Israelis specifically asked for a signals intelligence manual that they needed to listen in on Soviet advisers in Syria.

The document describes how Pollard's handler, Joseph Yagur, told him to ignore a request, from Yagur's boss, for U.S.