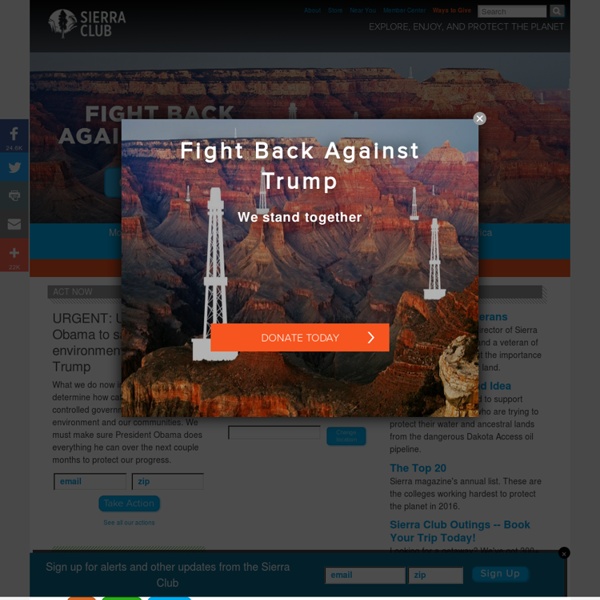 EARTHWORKS Earthworks' Mission Earthworks is a nonprofit organization dedicated to protecting communities and the environment from the adverse impacts of mineral and energy development while promoting sustainable solutions. Earthworks stands for clean air, water and land, healthy communities, and corporate accountability. We work for solutions that protect both the Earth’s resources and our communities. How We Work Africa Blog In just three months, Benin has made rapid progress in delivering its “Cotonou Consensus” action plan on agriculture. At ONE, we say “well done!”, this is the profile of a champion! 19 of Africa’s hottest recording artists have come together to record a new track, ‘Cocoa ‘na Chocolate’ exclusively for ONE.org.

Nothing found for 2008 06 09 Rotating-wind-powered-tower-to-begin-construction-in-dubai Dubai has garnered much attention in recent years with a never-ending supply of architectural wonders being built, or proposed, at a head spinning pace. Mostly these towering structures are grand and tall, but some are also green. We’ve covered many an ambitious Dubai skyscraper scheme here at Inhabitat, including David Fisher’s Rotating Tower, but there is new news from Fisher’s Dynamic Architecture firm. This self-sufficient, sun and wind powered design is making headlines once again as the Italian-Israeli architect has just unveiled the latest design for his twirling tower, and construction is set to begin this month!

American Academy of Pediatrics Cuts Ties with Monsanto Months ago Mamavation learned that the American Academy of Pediatrics was in a sponsorship relationship with Monsanto, a chemical company and makers of DDT, PCBs, Agent Orange, glyphosate & GMOs. In fact, Monsanto has been deemed the 3rd most hated company in the United States by the Harris Poll this year measuring “reputation quotient” which basically means how people feel about them. Baffled by this relationship, Mamavation founder Leah Segedie contacted the AAP through a close friend and colleague and was put in touch with their Public Affairs team. “I was completely shocked that the American Academy of Pediatrics, an organization that moms put their trust in at some of the most vulnerable times in their lives was associating with a company that didn’t elicit trust at all. I knew this association was potentially damaging to the AAP and that Monsanto was getting far more out of it than pediatricians ever would.

In Your State To view national service programs in your state, please click on the map or select from the box on the right. CNCS State Offices and State Service Commissions The Corporation for National and Community Service (CNCS) supports collaboration among national, state, and local entities.

Biology & Marine Biology: UNCW The Department of Biology and Marine Biology offers a program of study and research leading to the doctor of philosophy in marine biology. The program provides students with a broad background and overview of the fields comprising marine biology and make use of the diverse interests of the marine biology faculty within the department. As is generally the case, the Ph.D. program is primarily a research degree. As such, it is intended to serve students with interests in conducting research in academia, industry, and government along with those who intend to become faculty in undergraduate teaching institutions, managers in technology-based industries and policy makers in government.

12 Life Lessons from a Man Who's Seen 12000 Deaths Rooted in the hearts of many Hindus is the belief that if you breathe your last in Kashi (Varanasi) you attain what is popularly known as ‘Kashi Labh’ or ‘the fruit of Kashi’—moksh or “release from the cycle of rebirth impelled by the law of karma”. Kashi Labh Mukti Bhawan in Varanasi is one of the three guesthouses in the city where people check in to die. The other two are Mumukshu Bhawan and Ganga Labh Bhawan. What's New in Lightroom 3 beta Share this Episode Autoplay End of Video These Massive Extinct Eagles Could Have Carried Off That Toddler's Dad Last night, a video supposedly showing a golden eagle swooping down to pluck a toddler from a Montreal park--it was unsuccessful, luckily--hit the internet. Great video! This morning, avian experts both amateur and professional began weighing in, saying the video was doctored, that the bird in question was not actually a golden eagle, that the bird's behavior is unusual and that, all in all, it's probably fake. So, yes, perhaps a golden eagle didn't attempt to grab a Quebecois baby.

Oxytocin Changes Everything What does petting a cat, hugging a friend, deep breathing, a walk in the woods, and giving away money to someone have in common? These are but a few ways to release the hormone of love and connection, Oxytocin. We humans are like puppets on strings. The puppet-masters are our brain chemicals, the hormones that color our perceptions as well as the way we interact with the world around us.

Comparing Hurricane Disasters: Sandy vs. Katrina Comparing Disasters: Sandy vs. Katrina from The Huffington Post does a good job of clearly walking through the data to put the two mega-storm hurricanes into perspective. Designed by Tim Wallace and Jaweed Kaleem, Rachel’s Last Fund-Raiser Perhaps every generation of geezers since Adam and Eve has whined about young people, and today is no different. Isn’t it clear that in contrast to our glorious selves, kids these days are self-absorbed Facebook junkies just a pixel deep? No, actually that’s wrong at every level. This has been a depressing time to watch today’s “adults,” whose talent for self-absorption and political paralysis makes it difficult to solve big problems. But many young people haven’t yet learned to be cynical.

Shumei is a spiritual organization dedicated to elevating the quality of life Shumei — Natural Agriculture Natural Agriculture stems from the teachings of Mokichi Okada, a Japanese philosopher and farming pioneer who lived in the early years of the 20th century. Responding to the sense of alienation in the modern world, Okada encouraged a reconnection with nature, and a focus on the aspects of life that foster goodwill between people: compassion, respect and love.