YouTube. Underground Farm Produces 2 Tons Of Food A Month. Onward: Underground Farming in a London Bomb Shelter. Earthshot Prize. Big Compost Experiment. SEAQUAL INITIATIVE - Together for a Clean Ocean. How To Make Vegan Food For Your Dog. China's War On Waste. Climate change: a cry from the future. Global Climate Strike → Sep. 20–27. ‘Snowglow’ Sounds Charming, But It’s a Menace to Night Skies. One December evening, Andreas Jechow’s wife, Konny, looked out their window in Ludwigsfelde, Germany, a suburb about 15 miles south of Berlin. 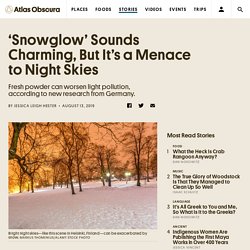 Although it was nighttime, the landscape was bathed in light. In fact, it was bright enough that she wanted to venture outside and build a snowman. Texas’s Gulf Coast Is Being Battered by ‘Nurdle’ Pollution. This story was originally published by Undark and appears here as part of the Climate Desk collaboration. 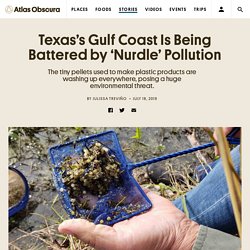 Last September, Jace Tunnell discovered a layer of tiny, round plastic pellets covering a beach on Padre Island off the southern coast of Texas. Climate Change Has Claimed Its First Icelandic Glacier. Okjökull, better known as 'Ok,' Glacier has melted, thanks to climate change and scientists warn that this is just the beginning of a grim future for Iceland's ~400 glaciers—and us if climate patterns continue melting ice caps and glaciers.An Icelandic author has written a eulogy on a memorial plaque for the lost glacier and plan to place it atop Okjökull Mountain on August 18, 2019. 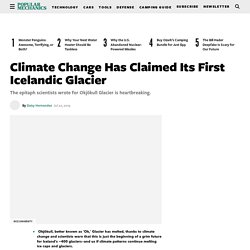 The latest climate change victim is Okjökull, more commonly known as 'Ok,' an Icelandic glacier which scientists from Iceland and Rice University in Houston will memorialize in August with a heartbreaking plaque reading: "Ok is the first Icelandic glacier to lose its status as a glacier. In the next 200 years all our glaciers are expected to follow the same path. Sowing the seeds of Resistance. Each one of us is interlinked with other human beings, but also with all other living things in the world. 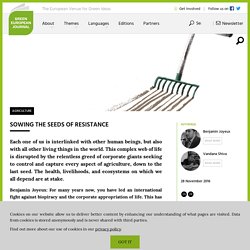 Seeds of Resistance - book by Mark Schapiro. Plant-Based and Clean Meat Innovation - The Good Food Institute. Earthjustice: Environmental Law: Because the Earth Needs a Good Lawyer. 4ocean is Actively Cleaning our Oceans and Coastlines. Environmentalism in the 1960s and 1970s.

Rise for Bayelsa - Learn more of Bayelsa and her people. Tree Update Episode 16. The Swedish teen inspiring climate strikes. Youngclimatewarriors. What It Takes to Make a Brand New Island - Waterstudio. Wildflowers Are the Best Pesticide. By Dr. 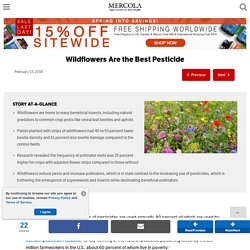 Mercola In the U.S., about 1 billion pounds of pesticides are used annually, 90 percent of which are used by the agricultural sector.1 There are many problems with the indiscriminate use of these toxic chemicals, like the fact that 82 percent of domestic fruits and 62 percent of domestic vegetables contain pesticide residues,2 to say nothing of the risks of pesticide poisoning faced by the 2.5 million farmworkers in the U.S., about 60 percent of whom live in poverty.3. REPORT: 16 Year Old Swedish Climate Activist Greta Thunberg Nominated for Nobel Peace Prize.

Shrinking Swiss glacier hosts world's largest postcard. When Cactus Destruction Is Imminent, These Rescuers Come Running. Kevin McCabe Cob Building Specialist. System 001: An Innovative Design to Remove Plastic From the Ocean has Been Deployed off the Coast of California. These kids and young adults want their day in court on climate change. Humanity must rapidly decrease greenhouse gas emissions to avoid catastrophic levels of global warming, climate scientists have warned for decades. 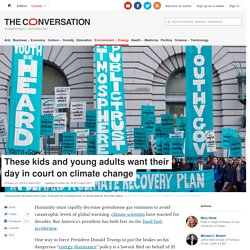 But America’s president has both feet on the fossil fuel accelerator. One way to force President Donald Trump to put the brakes on his dangerous “energy-dominance” policy is a lawsuit filed on behalf of 21 young people. You Make The Difference. eXXpedition – all female crew sail across the Seas to raise awareness of toxics! Kids Against Plastic. Want to fight climate change? Educate a girl. Daiana Ruiz If I asked you to name one of the most effective ways to combat climate change, what would your answer be? 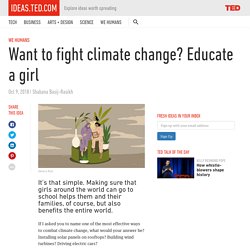 Installing solar panels on rooftops? Building wind turbines? Driving electric cars? UNDER WATER How rising waters cost us all. Until now, scientists have often framed climate change in terms of the future. 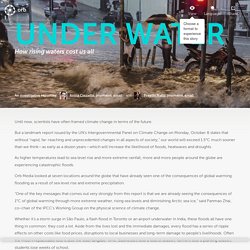 But a landmark report issued by the UN’s Intergovernmental Panel on Climate Change on Monday, October 8 states that without "rapid, far-reaching and unprecedented changes in all aspects of society,” our world will exceed 1.5°C much sooner than we think—as early as a dozen years—which will increase the likelihood of floods, heatwaves and droughts. As higher temperatures lead to sea level rise and more extreme rainfall, more and more people around the globe are experiencing catastrophic floods. Orb Media looked at seven locations around the globe that have already seen one of the consequences of global warming: flooding as a result of sea level rise and extreme precipitation.

CAIT Climate Data Explorer. All of the world’s greenhouse gas emissions in one awesome interactive pie chart. The United Nations' Paris climate talks are less than six months away, and have been widely described as our best chance for an international agreement to curb the effects of global climate change. 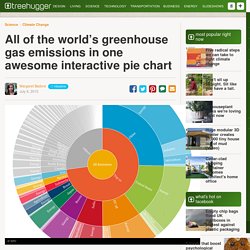 In order to reach that goal, we need to know who and where are the biggest emitters. The World Resources Institute (WRI) has built an open-source database to provide individuals, companies and governments with reliable data about climate change, called the CAIT Climate Data Explorer. Wow! Yellowstone Geyser Erupted and Sent 90 YEARS Worth of Trash Flying Because People Are the Worst - One Green Planet.

Last month, The Ear Spring geyser in Yellowstone National Park erupted, causing the biggest blow in over 60 years … but what came out of the geyser, apart from steam and hot water, is shocking. 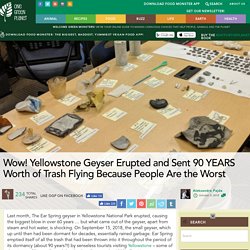 On September 15, 2018, the small geyser, which up until then had been dormant for decades, essentially rained garbage. Ear Spring emptied itself of all the trash that had been thrown into it throughout the period of its dormancy (about 90 years?!) Another Reason to Ditch Plastic! Study Finds Half of Baby Sea Turtles Die From Consuming Plastic - One Green Planet. A recent study by researchers from the Commonwealth Scientific and Industrial Research Organisation (CSIRO) has discovered a new alarming fact about the direct impact of plastic pollution on wildlife. In the study, published in the journal Nature, scientists examined data from almost 1,000 dead turtles and discovered that those youngest appeared to be the most vulnerable to plastic pollution.

Plastic was found in the stomachs of over half of the baby post-hatchlings and around a quarter of slightly older young turtles. In comparison, among adults, around 15 percent were found to be affected. Meat-free diets could cut our 'water footprint' in half, say scientists. Three thousand litres of water – that is the amount needed to produce the food each British person eats every day.

This is according to a new study into the “water footprint” of diets in Western Europe, conducted by the European Commission and published in Nature Sustainability. The term “carbon footprint”, which accounts for all the emissions of CO₂ associated with the manufacture or production of an item, has become commonplace in recent years. Similarly, the “water footprint” of food can be calculated using information on the amount of water required during cultivation and processing.

The authors of this new study, led by EC scientist Davy Vanham, first gathered existing data on the water footprint of various foods and drinks. Human Poop-Powered Bus Hits UK Roads. You wouldn’t think that human poop has many uses, but it turns out that the UK is using brown to go green. As of today, Britain’s first “poo bus” will be shuttling passengers between the city of Bath and Bristol Airport.

And yes, you guessed it: it’s powered by human waste, alongside food waste. This “Bio-bus” runs on biomethane gas, which is produced from the treatment of human sewage and food that is unsuitable for human consumption. It has a combustion engine that is similar to diesel engines in normal buses, but the gas is stored in dome-like tanks on the roof. The gas is generated using anaerobic (oxygen hating) bacteria, which break down the waste into methane-rich gas.

Just one person’s annual food and sewage waste is enough to fuel the bus for 60 kilometers (37 miles). Groundbreaking 'spinning' wind turbine wins UK Dyson award. A ‘spinning’ turbine which can capture wind travelling in any direction and could transform how consumers generate electricity has won its two student designers a prestigious James Dyson award. Nicolas Orellana, 36, and Yaseen Noorani, 24, both MSc students at Lancaster University, have created the O-Wind Turbine which – in a technological first – takes advantage of both horizontal and vertical winds without requiring steering. Conventional wind turbines only capture wind travelling in one direction, and are notoriously inefficient in cities where wind trapped between buildings becomes unpredictable, making the turbines unusable. In 2015 the controversial “Walkie Talkie” skyscraper on London’s Fenchurch Street was thought responsible for creating a wind tunnel which knocked down shop signs and even toppled pedestrians.

Using a simple geometric shape, O-Wind Turbine is designed to make the most of multi-directional wind, generating energy even on the windiest of days. A Greener Festival. How the oceans can clean themselves: Boyan Slat at TEDxDelft. The Ocean Cleanup. More Americans Work in Solar Power Than for Apple, Facebook, and Google Combined. WOW! This Woman Walked the Equivalent of Half of Earth's Circumference to Raise Awareness About Water Pollution - One Green Planet. Impossible Foods is making 500,000 pounds of fake meat a month. Great British Beach Clean. Genius 6th grader invents device that hunts for ocean microplastics. Inside WeWork’s decision to go meat-free. Where and How to Recycle. Not enough plastic recycling plants in the UK - News - Ecosurety. UK’s plastics recycling industry will remain murky unless Government steps in to mend market The UK is presently nowhere near ready to create the number of recycling plants required should the Government decide that all plastic waste must now be recycled on home soil.

The country will therefore need to continue to export its plastic waste overseas and/or incinerate it in the near to mid future, while recycling capacity and the market for plastics is built up in the UK. Share your Coca-Cola bottle pictures. Captain Paul Watson Responds to Report That the Ocean's Wilderness Is Dying With Solutions We Can All Get Behind - One Green Planet. Captain Paul Watson, the avid marine wildlife conservation and environmental activist who founded the Sea Shepherd Conservation Society, has offered us many pieces of wise advice over the years. The world’s first “high-tech eco village” will reinvent suburbs.

6 teens designed this wacky green building of the future. 4 ways to curb our addiction to plastic. iStock. What plastic item would you love to ban? 15 TED speakers tell us. Scott Pruitt Is Gone, But The Trump Administration’s Climate Negligence Remains. KIDS REACT TO CLIMATE CHANGE. The-palm-oil-scandal-boots-and-waitrose-named-and-shamed-1810503. Conservation International. National Geographic Is Ditching Their Plastic Wrapper and Launching a Campaign to Combat Waste! - One Green Planet. National Geographic has announced they will be joining in to help save the planet, whose beauty they have captured for decades, by taking action against plastic pollution. Cellophane Wrap: Its Impact on the Environment and Eco Friendly Brands. Charles Moore: Seas of plastic. The Restart Project - let's fix our relationship with electronics The Restart Project. We calculated how much money trees save for your city.

A million bottles a minute: world's plastic binge 'as dangerous as climate change'. Eat For The Planet. Warm waters melting Antarctic ice shelves may have appeared for the first time in over 7,000 years. Peru ends era of ‘roadless wilderness’ in its Amazon rainforests. We’re climate researchers and our work was turned into fake news. A Call for a Canada Based on Caring for the Earth and One Another. London VegfestUK. Kitchen Trash Bags — Green Alternatives. City to Sea – connecting our actions to our oceans. Surfers Against Sewage. Why eating grass-fed beef isn’t going to help fight climate change. China’s green planning for the world starts with infrastructure. The burger apocalypse: low carbon eating and avoiding food waste.

Styrofoam To Spend Next 500 Years Reflecting On How Well It Protected Blender In Transport. Greenpeace UK - Watch and share our new and improved...