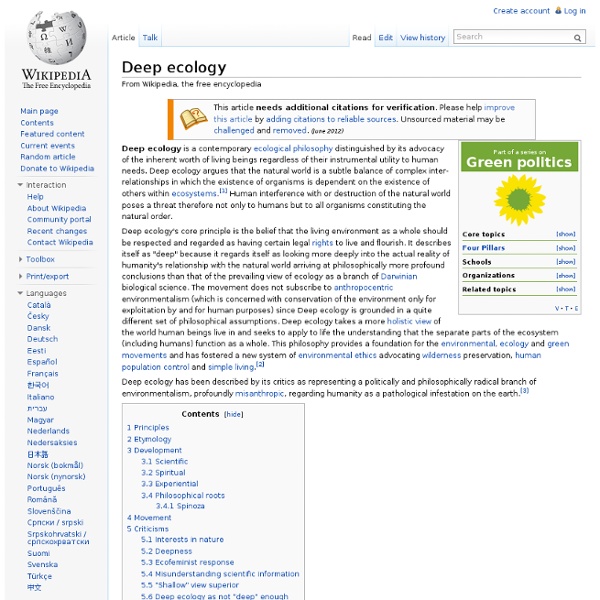 Deep ecology is a contemporary ecological and environmental philosophy characterized by its advocacy of the inherent worth of living beings regardless of their instrumental utility to human needs, and advocacy for a radical restructuring of modern human societies in accordance with such ideas. Deep ecology argues that the natural world is a subtle balance of complex inter-relationships in which the existence of organisms is dependent on the existence of others within ecosystems.[1] Human interference with or destruction of the natural world poses a threat therefore not only to humans but to all organisms constituting the natural order. Deep ecology's core principle is the belief that the living environment as a whole should be respected and regarded as having certain inalienable legal rights to live and flourish, independent of their utilitarian instrumental benefits for human use. Principles[edit] These principles can be refined down into three simple propositions: Development[edit]

Macaroon A macaroon (/mækəˈruːn/ mak-ə-ROON) is a type of light, baked confection, described as meringue-like cookies depending on their consistency. The original macaroon was a "small sweet cake consisting largely of ground almonds"[1] similar to Italian amaretti. The English word macaroon and French macaron come from the Italian maccarone or maccherone. This word is itself derived from ammaccare, meaning to bruise,[2] used here in reference to the almond paste which is the principal ingredient. Origins[edit] The name of the cookie comes from an Italian word meaning paste, maccarone. Italian Jews later adopted the cookie because it has no flour or leavening (macaroons are leavened by egg whites) and can be enjoyed during the eight-day observation of Passover. Regional varieties[edit] Scottish[edit] The Scottish macaroon is a sweet confection with a thick velvety centre covered in chocolate and topped with roasted coconut. North American[edit] Coconut macaroon[edit] Coconut macaroons Dominican[edit]

The promise of a bio-based economy While consumers feel the pain at the pump, crude oil prices have more than doubled over the past five years, and economists continue to express concern that the volatile oil market hampers economic prosperity around the world. Politically, Europe’s dependence on oil and gas imported from Russia has severely limited the region’s ability to respond to the ongoing crisis in Ukraine. Yet our society's dependence on oil will be difficult to break. Despite high costs, hydrocarbons typically remain the cheapest source of energy on the planet. The most promising replacement – bio-based energy – is more viable than people think. For decades, scientists have known that organic biomass can be used to fuel cars, trucks and even airplanes. More complicated types of biomass – corn cobs, wood chips, waste paper – are far more difficult to turn into energy. Today, the greatest challenge is not one of science, but of scale. The bio-based economy would also create jobs. Have your say

Meringue History[edit] Three meringue mushrooms. Each mushroom was made from two stiff, dry, baked pieces of meringue attached with a small amount of melted chocolate. The realistic "dirty" color is created by sprinkling with cocoa powder. It has been claimed that meringue was invented in the Swiss village of Meiringen and improved by an Italian chef named Gasparini in the 18th century.[2] However this claim is contested; the Oxford English Dictionary states that the French word is of unknown origin. Meringues were traditionally shaped between two large spoons, as they are generally at home today. Types of meringue[edit] French meringue is the method best known to home cooks. Chemistry[edit] Beaten egg whites When egg whites are beaten, some of the hydrogen bonds in the proteins break, causing the proteins to unfold ("denature") and to aggregate non-specifically. Sugar substitutes are not useful in meringue. Egg whites and sugar are both hygroscopic (water-attracting) chemicals. Uses[edit]

The Cradle-to-Cradle Alternative By William McDonough & Michael Braungart, ©2003 from State of the World 2004 (Worldwatch / W.W. Norton, 2004) Imagine a world in which all the things we make, use, and consume provide nutrition for nature and industry—a world in which growth is good and human activity generates a delightful, restorative ecological footprint. While this may seem like heresy to many in the world of sustainable development, the destructive qualities of today’s cradle-to-grave industrial system can be seen as the result of a fundamental design problem, not the inevitable outcome of consumption and economic activity. This new conception of design—known as cradle-to-cradle design—goes beyond retrofitting industrial systems to reduce their harm. Cradle-to-cradle design, on the other hand, offers a framework in which the effective, regenerative cycles of nature provide models for wholly positive human designs. Over the past decade, the cradle-to-cradle framework has evolved steadily from theory to practice.

Environmental Ethics 1. Introduction: The Challenge of Environmental Ethics Suppose putting out natural fires, culling feral animals or destroying some individual members of overpopulated indigenous species is necessary for the protection of the integrity of a certain ecosystem. Will these actions be morally permissible or even required? Is it morally acceptable for farmers in non-industrial countries to practise slash and burn techniques to clear areas for agriculture? In the literature on environmental ethics the distinction between instrumental value and intrinsic value (in the sense of “non-instrumental value”) has been of considerable importance. When environmental ethics emerged as a new sub-discipline of philosophy in the early 1970s, it did so by posing a challenge to traditional anthropocentrism. 2. Although nature was the focus of much nineteenth and twentieth century philosophy, contemporary environmental ethics only emerged as an academic discipline in the 1970s. 3. 3.1 Deep Ecology 4. 5. 6.

Green Building Blog What’s missing in green buildings? Training Posted on December 2, 2014 The following post is from Washington State University: More than one-third of new commercial building space includes energy-saving features, but without training or an operator’s manual many occupants are in the dark about how to use them. Julia Day recently published a paper in Building and Environment that for the first time shows that occupants who had effective training in using the features of their high-performance buildings were more satisfied with their work environments. Julia Day She was a WSU graduate student in interior design when she walked into an office supposedly designed for energy efficiency and noticed that the blinds were all closed and numerous lights were turned on. After inquiring, Day learned that cabinetry and systems furniture throughout the building blocked nearly half of the occupants from access to the blind controls. freeimages.com McKinstry honors its favorite teams McKinstry, Avista Corp

Baruch Spinoza Biography[edit] Family and community origins[edit] Spinoza's ancestors were of Sephardic Jewish descent, and were a part of the community of Portuguese Jews that had settled in the city of Amsterdam in the wake of the Alhambra Decree in Spain (1492) and the Portuguese Inquisition (1536), which had resulted in forced conversions and expulsions from the Iberian peninsula.[11] Attracted by the Decree of Toleration issued in 1579 by the Union of Utrecht, Portuguese "conversos" first sailed to Amsterdam in 1593 and promptly reconverted to Judaism.[12] In 1598 permission was granted to build a synagogue, and in 1615 an ordinance for the admission and government of the Jews was passed.[13] As a community of exiles, the Portuguese Jews of Amsterdam were highly proud of their identity.[13] Spinoza's father, Miguel (Michael), and his uncle, Manuel, then moved to Amsterdam where they resumed the practice of Judaism. 17th-century Holland[edit] Early life[edit] Expulsion from the Jewish community[edit]