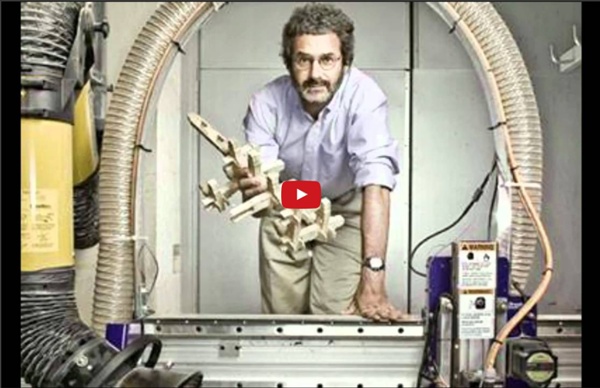 3D Printing and the end of ownership - my plastic future There is a lot of discussion online regarding the possible (inevitable?) copyright/intellectual property/patent/legal fights around personal 3D printing. However, I’ve yet to see anything about a different fight that I have experienced several times now, so I figured I’d write about it and see what others think. Mine, mine, mine! As long as I’ve been printing on my Thing-o-Matic I’ve felt joy, wonder, and a bit of pride over the things I’ve been able to design and 3D print and hold in my hand in a matter of minutes. Several times over the past months that I have been 3D printing things, I’ve misplaced a piece or two here or there; or like today, a whole bag of pieces! And then I realized in one of those physically stumble and grab onto something moments: I can simply replace these “things” by 3D printing more of them. Unlike other items that share this sense of personal ownership, I hadn’t paid money for these items. Questions questions… Do we then lose the wonder of our own pieces?

Kurzweil Warns Retailers at Shop.org to Plan for Major Paradigm Shifts Attendees of this year's Shop.org Summit were treated to a talk by inventor, author and futurist Ray Kurzweil, who said the exponential growth in IT/computing power means the world will be very different in 3 years. He warned retailers to make sure they build change into their plans and business models. "There are major paradigm shifts taking place in 3 years - every sector of society is being transformed, and retail cuts across everything we do," he said. He cited a development that could have a significant impact on retailers and on shipping carriers. Online sellers are already using 3D printers to "manufacture" their products - see this article in EcommerceBytes from June, "Shape of the Future: Make Your Own Products to Sell with Shapeways." Consumers will use augmented reality (AR) in stores, according to Kurzweil, so they will experience virtual reality and real reality at the same time. "Retail is the nexus where technology meets the consumer," he said.

Press Release: OSE-Wikispeed Collaboration Enabling Emerging Markets to Manufacture Their Own Ultra-efficient Transportation, WIKISPEED and Open Source Ecology Announce Partnership in Open-Hardware Movement Seattle, WA, and Maysville, MO, USA (March 7, 2012) The open-hardware movement got a tremendous boost today when WIKISPEED, an innovative automotive company building modular, high-performance cars using agile design principles, and Open Source Ecology (OSE), a group committed to providing free plans and processes necessary for building the global economy, announced that they are teaming up to revolutionize transportation in the developing world. Taking on traditional, proprietary manufacturing R & D, the two companies aim to create an open-source product-development methodology that would allow communities around the world to quickly develop their own machinery and processes to support themselves, removing a dependency on industrialized nations for costly solutions. According to Justice, “This is clearly the right thing to do.

High-end 3D printer art - Boing Boing 3D printers are great for complex engineering projects, but what happens when you try to get creative with it? Most artists obsessed with digital fabrication opt for milling machines or laser etching–which are cheaper and easier to access–but some have stuck with rapid prototyping (aka rapid manufacturing) because building ultra-precise objects out of nothing is undeniably awesome. Can you imagine if Torolf Sauermann tried to make this snail shell-esque math art using a pottery kiln? NY art collective Commonwealth made the body of this mask with light-sensitive plastic in a stereo lithographic printer and then spent 20 hours attaching strands of pony hair to it. Designer Janne Kyttanen made this iPod shoulder bag using laser sintered polyamide. New York native Roxy Paine makes cool machines like automatic sculpture maker called the SCUMAK, which spits out randomly-shaped red-pigmented plastic blobs onto a conveyor belt at random intervals. Photo: Brad Estes

3D Printing With a 3D printer for public use and Maker programs every month, your Library is the place to bring your ideas to life. Make It @ Your Library "Think left and think right and think low and think high. Oh, the thinks you can think up if only you try!" Dr. Seuss You can do it too! Using the 3D Printer Thanks to a grant from the U.S. Design your 3D Object: Use a 3D modeling software to create your object. More Information Take a look at our FAQ. For inspiration and downloadable 3D files, visit thingiverse.com, Trimble 3D Warehouse, yeggi.com. Should your library try 3D printing?

Who will get the biggest slice of 3D-printed pie? | Crave MakerBot's Bre Pettis says his 3D printers are for everyone. 3D Systems' Cathy Lewis begs to differ. Each spokesperson made a strong pitch during our 3D printing roundtable at this year's Consumer Electronic Show. Who's right? 3D Systems: Old guard expertise 3D Systems announced its Cube 3D printer at CES this year, but the company has been involved with additive manufacturing and rapid prototyping since 1986. Along with its forthcoming $1,299 Cube, 3D Systems will also sell you its Sinterstation Pro DM250 (PDF), a $1 million machine that can print usable metal hip implants. Between the Cube and Sinterstation, 3D Systems offers 3D printers, laser-based stereolithography machines, and other additive manufacturing products for customers ranging from hobbyists to industrial and mechanical engineers. Cubify primarily offers two services. Cubify also lets designers sell their plans as standalone files. Does Cubify incorporate DRM or offer some other IP protection? "Nothing," Kulkarni said.

Why 3-D Printing Will Go the Way of Virtual Reality Update: Tim Maly has published an excellent counterpoint to this post over at the Tech Review Guest blog. There is a species of magical thinking practiced by geeks whose experience is computers and electronics—realms of infinite possibility that are purposely constrained from the messiness of the physical world—that is typical of Singularitarianism, mid-90s missives about the promise of virtual reality, and now, 3-D printing. As 3-D printers come within reach of the hobbyist—$1,100 for MakerBot’s Thing-O-Matic—and The Pirate Bay declares “physibles” the next frontier of piracy, I’m seeing usually level-headed thinkers like Clive Thompson and Tim Maly declare that the end of shipping is here and we should all start boning up on Cory Doctorow’s science fiction fantasies of a world in which any object can be rapidly synthesized with a little bit of energy and raw materials. Let’s start with the mechanism. Most 3-D printers lay down thin layers of extruded plastic.

Open P2P Design Workshop: Singapore 2009 01. Open P2P Design workshop, in Singapore After the Seoul workshop, I flew to Singapore for another Open P2P Design workshop with Roger Pitiot at the School of Art, Design & Media of the Nanyang Technological University. The Singapore workshop took place as one of the event of the Singapore Design Festival 2009 and was organized with the help of professor Fabrizio Galli, who organized there a workshop that is already almost a FabLab. The workshop was one day shorter than the Seoul one (and the last day was an Islamic Holiday), we started with around 19 students and ended with around 10 students. 02. 03. Here are the presentations of the lectures Massimo Menichinelli gave during the workshops: 04. We had encountered some problems with the accounts names in Seoul, and therefore we decided to choose easier name for such a short workshop, and we used the name of some of the protagonists of Quentin Tarantino‘s movie Reservoir Dogs: Mr. 05. Let’s consider some issues regarding the tools:

Why Your Library May Soon Have Laser Cutters and 3-D Printers Ben Wiseman Visit the downtown branch of the Chattanooga Public Library and you'll find the usual stuff: rows of books, magazines, and computers. But walk up to the fourth floor and there's something unexpected. When it opened in spring 2013, the maker floor—formerly unused and filled with decrepit equipment—became a massive hit, and up to 1,200 patrons attended events there. Chattanooga and Cleveland aren't the only cities giving this new kind of library a try. Ezra Reynolds is an example. But what about books? You have to give the librarians credit.

First 3-D Printing Store Opens In U.S. The 3-D printing world just took another big leap into the consumer market. Next stop: world domination? MakerBot, the unofficial leader of the hobbyist 3-D printing movement, is putting the finishing touches on a consumer store located in the posh Manhattan neighborhood of NoHo. Sure, the rare 3-D printer can be found in the corners of business service centers across the United States. If the new business proves successful, 3-D printing stands to expand from a relatively high-cost hobbyist venture into a mainstream consumer market. "This is the first retail 3-D printing store" in the United States, said spokesperson Jenny Lawton from inside the shop. On the heels of today's announcement the company also unveiled a 3-D printer called Replicator 2. "It sets the standard in desktop 3-D printing," said MakerBot CEO Bre Pettis during a press briefing. Things From the Thingiverse Pettis and others founded MakerBot Industries in Brooklyn in 2009. 3-D World Domination?

Legal battles loom as home 3D printing grows | Sci-Tech | Deutsche Welle | 26.01 The controversial website The Pirate Bay announced this week that it would begin hosting digital files for visitors to download and print out on their 3D printers. The site has coined a new word - "Physibles" - for data objects capable and feasible of becoming physical. "We believe that things like three-dimensional printers, scanners and such are just the first," the group wrote on its website. "We believe that in the nearby future you will print your spare parts for your vehicles." The site has faced extensive legal battles in its home country of Sweden over potential intellectual property infringement of digital content. Last year, a UK team built a 3D-printed model plane 3D printing, which has long existed in the industrial world, has meanwhile gained traction in hobbyist community. An unclear judicial landscape Last year, Dutch designer Ulrich Schwanitz developed a 3D object, called "impossible triangle," which he sold through the 3D design company Shapeways.

At last: a low-cost, professional-grade light-based 3D printer Form 1 (credit: Formlabs) Formlabs’ new Form 1 3D printer could bring professional-grade 3-D prints to the home workshop. Desktop 3-D printing has largely been the domain of extrusion-based machines like MakerBot’s Replicator and homebrew RepRap designs. These lag behind the capabilities of pricier, professional stereolithography devices, where UV light cures incredibly thin layers of resin to create objects on par with manufactured goods. Developing this type of printer at a consumer price point has been an elusive goal until now. The Form 1 is a desktop-sized machine that creates professional-grade, light-cured 3-D prints, Wired reports. Their prototype units are fully functional and Formlabs will finance manufacturing via a Kickstarter campaign that broke their $100,000 target in 2.5 hours. Initial backers will be able to pre-order the Form 1 for $2,299 (only 25 will be available at this price); additional units are priced at $2499 and $2699, based on order of contribution. How it works