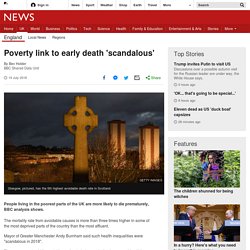 The mortality rate from avoidable causes is more than three times higher in some of the most deprived parts of the country than the most affluent. Mayor of Greater Manchester Andy Burnham said such health inequalities were "scandalous in 2018". The government said it was taking action to help people live longer and healthier lives. The BBC's Shared Data Unit analysed data from the Office for National Statistics with deprivation data for local authority areas in England and Wales, as well as comparable data for Scotland and Northern Ireland. Our analysis found a strong correlation between deprivation and the number of people dying prematurely. Inequality gap widens as 42 people hold same wealth as 3.7bn poorest. The development charity Oxfam has called for action to tackle the growing gap between rich and poor as it launched a new report showing that 42 people hold as much wealth as the 3.7 billion who make up the poorest half of the world’s population. 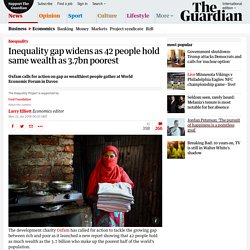 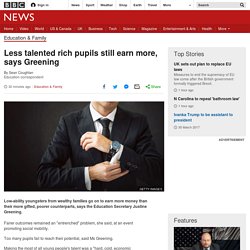 Fairer outcomes remained an "entrenched" problem, she said, at an event promoting social mobility. Too many pupils fail to reach their potential, said Ms Greening. Making the most of all young people's talent was a "hard, cold, economic imperative," she said. "Children from high-income backgrounds who show signs of low academic ability at age five, are 35% more likely to become high earners than their poorer peers who show early signs of high ability," Ms Greening told a Social Mobility Commission event. Ms Greening said giving a fairer opportunity to all pupils remained a "really hard long slog".

In her own family, she said she was the first to go to university. He was "frustrated that he felt they didn't really talk about his life," she said. Bosses' incomes are 386 times higher than living wage. Image copyright PA Bosses of the UK's 100 biggest firms earn 386 times more than workers on the National Living Wage, a survey found. 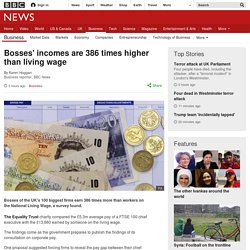 The Equality Trust charity compared the £5.3m average pay of a FTSE 100 chief executive with the £13,660 earned by someone on the living wage. The findings come as the government prepares to publish the findings of its consultation on corporate pay. One proposal suggested forcing firms to reveal the pay gap between their chief executives and average workers. The government's green paper on corporate governance was opened to public consultation in November.

Other suggestions aimed at curbing corporate pay included improving the effectiveness of remuneration committees and the extent to which they must consult shareholders and workers on executive pay levels. Record levels of poverty in working families. Reality Check: Has inequality been getting worse? The claim: Levels of inequality in the UK have been getting worse. 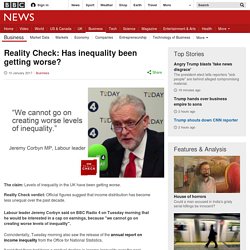 Reality Check verdict: Official figures suggest that income distribution has become less unequal over the past decade. Labour leader Jeremy Corbyn said on BBC Radio 4 on Tuesday morning that he would be interested in a cap on earnings, because "we cannot go on creating worse levels of inequality". Coincidentally, Tuesday morning also saw the release of the annual report on income inequality from the Office for National Statistics.

It said that there had been a gradual decline in income inequality over the past decade. It is using the Gini Coefficient, which is a measure of inequality - in this case, a coefficient of zero would mean that all households had the same income while 100 would mean that one household had all the income. These figures are for disposable income, which is what you get after you've added benefits and subtracted direct taxes such as income tax and council tax. What could be missing from this analysis? University to lower entry grades for poor. A leading university is to increase its intake of disadvantaged students by offering places with reduced grades. 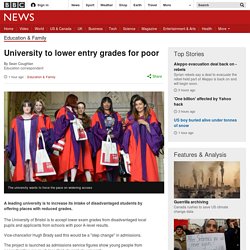 The University of Bristol is to accept lower exam grades from disadvantaged local pupils and applicants from schools with poor A-level results. Vice-chancellor Hugh Brady said this would be a "step change" in admissions. Nearly half of Britons 'see background as key to success' Image copyright Thinkstock Nearly half of UK adults believe where people end up in life is mainly down to their background and parentage, a survey has suggested. 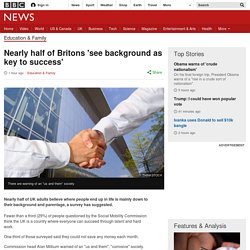 Fewer than a third (29%) of people questioned by the Social Mobility Commission think the UK is a country where everyone can succeed through talent and hard work. One-third of those surveyed said they could not save any money each month. Grammar schools: PM seeks to ensure places for poorer pupils. Image copyright Getty Images The expansion of grammar schools in England will be accompanied by conditions requiring them to take a proportion of children from low-income families, the prime minister will say. 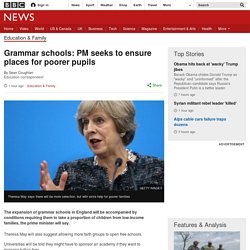 Theresa May will also suggest allowing more faith groups to open free schools. Universities will be told they might have to sponsor an academy if they want to increase tuition fees. Mrs May will say a "belief in social mobility" drives the plans, but Labour says they will "entrench inequality". In a major policy speech on meritocracy, the prime minister will say: "For too long we have tolerated a system that contains an arbitrary rule preventing selective schools from being established - sacrificing children's potential because of dogma and ideology. "The truth is that we already have selection in our school system - and it's selection by house price, selection by wealth. 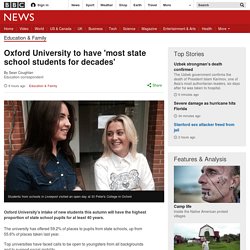 The university has offered 59.2% of places to pupils from state schools, up from 55.6% of places taken last year. Top universities have faced calls to be open to youngsters from all backgrounds and to support social mobility. How do people justify earning more than others? Image copyright iStock There's been much discussion over WPP boss Martin Sorrell earning £63m in a year. 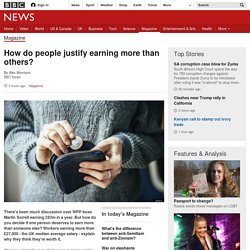 But how do you decide if one person deserves to earn more than someone else? Workers earning more than £27,000 - the UK median average salary - explain why they think they're worth it. "If I have a bad day I could do serious harm or kill a patient. That level of responsibility has to be reflected in the pay," says Zoe Norris. Wealth of richest 1% 'equal to other 99%'

Image copyright Getty Images The richest 1% now has as much wealth as the rest of the world combined, according to Oxfam. It uses data from Credit Suisse from October for the report, which urges leaders meeting in Davos this week to take action on inequality. How much inequality is too much? Image copyright iStock The richest 10% of Americans earn half of all of income.

In Britain, the top 10% hold 40% of all the income. Inequality isn't just an issue for rich countries: a billion people have been lifted out of poverty since 1990, but inequality has also been rising in many countries too. Four experts talk to the BBC World Service Inquiry programme about the effect inequality has on growth and prosperity. Deirdre McCloskey: Capitalism is not the enemy Deirdre McCloskey is Distinguished Professor of Economics, History, English, and Communication at the University of Illinois at Chicago.