History of U.S. Military Interventions since 1890 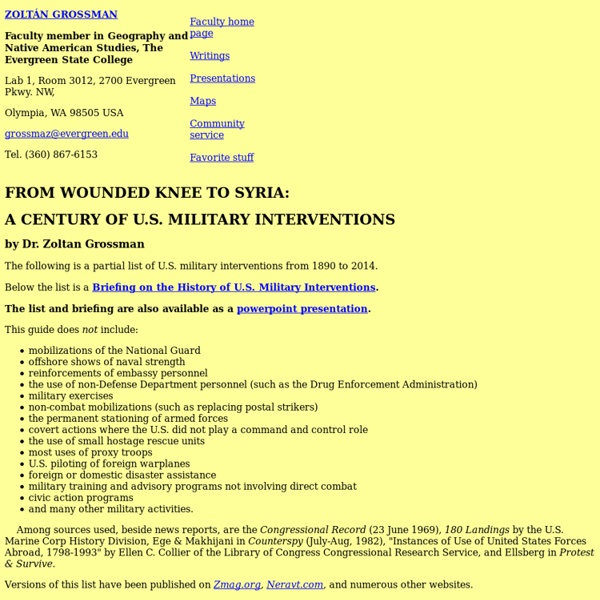 by Dr. Zoltan Grossman The following is a partial list of U.S. military interventions from 1890 to 2014. Below the list is a Briefing on the History of U.S. Military Interventions. The list and briefing are also available as a powerpoint presentation. This guide does not include: mobilizations of the National Guard offshore shows of naval strength reinforcements of embassy personnel the use of non-Defense Department personnel (such as the Drug Enforcement Administration) military exercises non-combat mobilizations (such as replacing postal strikers) the permanent stationing of armed forces covert actions where the U.S. did not play a command and control role the use of small hostage rescue units most uses of proxy troops U.S. piloting of foreign warplanes foreign or domestic disaster assistance military training and advisory programs not involving direct combat civic action programs and many other military activities. Quotes in Christian Science Monitor and The Independent Related:  War! Who is it good for?

The Part-Time Employment Ratio: Up Slightly in March Let's take a close look at Friday's employment report numbers on Full and Part-Time Employment. Buried near the bottom of Table A-9 of the government's Employment Situation Summary are the numbers for Full- and Part-Time Workers, with 35-or-more hours as the arbitrary divide between the two categories. The Labor Department has been collecting this since 1968, a time when only 13.5% of US employees were part-timers. That number peaked at 20.1% in January 2010. The latest data point, over four years later, is only modestly lower at 18.9%, up from 18.8% last month, which was the interim low. Here is a visualization of the trend in the 21st century, with the percentage of full-time employed on the left axis and the part-time employed on the right. The Impact of the Great Recession Here is a closer look since 2007. The two charts above are seasonally adjusted and include the entire workforce, which the CPS defines as age 16 and over. The Core Workforce: Ages 25-54

Money For Wars Expert Says Beheadings in U.S. Look Like Work of Cartels Three beheadings in two different states and they happened here in the United States, not Mexico. Former DEA supervisor Phil Jordan says all three beheadings have cartel written all over them. They happened in Arizona and Oklahoma in the past year. A murder mystery is now unraveling on a stretch of North Reservation Road in Tucson, Ariz. "It would lead me to believe the message wanted to be sent. Jordan says the cartels are getting bolder in carrying out their beheadings across the border. "They don't have any borders," says Jordan. More than 600 miles from the border, a 19-year-old human trafficking victim was found beheaded in Oklahoma. "People know if they get on the wrong side of the fence, they'll be dealt with," says Jordan. The police chief in the area says two men running the trafficking ring killed Saunders to send a message to the other victims. "Definitely a cartel hit," says Jordan. "One is too many; two is too many.

Why we f*ck A professional thinker named Thomas Hobbes got it into our heads for an embarrassingly long time that our ancestors were pitiful, lonely, mean people. Three and a half centuries later Hobbes is still revered for his smarts, even though he’ll always be most famous for that unfortunate soundbyte in which he described the life of prehistoric man as “solitary, poor, nasty, brutish and short.” Today few serious scientists are waving the “brutish and short” flag. Although the image of the paranoid, dumb, violent, solitary caveman persists in pop culture (and sometimes in our early blog posts) there’s little evidence to support it. We now know human beings have always been highly social creatures, and that that has been our species’ defining strength. As an interesting side-effect of rethinking what human quality of life was like in prehistory, it’s becoming clear that for all but the most recent sliver of human existence, human beings were not monogamous. And we know they had lots of hot sex.

2011 military intervention in Libya From the beginning of the intervention, the initial coalition of Belgium, Canada, Denmark, France, Italy, Norway, Qatar, Spain, UK and US[25][26][27][28][29] expanded to nineteen states, with newer states mostly enforcing the no-fly zone and naval blockade or providing military logistical assistance. The effort was initially largely led by France and the United Kingdom, with command shared with the United States. NATO took control of the arms embargo on 23 March, named Operation Unified Protector. An attempt to unify the military command of the air campaign (whilst keeping political and strategic control with a small group), first failed over objections by the French, German, and Turkish governments.[30][31] On 24 March, NATO agreed to take control of the no-fly zone, while command of targeting ground units remains with coalition forces.[32][33][34] The handover occurred on 31 March 2011 at 06:00 UTC (08:00 local time). Proposal for the no-fly zone[edit] Chronology[edit] [edit]

The United States of ALEC BILL MOYERS: This week on Moyers & Company… Privatizing America one statehouse at a time. JOHN NICHOLS: Through ALEC, you can change the whole country without ever going to Washington, without ever having to go through a congressional hearing, without ever having to lobby on Capitol Hill, without ever having to talk to a president. BILL MOYERS: The United States of ALEC. ANNOUNCER: Funding is provided by: Carnegie Corporation of New York, celebrating 100 years of philanthropy, and committed to doing real and permanent good in the world. The Kohlberg Foundation. Independent Production Fund, with support from The Partridge Foundation, a John and Polly Guth Charitable Fund. The Clements Foundation. Park Foundation, dedicated to heightening public awareness of critical issues. The Herb Alpert Foundation, supporting organizations whose mission is to promote compassion and creativity in our society. The Bernard and Audre Rapoport Foundation. The John D. Anne Gumowitz. The Betsy And Jesse Fink Foundation.

War Or Civilization? 10 Ways the War on Drugs is a Wild Success Eric BlairActivist Post For all the evidence of how the War on Drugs has failed society, there's equally as much evidence of how it is a great success to those who continue to support it. The drug war has many advantages if you wish to control society and expand your empire. It also enriches several industries that would otherwise have a very difficult time staying solvent without it. Here are ten ways the War on Drugs is a wild success: Military-Industrial Profits: As the Vietnam War came to an end, it struck fear into the military-industrial machine that enjoyed great profits from that conflict. Huge Boon to Private Prisons: The private prison industry thrives off long sentences for drug offenders. Prevents Higher Unemployment Rates: Imagine if the millions of American currently jailed on drug charges were released into a job market already suffering from real unemployment numbers over 20%. Protects Big Pharma Monopolies: No one is happier about the war on drugs than Big Pharma.

OBAMA vs ROMNEY: Here's Who's Right About The Economy United States–Yemen relations Traditionally, United States – Yemen relations have been tepid, as the lack of strong military-to-military ties, commercial relations, and support of Yemeni President Ali Abdullah Saleh has hindered the development of strong bilateral ties. During the early years of the George W. Bush administration, relations improved under the rubric of the war on terror, though Yemen's lax policy toward wanted terrorists has stalled additional United States support.[1] According to the 2012 U.S. Country Comparison[edit] History[edit] The United States established diplomatic relations with the Imamate in 1947. On December 7, 1967, the United States recognized the People's Democratic Republic of Yemen and elevated its Consulate General in Aden to embassy status. The United States was actively involved in and strongly supportive of parliamentary elections in 1993 as well as the 2006 presidential and local council elections, and continues working to strengthen Yemen's democratic institutions. Gallery[edit]

Related:
Related:  War! Who is it good for?