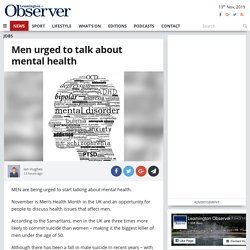 November is Men’s Health Month in the UK and an opportunity for people to discuss health issues that affect men. According to the Samaritans, men in the UK are three times more likely to commit suicide than women – making it the biggest killer of men under the age of 50. How Video Games Strengthen Men's Friendships and Fight Loneliness.

MEN ARE LONELY, or so we’ve heard. 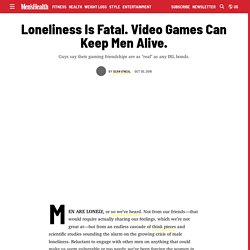 Not from our friends—that would require actually sharing our feelings, which we’re not great at—but from an endless cascade of think pieces and scientific studies sounding the alarm on the growing crisis of male loneliness. Reluctant to engage with other men on anything that could make us seem vulnerable or too needy, we’ve been forcing the women in our lives to shovel our shit, becoming “emotional gold diggers” in the process. The most cloistered among us have retreated into a sort of petulant nihilism, finding strength in toxic web forums filled with self-righteous anger and Jordan Peterson quotes, a modern-day Fight Club where the first rule is never shutting up about it.

Having more friends won't magically fix these problems—the real solution is therapy, folks—but we could all stand to get better at making and keeping friends, because social isolation is deadly. In 2014, former Surgeon General Vivek H. Brian, 53, has a similar story. Dr. Dr. Healthy Men: Why are we ignoring the epidemic of white male suicides? - Chicago Tribune. Why the APA Guidelines for Men's Mental Health Are Misguided. The American Psychological Association (APA) recently released its ‘Guidelines for Psychological Practice with Boys and Men’ in a 31-page document. 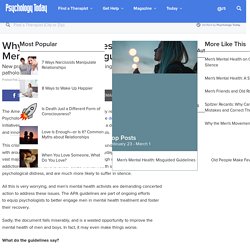 Any new initiatives on this topic should be welcome, as there is a desperate need for action and innovation to address the men's mental health crisis. This crisis takes various forms. Comment on the APA Guidelines for the Treatment of Boys and Men. Beware the Ideologues in Psychologists’ Clothing The American Psychological Association (APA) recently released their Guidelines for Psychological Practice with Boys and Men (paralleling, in principle, their 2007 guidelines for girls and women). 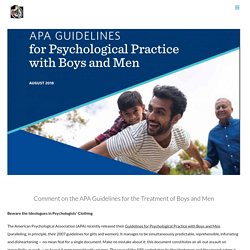 It manages to be simultaneously predictable, reprehensible, infuriating and disheartening — no mean feat for a single document. Seasonal Affective Disorder Affects Women and Men (Who Ignore It) Seasonal affective disorder is a form of depression tied to the change of the seasons. 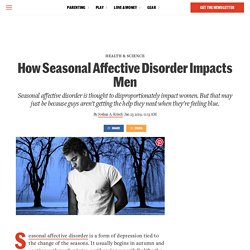 It usually begins in autumn and continues through winter, until spring mercifully lifts the veil. Men and women can both fall victim to seasonal depression, but women are far more likely to report the condition and seek help. So the harmful misconception—that seasonal affective disorder doesn’t affect men—persists, in both the minds of the general public and in the scientific literature. Seasonal Affective Disorder Affects Women and Men (Who Ignore It) Why are men afraid to talk about mental health - key questions answered - Hull Live. A dedicated mental health support worker has lifted the lid on what it's like dealing with men who are too scared to open up about mental health. 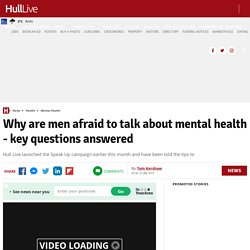 Sam Bell from Hull and East Yorkshire Mind has said men feel "less acceptable" to talk about their feelings - but it was vital in being able to "get better". Sam, who works at Mind situated on Beverley Road, has revealed the first steps about recognising a mental health illness is to speak out - to anyone. The experienced mental health worker cited "listening and talking" as being the best kick-starters for anyone with mental health problems to get the help they need.

PsycNET. - The Washington Post. Dealing With Depression as a Man. Need Therapy? A Good Man Is Hard to Find. Men's deaths preventable if they sought help from GP or spoke about mental health says new report from World Health Organisation. TOO many European men die young from preventable causes according to a new report by the World Health Organisation. 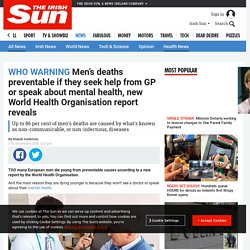 And the main reason they are dying younger is because they won’t see a doctor or speak about their mental health. Alamy While men are living longer, healthier lives, the most common causes of death for males across the continent aged between 30-59 are cardiovascular diseases, cancer, diabetes and respiratory illnesses as well as injuries. Mental Health Providers Need to Reach Young Men Before More Lives Are Lost - Juvenile Justice Information ExchangeJuvenile Justice Information Exchange.

When thinking about the June 20 murder of Lesandro “Junior” Guzman-Feliz and its impact on his family and the Bronx community, it is important to acknowledge the tragic loss of life and that there are untold consequences associated with this tragedy. 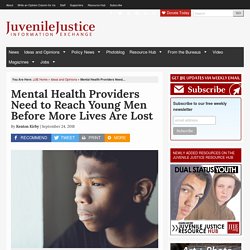 A life was cut short. And while we hold this young man’s name and memory in our minds, we must acknowledge the root of this violence. We must explore the disparities in access to mental health treatment in communities of color. Kenton Kirby Like other New Yorkers, I was horrified by the violent murder of 15-year old Guzman-Feliz at the hands of other young people in his community. While we must rally around the family that’s experienced such a tragic loss, we must also look at the internal struggles going on among the young men who caused this harm.

Better mental health support needed for men! - Employee Benefits. Suicide is the biggest killer of men under 50 in the UK! 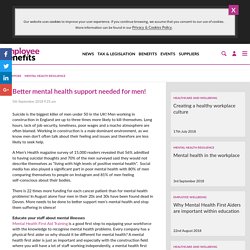 Men working in construction in England are up to three times more likely to kill themselves. Long hours, lack of job security, loneliness, poor wages and a macho atmosphere are often blamed. New fathers may undergo hormonal, neural and behavioural changes. There is a lot known about the hormonal changes in mothers, but do they compare to what happens in new fathers? 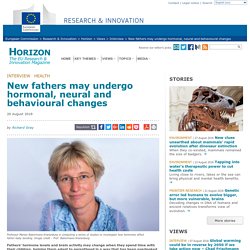 ‘Mothers undergo major changes naturally during pregnancy and after they give birth. We know that during and after birth the levels of a hormone called oxytocin go up immensely in mothers. Oxytocin derives its name from the ancient Greek word for swift birth because it causes contractions during labour and so can improve the birth experience.

It also helps to start lactation for breastfeeding, but it also has other functions. ‘Oxytocin plays a role in relaxation and it may impair memory. ‘Fathers do not go through such a dramatic hormonal explosion, much less happens to them physically, but there is some evidence that they too experience hormonal and neural changes.’ 5% of new fathers may need treatment for postnatal depression – but no one is talking about it. How sheds can help men stave off loneliness after retirement – according to our new research. When people hear the word shed, they may think about a rickety wooden building at the bottom of a garden crawling with spiders, filled with old paint tins, a lawnmower and out-of-date weedkiller.

It has also been associated with the term “man cave” – a space where a man spends time on his own, tinkering with junk or avoiding his partner. But our new research found there was more to the humble shed than meets the eye – mainly thanks to a revolutionary social programme which is fighting loneliness. Loneliness is a key challenge for contemporary times and while it can be experienced by people of any age, it can impact older people particularly. The number of people over the age of 65 who live in the UK continues to increase and 3.6m older people live alone. Age UK found that for many older people their main source of activity is watching television. Men committing suicide on the rise. Boys and men disappearing from psychology. Males are disappearing from the field of North American psychology — both as research subjects and as psychotherapists. The evidence is overwhelming that psychological research is becoming heavily focused on girls’ and women’s issues, and that males are rapidly vanishing from psycho-therapeutic professions.

The consequences of these dual trajectories, say specialists, is that the distinct emotional struggles of boys and men are largely being sidelined and that many psychotherapists are lacking expertise in dealing effectively with males’ psychological difficulties. A revealing study led by the University of B.C.’s Robinder Bedi found the vast majority of 293 research articles published over a 13-year period in the influential Canadian Journal of Counselling and Psychotherapy centred on female-specific topics. Research articles exclusively on female subjects out-numbered those on male subjects by four to one, Bedi discovered.

Healthy-magazines. Untitled. It’s Time to Stop Blaming Men for Their Mental Health Woes. Many mental health campaigns consistently encourage people to spend more time talking. These campaigns consider talking as a sign of emotional literacy and essential to the development of positive mental health and psychological resilience. The More Young Men Are Bathed in Femininity, the More 'Toxic Masculinity' You Will See. Doctors warn masculinity forces men into loneliness. As the world reels in the wake of Anthony Bourdain's suicide, experts warn he is just one of many men whose suicides and preceding struggles with mental illness often go overlooked. Men in the US kill themselves at 3.5-times the rate that women do but may be less likely to seek medical help or community support. In comparison to New Zealand, for every woman that dies by suicide, three men do.

In 2017, an alarming 606 people were reported to have killed themselves. That's one person dead every 15 hours. 80-year Harvard study uncovers the secret to happiness. Avoiding the Toxicity of Blue Pill Psychotherapy. Viral Pornhub Depression Tweet Makes Point About Getting Help. Postpartum Depression in Men: The Men's Mental Health Issue No One Is Taking About. Misandry in Psychology Part One. The Movement That Has Men Dropping Out of Society in a 'Sexodus' Some are calling it the sexodus. "It" is the growing trend among young men to opt out of relationships with women and with society. Men who find the philosophy attractive eschew dating, leave the traditional workforce and spend a lot of time alone or online. There's even a group devoted to the practice called Men Going Their Own Way (MGTOW, pronounced "mig-tow").

Unlike traditional men's rights groups, which push back against feminism with activism of their own, the MGTOW movement advocates that males reject long-term relationships, earn only as much money as needed to sustain life and a few simple pleasures, and just disengage from society. Much interaction takes place online in forums like Reddit, with lots of discussion of getting sexual needs met while eschewing long-term relationships with women. The impetus for the sexodus is feminism, say Emilie Aries and Bridget Todd, co-hosts of the podcast Stuff Mom Never Told You. With good reason. Hopefully the sexodus is a temporary phase.

Men's mental health is facing a silent crisis. Featured Illustration by Xulin Wang. Misandry in Psychology Part One. The biggest threat facing middle-age men isn’t smoking or obesity. It’s loneliness. LET’S START WITH THE MOMENT I realized I was already a loser, which was just after I was more or less told that I was destined to become one. I’d been summoned to an editor’s office at the Globe Magazine with the old “We have a story we think you’d be perfect for.” Gender empathy gap BPS SW Review Barry Winter 2016 author copy. Middle-aged men missing out on friendship can face physical and mental health risks - Health - ABC News. Imagine waking up one day and realising — aside from your partner or family — you have no-one to talk to. No close friend to call if you have lost your job, no shoulder to cry on if your parents are gone and no-one to support you if your relationship breaks down. This is the reality many men face as they head into middle age.

A new psychology for men. Psychology clings to a universal model – that men are incorrigibly flawed and require a dismantling of their identities, habits, and preferences before being reconstructed according to a feminist model of masculinity. All modern therapies have this basic premise in common. Men's Mental Health Network – Just another Voices of Men Network site.