We Are the 99 Percent 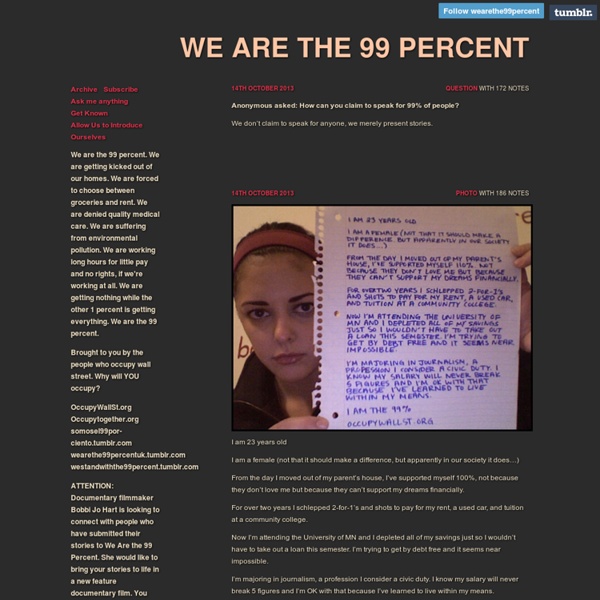 14th October 2013 Question with 172 notes Anonymous asked: How can you claim to speak for 99% of people? We don’t claim to speak for anyone, we merely present stories. 14th October 2013 Photo with 186 notes I am 23 years old I am a female (not that it should make a difference, but apparently in our society it does…) From the day I moved out of my parent’s house, I’ve supported myself 100%, not because they don’t love me but because they can’t support my dreams financially. For over two years I schlepped 2-for-1’s and shots to pay for my rent, a used car, and tuition at a community college. Now I’m attending the University of MN and I depleted all of my savings just so I wouldn’t have to take out a loan this semester. I’m majoring in journalism, a profession I consider a civic duty. I am the 99%. occupywallst.org 14th October 2013 Question with 12 notes Anonymous asked: We are the 99 percent- Why don't we RECALL these extremist NUTS that are in Washington, DC.??!!!! 9th September 2013 Thank you!

William Pfaff: American Government’s Indifference to Popular Protest American Government’s Indifference to Popular Protest Posted on Oct 5, 2011 By William Pfaff The obvious is not easily seen when you don’t want to see it. The Wall Street sitdown, and the copycat sitdowns elsewhere in the U.S., were suddenly discovered by the mainstream press last weekend (rather against its own inclinations, it seems, since the uprising of “Indignation”—“los indignados” in Spain where it all started—has in one way or another been going on in Spain, Portugal, France and Israel since the summer began). The revolution begins at home What is occurring on Wall Street right now is truly remarkable. For more than two weeks, in the sanctum of the great cathedral of global capitalism, the dispossessed have liberated territory from the financial overlords and their police army. They have created a unique opportunity to shift the tides of history in the tradition of other great peaceful occupations from the sit-down strikes of the 1930s to the lunch-counter sit-ins of the 1960s to the democratic uprisings across the Arab world and Europe today. While the Wall Street occupation is growing, it needs an all-out commitment from everyone who cheered the Egyptians in Tahrir Square, said “We are all Wisconsin”, and stood in solidarity with the Greeks and Spaniards. This is a movement for anyone who lacks a job, housing or healthcare, or thinks they have no future. Our system is broken at every level.

#occupywallstreet Austerity measures are eroding America’s public school system. With massive increases in school closures and class cancellations, advocates say educational opportunities for students of all ages are increasingly being diminished. This is not a new problem, per se. ‘Occupy Wall Street’ Protests Turn Violent; Video Shows Police Macing Women Sep 25, 2011 1:03pm (Tina Fineberg/AP Photo) ABC News’ Olivia Katrandjian reports: Video posted by the group Occupy Wall St from the eighth day of protests against corporations show police using Tasers and mace to control the crowd, which the group says has only made it more committed to keep up the demonstrations in lower Manhattan for the long haul. A New York Police Department spokeswoman today confirmed the group’s claim that approximately 80 people were arrested Saturday, mainly for disorderly conduct and obstructing vehicular and pedestrian traffic. “One person was arrested for assaulting a police officer,” she said.

Who are the 99 percent? (Ramin Talaie - BLOOMBERG) “I did everything I was supposed to and I have nothing to show for it.” It’s not the arrests that convinced me that “Occupy Wall Street” was worth covering seriously. Nor was it their press strategy, which largely consisted of tweeting journalists to cover a small protest that couldn’t say what, exactly, it hoped to achieve. It was a Tumblr called, “We Are The 99 Percent,” and all it’s doing is posting grainy pictures of people holding handwritten signs telling their stories, one after the other. “I am 20K in debt and am paying out of pocket for my current tuition while I start paying back loans with two part time jobs.” On the Verge of Chaos The core outlook of the righteously angry is strongly anti-banker, anti-rich and anti-corruption; it expresses a powerful sentiment against the system and the market. People are proclaiming that they are not commodities to be bought and sold. Theirs is a quest for change and transformation.

#Occupy Sesame Street UPDATE! We now have even more photos from Occupy Sesame Street. Stay tuned to Tauntr for all the latest news regarding this historic movement. Occupy Wall Street is a major movement both on the streets and on the web, but it isn’t getting the media attention it deserves. AnonOps Communications One account. All of Google. Sign in to continue to Blogger Find my account Forgot password?