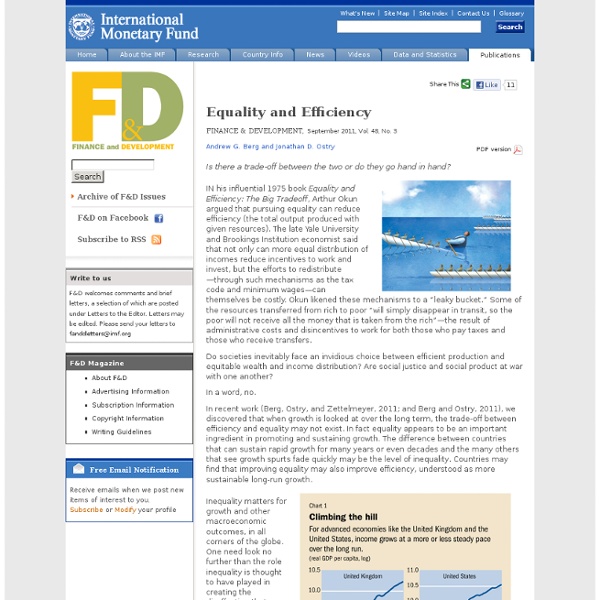 Finance & Development, September 2011, Vol. 48, No. 3 Andrew G. Berg and Jonathan D. Ostry PDF version Is there a trade-off between the two or do they go hand in hand? IN his influential 1975 book Equality and Efficiency: The Big Tradeoff, Arthur Okun argued that pursuing equality can reduce efficiency (the total output produced with given resources). Do societies inevitably face an invidious choice between efficient production and equitable wealth and income distribution? In a word, no. In recent work (Berg, Ostry, and Zettelmeyer, 2011; and Berg and Ostry, 2011), we discovered that when growth is looked at over the long term, the trade-off between efficiency and equality may not exist. Inequality matters for growth and other macroeconomic outcomes, in all corners of the globe. How do economies grow? The experiences in developing and emerging economies, however, are far more varied (see Chart 2). Income distribution and growth sustainability Hazard to sustained growth Cameroon is typical. Related:  TESIS GRIS SOCIAL DETERMINANTS HEALTH

The Greater Recession: America Suffers from a Crisis of Productivity - Derek Thompson - Business In fact, real wages for middle class men have declined by 28 percent since 1969, according to a report from the Hamilton Project. For men without a high school degree, they've fallen by a whopping 66 percent. "Stagnation is too weak a word," said Michael Greenstone, author of the report. "This is decline." "The decline in earnings shakes the core of the American Dream." Economists got it wrong, Greenstone said, because they compared wages among all working men rather than among all "working-age" men. "This decline in the earnings opportunities for men has had profound influences on American society," Greenstone said. This finding has deep implications. ALL ABOUT PRODUCTIVITY(or: If We're Working Less, Who's Working More?) Americans have a complicated relationship with productivity. Don't ask David Allen to explain this. We know where the jobs are going -- to machines, software, and foreign workers. What's so bad about 1950s wages, anyway? Poverty is overrated. It doesn't end there.

Finance & Development, December 2010 - Leveraging Inequality Finance & Development, December 2010, Vol. 47, No. 4 Michael Kumhof and Romain Rancière PDF version Long periods of unequal incomes spur borrowing from the rich, increasing the risk of major economic crises THE United States experienced two major economic crises over the past 100 years—the Great Depression of 1929 and the Great Recession of 2007. Are these two facts connected? Shifting wealth We looked at the evolution of the share of total income controlled by the top 5 percent of U.S. households (ranked by income) compared with ratios of household debt to income in the periods preceding 1929 and 2007 (see Chart 1). In the more recent period (1983–2007), the difference between the consumption of the rich and that of the poor and middle class did not widen as much as the differences in incomes of these two groups. In other words, the increase in the ratios of debt to income shown in Chart 1 was concentrated among poor and middle-class households. Modeling the facts Policy options References

Europe’s Debt Crisis Has Become a German Identity Crisis “Germans, we don’t look to see what’s in our own national interest,” says Frank Schäffler. “We’re drunk with Europe.” Schäffler, a member of the Bundestag, Germany’s lower house of Parliament, is speaking on the phone from his home district of Bünde. The debt crisis in Europe has become a crisis of German identity. Schäffler is a member of the Free Democrats, a small party of what Americans would call libertarians, serving as the junior coalition partners to Angela Merkel’s much larger and more conservative Christian Democrats. Barely a year later, Greece is even closer to default, and Merkel is sending back a new treaty amendment that would replace the temporary “facility” with a permanent “mechanism”—a blueprint, in other words, for future bailouts. Among those who have lent their names to Schäffler’s pledge is Burkhard Hirsch, who represented the Free Democrats in the Bundestag over three decades, including four years as the body’s vice-president.

Why the Rich Are Getting Richer The U.S. economy appears to be coming apart at the seams. Unemployment remains at nearly ten percent, the highest level in almost 30 years; foreclosures have forced millions of Americans out of their homes; and real incomes have fallen faster and further than at any time since the Great Depression. Many of those laid off fear that the jobs they have lost -- the secure, often unionized, industrial jobs that provided wealth, security, and opportunity -- will never return. They are probably right. And yet a curious thing has happened in the midst of all this misery. This is what the political scientists Jacob Hacker and Paul Pierson call the "winner-take-all economy." To continue reading, please log in. Don't have an account? Register Register now to get three articles each month. As a subscriber, you get unrestricted access to ForeignAffairs.com. Register for free to continue reading. Registered users get access to three free articles every month. Have an account?

Finance & Development, September 2011 - Unequal = Indebted Finance & Development, September 2011, Vol. 48, No. 3 Michael Kumhof and Romain Rancière PDF version Higher income inequality in developed countries is associated with higher domestic and foreign indebtedness ECONOMISTS have long worried about the growing chasm between countries that borrow heavily internationally and those that dish out the loans. But there is another, domestic dimension to the pileup of international obligations. Why the United States has built such persistent and large deficits in its current account—which covers all noninvestment international transactions, including exports and imports, dividends and interest, and remittancese—is a matter of some debate. In current research we therefore extend the work reported in “Leveraging Inequality” (F&D, December 2010), which dealt with only the United States, to include an open-economy dimension. Modeling the facts An economic model can clearly illustrate these links between income inequality and current account deficits.

Wall Street’s Euthanasia of Industry Michael interviewed on Guns N Butter with Bonnie FaulknerListen here “When I was in Norway one of the Norwegian politicians sat next to me at a dinner and said, “You know, there’s one good thing that President Obama has done that we never anticipated in Europe. He’s shown the Europeans that we can never depend upon America again. There’s no president, no matter how good he sounds, no matter what he promises, we’re never again going to believe the patter talk of an American President. Mr. Topics: The jobless recovery; the debt ceiling and default charade; China; Greece: banks, not countries, receive the bailouts; financial warfare; IMF and EU; European Central Bank; US credit default swaps; US agricultural exports create food dependency; currency devaluation devalues the price of labor; class war of banks against the rest of society. I’m Bonnie Faulkner. That’s why the stock market is down 160 points today. Somebody has to lose when loans go bad. This is happening throughout the world.

Where Is Our Oil Price Collapse? From Jim Quinn of The Burning Platform Where Is Our Oil Price Collapse? Make no mistake about it, without plentiful, cheap, and easy to access oil, the United States of America would descend into chaos and collapse. The fantasies painted by “green” energy dreamers only serve to divert the attention of the non critical thinking masses from the fact our sprawling suburban hyper technological society would come to a grinding halt in a matter of days without the 18 to 19 million barrels per day needed to run this ridiculous reality show. “The peaking of world oil production presents the U.S. and the world with an unprecedented risk management problem. In the six years since this report there has been unprecedented oil price volatility as the world has reached the undulating plateau of peak cheap oil. But, a funny thing happened on the way to another oil price collapse. Some short term factors will continue to support higher oil prices. Surging Developing World Demand A Plunging US Dollar

Free exchange: All men are created unequal INEQUALITY is one of the most controversial attributes of capitalism. Early in the industrial revolution stagnant wages and concentrated wealth led David Ricardo and Karl Marx to question capitalism’s sustainability. Twentieth-century economists lost interest in distributional issues amid the “Great Compression” that followed the second world war. But a modern surge in inequality has new economists wondering, as Marx and Ricardo did, which forces may be stopping the fruits of capitalism from being more widely distributed. “Capital in the Twenty-First Century” by Thomas Piketty, an economist at the Paris School of Economics, is an authoritative guide to the question. The book suggests that some 20th-century conventional wisdom was badly wrong. The centrepiece of Mr Piketty’s analysis is the ratio of an economy’s capital (or equivalently, its wealth) to its annual output. Pre-1914 economies were very unequal. Victorian values

Riad Marrakech, Location Riad Marrakech, Riads Marrakech, Riad Maroc Hotel Maroc The art of business and the science of economics Business and economics are tied up together in lots of people's minds. After all, they're both about money, aren't they? An awful lot of people seem to believe that economics is Big Business and business is small economics. (Even the generally reliable Economist magazine seems to use this definition in deciding what should go in its business or economics sections.) The failure to keep the two apart leads to some bizarre misconceptions in the popular understanding. Business is the art of commerce. Sure there are skills that are important for successful business life - like managing people well, knowing how to make a spreadsheet, giving great powerpoint - but there’s nothing academic about them. So why does business studies exist as an independent academic subject? Secondly, business professionals want a useable economics and are willing to pay for it. Economics is scientific in the sense that its positive goal is the disinterested study of economic phenomena. Two kinds of utilitarianism

John Lanchester · The Non-Scenic Route to the Place We’re Going Anyway: The Belgian Solution · LRB 8 September 2011 Quarterly GDP data don’t, on the whole, tend to make the person studying them laugh out loud. The most recent set, however, are an exception, despite the fact that the general picture is of unrelieved and spreading economic gloom. Instead of the surge of rebounding growth which historically accompanies successful exit from a recession, we have the UK’s disappointing 0.2 per cent growth, the US’s anaemic 0.3 per cent and the glum eurozone average figure of 0.2 per cent. That number includes the surprising and alarming German 0.1 per cent, the desperately poor French 0 per cent and then, wait for it, the agreeably frisky Belgian 0.7 per cent. Why is that, if you’ve been following the story, laugh-aloud funny? Because Belgium doesn’t have a government. I’m told that the cliché du jour in financial markets involves reference to ‘uncharted territory’. A normal Republican Party would seize the opportunity to put a long-term limit on the growth of government. Would that matter?

Human Development Reports | United Nations Development Programme Too Big to Fail Not Fixed, Despite Dodd-Frank: Simon Johnson Here we go again. Major shocks potentially threaten the solvency of some of the world’s largest financial institutions. Concerns grow over the ability of European leaders to shore up their banks, which are reeling from a sovereign-debt crisis. Private conversations among economists, regulators and fund managers turn naturally to so-called resolution powers -- the expanded ability to take over and wind down private financial companies granted to federal regulators by the Dodd-Frank financial reform law. Instead, the government was forced to rely on the bankruptcy process, as in the case of Lehman Brothers Holdings Inc., or complete bailouts for all creditors, as in the case of American International Group. Imposing Losses If it determines that a bank has failed, the FDIC is able to protect retail depositors fully, while wiping out shareholders and imposing losses as appropriate on creditors. Preemptive Use No Early Action Third, who would lose money in any potential liquidation?